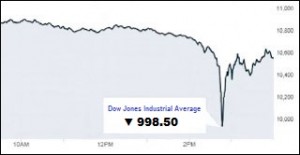 The U.S. Justice Department is relying on Americans’ gullibility with its arrest of a 36-year old in the U.K., charging him as a key culprit in the Flash Crash of the stock market on May 6, 2010. London newspapers report the young man trades from his bedroom in his parents’ middle class row house.

The arrest came on the same day that news broke that Loretta Lynch was speeding toward a confirmation vote in the U.S. Senate as the next U.S. Attorney General, meaning that current U.S. Attorney General Eric Holder is making his last hurrah after failing to prosecute any bigwigs on Wall Street throughout his tenure, notwithstanding their insidious role in the greatest financial collapse since the Great Depression.

The first problem with the Justice Department’s complaint against the bedroom spoofer is that the complaint has gone missing. What was released to the public consists of a one-pager stating that there is a complaint, followed by an affidavit from an FBI agent and a one-page Exhibit A which shows trading prices on an S&P 500 futures contract from 11:00 to 11:12 – far removed from when the Flash Crash occurred in the afternoon.

The press release issued by the Justice Department tells us that “Navinder Singh Sarao, 36, of Hounslow, United Kingdom, was arrested today in the United Kingdom, and the United States is requesting his extradition.  Sarao was charged in a federal criminal complaint in the Northern District of Illinois on Feb. 11, 2015, with one count of wire fraud, 10 counts of commodities fraud, 10 counts of commodities manipulation, and one count of ‘spoofing,’ a practice of bidding or offering with the intent to cancel the bid or offer before execution.”

However, the actual complaint that would provide specifics of these counts is missing from what was released by the U.S. Justice Department.

Another problem in this case is that the FBI agent, Gregory Laberta, appears to be getting the bulk of his theories and trading analysis from “representatives of an economic consulting group retained in connection with this investigation who have reviewed relevant trading and order book data.” Both the names of the representatives and the name of the consulting group are withheld.

The crux of the allegations is that Sarao put downward pressure on market prices via the E-Mini Standard and Poor’s 500 futures contract. The FBI agent’s affidavit states: “Between 12:33 p.m. and 1:45 p.m., SARAO placed 135 sell orders consisting of either 188 or 289 lots, for a total of 32,046 contracts.”

Just as the original finger pointing at the mutual fund company Waddell and Reed made no sense, neither do these allegations. As we reported in 2010:

“The so-called Flash Crash report was the product of the Commodity Futures Trading Commission (CFTC) and Securities and Exchange Commission (SEC) and consists of 104 pages of data that is unintelligible to most Americans, including the media that are so confidently reporting on it.  It names no names, including the firm it is fingering as the key culprit in setting off the crash.  Earlier media reports say the firm is the mutual fund manager, Waddell and Reed, and Waddell has conceded that it made a large trade that day to hedge its positions in its mutual funds which total $70 billion according to its web site.

“As the official report goes, Waddell set off a computerized algorithm to sell 75,000 contracts of the E-mini futures contract that is based on the Standard and Poor’s 500 stock index and trades at the Chicago Mercantile Exchange.  At roughly $55,000 per contract, the total amount Waddell was seeking to sell to hedge its mutual fund stock positions was $4.125 billion.

“But here’s where the official theory comes apart: fourteen days after the Flash Crash, Terrence Duffy, the Executive Chairman of the CME Group which owns the Chicago Mercantile Exchange testified before the U.S. Senate’s Subcommittee on Securities, Insurance, and Investment of the Committee on Banking, Housing and Urban affairs that “Total volume in the June E-mini S&P futures on May 6th was 5.7 million contracts, with approximately 1.6 million or 28 per cent transacted during the period from 1 p.m. to 2 p.m. Central Time.”  In other words, the government investigators are suggesting that a trade that represented 1 per cent of the day’s volume in a futures contract in Chicago and less than 5 per cent of contracts traded in the pivotal 1 to 2 p.m. time frame in Chicago (2 to 3 p.m. in New York) caused stocks in the cash market to plunge to a penny.”

The official reports in 2010 focused heavy suspicions on two trading firms that went unnamed, other than Waddell and Reed. We filed a Freedom of Information Act request for the names of those firms and our request was denied. There’s your smoking gun.

“Detailed analysis of trade and order data revealed that one large internalizer (as a seller) and one large market maker (as a buyer) were party to over 50 per cent of the share volume of broken trades, and for more than half of this volume they were counterparties to each other (i.e., 25 per cent of the broken trade share volume was between this particular seller and buyer).”

Our analysis at the time:

“Broken trades or ‘busts’ (as the street refers to them) were only allowed for trades occurring between 2:40 p.m. and 3 p.m. (New York time) and where the stock had moved 60 per cent or more from its 2:40 p.m. value.  This was an extremely controversial decision and left small investors with heavy losses of 30 to 59 per cent with nowhere to turn.  The busts that were allowed covered 5.5 million shares and two-thirds of these trades had been executed at less than $1.00, some for as little as a penny.  We now learn from this one sentence on page 66 of the Flash Crash report that half of the share volume in these bizarre trades came from just two firms and half the time they were exclusively trading with each other. Let me state this another way: two trading firms were predominantly involved in handing investors’ losses of 60 per cent or more in their stocks on May 6 but a staid old mutual fund company trading an S&P  futures contract in Chicago has been fingered as the culprit of the Flash Crash.”

If Eric Holder thinks this arrest of a bedroom trader in the U.K. is going to bolster his legacy, good luck with that.