What If Janet Yellen Is Dead Wrong on the Strength of the U.S. Economy? 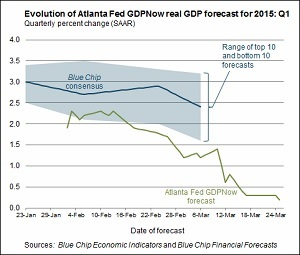 Yesterday, economists at the Atlanta Fed’s Center for Quantitative Economic Research notched down their forecast for real GDP growth – the seasonally adjusted annual rate – to a tepid 0.2 percent for the first quarter of 2015. The revision from the earlier forecast of 0.3 percent followed yesterday’s durable goods report that showed a dramatic decline of 1.4 percent in February on a seasonally adjusted basis. Durable goods are products like refrigerators, washing machines or computers, items expected to last for at least three years. Because durable goods carry higher price tags than most other consumer outlays, a weakening in durable goods can be a warning of a tapped out or retrenching consumer.

This first quarter forecast stands at odds with the Federal Reserve Board’s FOMC statement of March 18, 2015 which singled out “strong job gains” and rising household spending.

One notable area of Federal Reserve myopia appears to be the credit tightening impact of a rising U.S. Dollar. As of mid March, the greenback has risen by more than 22 percent on a trade-weighted basis over the past year. This creates serious headwinds in a number of areas. First, U.S. goods priced in dollars become more expensive and thereby less competitive in foreign markets. That hurts the earnings of the big U.S. based multi nationals and leads to job cuts. It can also hurt smaller businesses that rely on exports for a significant part of their earnings.

The rising dollar also raises the very real danger that the U.S. begins to import deflation. As foreign goods reach our shores priced in the cheaper currency, consumers are likely to opt for the best price, thus bringing down further the already subpar rate of inflation. At the end of last year, ten of our trading partners were in the throes of outright deflation while another seven registered inflation of less than one-half of one percent.

The “strong job gains” assessment announced by the Federal Reserve in its FOMC statement on March 18 came against a torrent of job cut announcements in the thousands since mid December of last year. Those included: American Express, 4000; Coca Cola, 1600 to 1800; IBM, at least 2000 with rumors suggesting the number is far higher; Schlumberger, 9000; Baker Hughes 7000; U.S. Steel 750; Halliburton 6400.

On February 3, Jim Clifton, the Chairman and CEO of Gallup, the polling organization, penned a statement on the company’s web site calling the official unemployment rate “The Big Lie.” Clifton made these salient points:

Since Clifton wrote his essay, the U.S. Labor Department reported that the official unemployment rate fell further — to 5.5 percent on March 5.

There is rising concern that if the Federal Reserve and Fed Chair Janet Yellen turn out to have been dead wrong on the prospects for the U.S. economy, then they’ve created not one, but two, bubbles – the stock market and the U.S. Dollar. Wagers on the continued climb in the Dollar have become a very crowded bet around the globe. If everyone heads for the exits at the same time, it could get very messy. 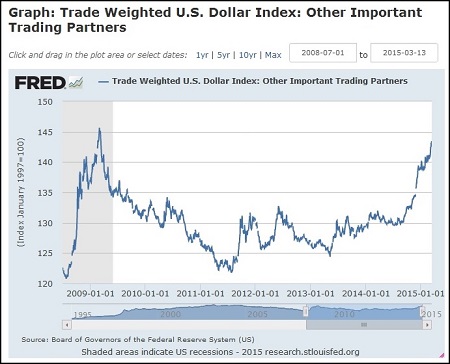