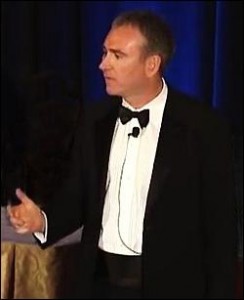 Ken Griffin, Owner of Hedge Fund Citadel, Giving a Speech at the Economic Club of Chicago

There are theories floating around Wall Street that Barron’s Senior Editor and award-winning investigative reporter with a law degree from Columbia, Bill Alpert, has been kidnapped by evil forces on Wall Street and replaced with a look-alike. How else to explain this wacky story under his byline on February 28.

Alpert’s article was quickly discredited by Eric Hunsader of Nanex in an article titled “Robber Barrons.” (We don’t think Hunsader meant to say “Barons” either.) Themis Trading, whose owners literally wrote the book on Broken Markets, weighed in with a detailed debunking.

Alpert’s article starts out with this subhead: “Small investors actually get good prices from brokers and market makers.” It then moves to debunk the Michael Lewis book Flash Boys, which is effectively debunking 60 Minutes as well, since it vetted and aired the same material. Alpert writes:

“In the furor surrounding last year’s best-seller Flash Boys, by Michael Lewis, many retail investors were spooked by the book’s claim that high-frequency traders use their technology edge to pick off the little guys, who, the author claims, were ‘easy kill’ for the professionals. That part of the story was just wrong.”

The above statement from Alpert would mean that not only did Michael Lewis and 60 Minutes get it wrong, but when Senator Elizabeth Warren stated the following in a Senate hearing on June 18, 2014, she was dead wrong as well. (This hearing, by the way, was effectively censored by the corporate business media.)

Warren: “High frequency trading reminds me a little of the scam in Office Space. You know, you take just a little bit of money from every trade in the hope that no one will complain. But taking a little bit of money from zillions of trades adds up to billions of dollars in profits for these high frequency traders and billions of dollars in losses for our retirement funds and our mutual funds and everybody else in the market place. It also means a tilt in the playing field for those who don’t have the information or have the access to the speed or big enough to play in this game.”

Alpert’s article would also mean that the former prosecutors from the U.S. Justice Department who form the legal powerhouse known as Robbins Geller Rudman & Dowd LLP, whose bread and butter is securities fraud, don’t know what they’re talking about either. Robbins Geller has filed a lawsuit in the matter and references pages from Flash Boys in their complaint:

“Notwithstanding their legal obligations and duties to provide for orderly and honest trading and to match the bids and orders placed on behalf of investors at the best available price, the Exchange Defendants and those Defendants that controlled alternate trading venues demanded and received substantial kickback payments in exchange for providing the HFT [high frequency trading] Defendants access to material trading data via preferred access to exchange floors and/or through proprietary trading products.  Likewise, in exchange for kickback payments, the Brokerage Firm Defendants provided access to their customers’ bids and offers, and directed their customers’ trades to stock exchanges and alternate trading venues that the Brokerage Firm Defendants knew had been rigged and were subject to informational asymmetries as a result of Defendants’ scheme and wrongful course of business, all of which operated to the detriment of Plaintiff and the Class.

“Defendants’ predatory practices included the Brokerage Firm Defendants selling ‘special access’ to material data, including orders made by Plaintiff and the Plaintiff Class so that the HFT Defendants could then trade against them using the informational asymmetries and other market manipulation detailed herein.  Flash Boys at 168-72 and 242-43.” (See High Frequency Trading Lawsuit Filed by City of Providence, Rhode Island (Full Text) )

Alpert really pops readers’ eyes open when he claims that “the biggest average price benefit was delivered by Citadel Securities, the market-making unit of Citadel, whose chief is hedge fund manager Ken Griffin…” then goes on to make the case (try to contain your laughter) that there is a wealth transfer going from Wall Street to Main Street. Alpert writes:

“With big players like Citadel and KCG battling for market share in the past two years, RegOne estimates that average price improvement per share at the top eight market makers has doubled from 0.27 of a cent per share to 0.56 of a cent. Those amounts look small, but so are spreads on most stocks. Across hundreds of billions of shares, it has resulted in a wealth transfer from Wall Street to Main Street worth more than a $1 billion in recent years…”

Citadel’s generosity and wealth transfer to the little guy doesn’t quite compute with Ken Griffin, who is in his 40s, moving in the span of a year from a net worth of $5.2 billion in 2014 to $6.5 billion in 2015, according to Forbes. Nor does it compute with a report we did last August which found that Citadel has been fined and/or sanctioned for market misconduct 26 times according to Financial Industry Regulatory Authority (FINRA) records. It wasn’t just the quantity of violations but the nature of the violations that were deeply problematic. As we previously reported:

“On June 25, 2014, Citadel Securities LLC…was fined a total of $800,000 by its various regulators for serious trading misconduct. Citadel paid the fines in the typical manner, without admitting or denying the charges. This is what the New York Stock Exchange said Citadel had done: ‘The firm sent multiple, periodic bursts of order messages, at 10,000 orders per second, to the exchanges. This excessive messaging activity, which involved hundreds of thousands of orders for more than 19 million shares, occurred two to three times per day.’

“In addition, according to the York Stock Exchange, Citadel ‘erroneously sold short, on a proprietary basis, 2.75 million shares of an entity causing the share price of the entity to fall by 77 percent during an eleven minute period.’

“In another instance, according to the New York Stock Exchange, Citadel’s trading resulted in ‘an immediate increase in the price of the security of 132 percent.’

“On January 9, 2014, the New York Stock Exchange charged Citadel Securities LLC with engaging in wash sales 502,243 times using its computer algorithms. A wash sale is where the buyer and the seller are the same entity and no change in beneficial ownership occurs. (Wash sales are illegal because they can manipulate stock prices up or down. They played a major role in the rigged stock market that crashed in 1929.) Citadel paid a $115,000 fine for these 502,243 violations and walked away…”

Wall Street On Parade filed a Freedom of Information Act request with the Securities and Exchange Commission for information on how Citadel operates its dark pool, Apogee. We were flatly turned down. See SEC Response to FOIA Request for Information on Citadel’s Dark Pool, Apogee

In June of last year, Wall Street On Parade took another look at how the little guy was being treated by Wall Street. Citadel didn’t come up looking too good in that analysis either. We found that “dark pools are seducing retail brokerage firms with payment for order flow to get their customers orders directed to their dark pool – pulling liquidity from the stock exchanges. According to TD Ameritrade’s Rule 606 Report for the first quarter of 2014, it directed its stock trades in both New York Stock Exchange listed stocks and Nasdaq stocks in direct proportion to the largest amounts being paid to it in payment for order flow by three market venues: Direct Edge, Citadel, and Citigroup Global Markets.”

Bill Alpert, and Barron’s, need to take a second look at the analysis that went into their story and balance it with a much broader look at Citadel.