Is Nothing Sacred at JPMorgan? 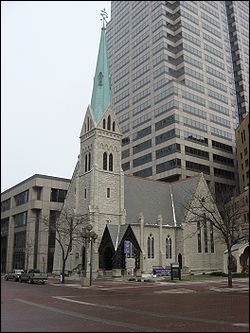 JPMorgan appears incredibly adroit at ever creative means of running its reputation through the mud. Last August the Christ Church Cathedral in Indianapolis filed a lawsuit in Federal Court alleging that its endowment funds meant to feed and shelter homeless families and children, keep food banks stocked, and give exhausted pastors a sabbatical, ended up as a wealth transfer scheme at JPMorgan.

The complaint alleges that JPMorgan engaged in “self-dealing,” made “fraudulent misrepresentations,” omitted material facts about their “widespread and profound conflicts of interests and created “toxic investment products” which resulted in “the surreptitious transfer of wealth from the Christ Church Trusts to JPMorgan.”

At the time of the filing of the lawsuit last August, wire services around the globe picked up the story; it then spread to U.S. newspapers and religious publications like Christianity Today. Now the story is back in the headlines with an expanded article yesterday by Bloomberg News reporter Neil Weinberg that reveals yet another church endowment, the Sandscrest Foundation which benefits the Episcopal Diocese of West Virginia, has made similar allegations in a lawsuit against JPMorgan.

The lawsuits open a window on the frequently conflicted role of trustees at today’s mega banks. These banks create their own mutual funds, structured products and private equity investments, which can have enormous hidden fees buried in the transactions. Serving as trustees to hundreds of billions of dollars in endowment funds, there is an untoward temptation to select the products most profitable to their own business rather than what is in the best interest of the nonprofit client.

The Christ Church lawsuit has thus far made little headway in court. JPMorgan’s lawyers have filed motions for dismissal and requested to have additional time to answer the charges. In other words, the case is proceeding as all cases proceed in Federal court against a Wall Street mega bank – very slowly.