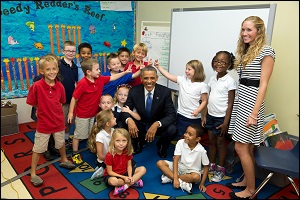 Expect to See Upbeat Photos of the President this Week as He Hits the Road. The President is Shown Here in September 2014 with Elementary Students at a School at MacDill Air Force Base in Tampa, Florida. (Official White House Photo by Pete Souza.)

Yesterday was not an illustrious start to the first full week of the new year. The Dow Jones Industrial Average plunged 331 points on global deflation worries; U.S. crude oil dropped below $50 for the first time since 2009, with West Texas Intermediate touching $48.47 at one point on the New York Mercantile Exchange. The benchmark 10-year U.S. Treasury note, whose yield is a harbinger of future economic activity, traded below 2 percent and is yielding 1.97 percent in early morning trade today.

In a strong signal that other economies are weakening around the globe, 10-year sovereign debt instruments in Australia, Austria, Belgium, Finland, France, Germany, Japan, Netherlands and the U.K. set record low yields yesterday.

Against that backdrop, columnist Paul Krugman might have wished he hadn’t penned these opening words on page A17 of the New York Times yesterday: “Suddenly, or so it seems, the U.S. economy is looking better. Things have been looking up for a while, but at this point the signs of improvement — job gains, rapidly growing G.D.P., rising public confidence — are unmistakable.”

The only thing unmistakable is that President Obama, Paul Krugman, and Federal Reserve Chair Janet Yellen keep telling us things are looking up while the bellwethers of economic activity, yields on the 10-year U.S. Treasury note and 30-year U.S. Treasury bond are fading toward record lows, along with sovereign debt around the world.

Is political rhetoric as reliable as the composite wisdom of a vast global market of sovereign debt? Of course not. Was there ever any question that we were going to escape the greatest wealth and income inequality since the 30s without deflation? Of course not.

As we explained in detail on this page in August of last year, “there is a finite equilibrium of income distribution at which the U.S. economy, or any other economy, can sustain momentum without artificial stimulus. In the U.S., 70 percent of U.S. Gross Domestic Product (GDP) is consumption. When workers are stripped of an adequate share of the nation’s income, they cease to be the levers of economic growth.”

As President Franklin D. Roosevelt explained during the Great Depression: “Do what we may have to do to inject life into our ailing economic order, we cannot make it endure for long unless we can bring about a wiser, more equitable distribution of the national income.”

With markets in turmoil, deflation worries now making it into headlines and just 14 days left before the President’s State of the Union address on January 20, President Obama wants to change the subject. Thus, the President is planning a road trip this week to redirect the public focus to what he plans to do to spur job growth, home ownership and educational opportunities. And, of course, there will be lots of homespun photos from as far away from Wall Street or Washington as he can get in a day’s hop. (Besides, burning through some jet fuel might help the oil inventory glut.)

The President will travel to the Detroit area on Wednesday for a pep talk on the revival of the U.S. auto industry and ways of spurring good U.S. manufacturing jobs. On Thursday, it’s a hop to Phoenix to discuss new initiatives to advance home ownership for more Americans. Vice President Joe Biden and his wife, Jill, are slated to accompany the President on a trip to Tennessee on Friday to discuss helping “more Americans go to college and get the skills they need to succeed,” according to the White House.

Globally interlinked markets are not particularly deferential or accommodating to Presidential road trips. The President may find himself juggling uncomfortable questions on plunging industrial commodity prices and negative Consumer Price Indexes around the globe. If the President genuinely wants to help his country, which we believe he does, he’ll stop listening to the happy chatter from advisors with no sense of Wall Street history or the Great Depression, and carefully study the chart below.