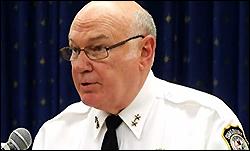 On Thursday, November 20, 2014, the body of 54-year old Melissa Millan, a divorced mother of two school-age children, was found at approximately 8 p.m. along a jogging path running parallel to Iron Horse Boulevard in Simsbury, Connecticut. A motorist had spotted the body and called the police.

According to the coroner’s report, it was determined that Millan’s death was attributable to a stab wound to the chest with an “edged weapon.” Police ruled the death a homicide, a rarity for this town where residents feel safe enough to routinely jog by themselves on the same path used by Millan.

Information has now emerged that Millan had access to highly sensitive data on bank profits resulting from the collection of life insurance proceeds from her insurance company employer on the death of bank workers – data that a Federal regulator of banks has characterized as “trade secrets.”

Millan was a Senior Vice President with Massachusetts Mutual Life Insurance Company (MassMutual) headquartered in Springfield, Massachusetts and a member of its 39-member Senior Management team according to the company’s 2013 annual report. Millan had been with the company since 2001.

According to Millan’s LinkedIn profile, her work involved the “General management of BOLI” and Executive Group Life, as well as disability insurance businesses and “expansion into worksite and voluntary benefits market.”

BOLI is shorthand for Bank-Owned Life Insurance, a controversial practice where banks purchase bulk life insurance on the lives of their workers. The death benefit pays to the bank instead of to the family of the deceased. According to industry publications, MassMutual is considered one of the top ten sellers of BOLI in the United States. Its annual reports in recent years have indicated that growth in this area was a significant contributor to its revenue growth.

Banks as well as other types of corporations enjoy major tax benefits through the use of this type of insurance. The cash buildup in the policies contribute to annual earnings on a tax-free basis while the death benefit is received free of Federal income tax when the employee eventually dies. Even if the worker is no longer employed at the bank, it can still collect the death benefit. Banks owning BOLI routinely conduct “death sweeps” of public records using former employees’ Social Security numbers to determine if a former employee has died. It then submits a claim request for payment of the death benefit to the insurance company.

Four of Wall Street’s largest banks are the largest owners of BOLI according to December 31, 2013 data from the Federal Financial Institutions Examination Council (FFIEC), holding a combined total of $68.1 billion. The four banks’ individual BOLI assets are as follows as of the end of last year:

The BOLI assets, however, support a far greater amount of life insurance coverage in force on the workers’ lives – potentially as much as a ten to one ratio – meaning that just these four banks could be holding $681 billion on the lives of their current and past employees.

Since details on the number of workers insured and the annual amounts that big Wall Street banks report as profits on the death of their current and former workers are closely guarded secrets, in March of this year Wall Street On Parade wrote to the regulator of national banks, the Office of the Comptroller of the Currency (OCC), asking for BOLI information under the Freedom of Information Act.

Because JPMorgan Chase has experienced a number of tragic deaths among young workers in their 30s this year, we asked the OCC for the number of deaths from 2008 through March 21, 2014 on which JPMorgan Chase collected death benefits; the total face amount of BOLI life insurance in force at JPMorgan; the total number of former and current employees of JPMorgan Chase who are insured under these policies; and any peer studies showing the same data comparing JPMorgan Chase with Bank of America, Wells Fargo and Citigroup.

The OCC responded to our request on April 18, 2014, advising that they did have documents responsive to our request but that all documents were going to be withheld because they were “privileged or contains trade secrets, or commercial or financial information, furnished in confidence, that relates to the business, personal, or financial affairs of any person,” or  relate to “a record contained in or related to an examination.” (See OCC Response to Wall Street On Parade’s Request for Banker Death Information).

It is noteworthy that JPMorgan Chase, Bank of America, Wells Fargo and Citigroup are all publicly traded companies with shareholders. Under securities law, shareholders have a right to material information on how the company is making its profits. An investor who wants to own the shares of a well-run bank whose business model is to make prudent loans to businesses or loans to responsible retail customers, should have a right to know how much of a bank’s profits are coming from the unseemly practice of collecting death benefits on its workers.

While the OCC refused to provide this information, Millan was among a limited group outside of Federal regulators who was in a position to have broad data on the death benefit claims being submitted by multiple banks. Having data across multiple banks could have facilitated the type of peer review studies we had requested from the OCC – trade secrets that Wall Street does not want to allow into the sunshine.

In the past eight years, Millan had received two important promotions at MassMutual according to corporate press releases, elevating her into the role of Senior Management. In October 2006, she was promoted to Senior Vice President of Product Management from the post of Corporate Vice President of the Disability Insurance and Long Term Care Insurance operations.

On July 1, 2011, Millan assumed the leadership “of an expanded and centralized services and operations division” that included “business underwriting and operations, as well as claims.”

There is evidence that Millan did use internal studies to see trends. On September 18, 2013, MassMutual released a 2013 Employer Perspectives on Disability Benefits study showing inadequate coverage of some workers in case they became disabled. The press release announcing the study quotes Millan as follows:

“ ‘Not only are many executives at risk, but so are their families,’ said Melissa Millan, senior vice president, worksite insurance, MassMutual. ‘We commissioned this study to help employee benefits executives and benefits managers benchmark their disability insurance plans more effectively, and help lead organizations to fully informed recommendations and decisions.’ ”

On December 4, Simsbury Police Chief Peter Ingvertsen held a press conference to provide the press and public with updates on the case. He said friends, family and co-workers have been interviewed and that the public has come forward with information.

A reporter at the press conference indicated that she had spoken with sources and learned that Millan had not been robbed nor was it a sexual assault. She asked the police chief if he had other reasons to believe it was not a random crime. Police Chief Ingvertsen said it had not yet been determined if this was or was not a random crime.