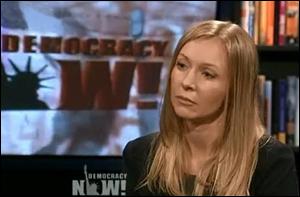 Alayne Fleischmann, Appearing on DemocracyNow! to Discuss Her Allegations Against JPMorgan Chase

Two years after attorney Alayne Fleischmann was downsized out of her job as a Transaction Manager at JPMorgan Chase, her boss, William Buell, was hauled before the Financial Crisis Inquiry Commission (FCIC) for interrogation on just how culpable the bank was in packaging and selling toxic mortgage backed securities.

Buell is the same man that Fleischmann exposed in a Rolling Stone feature article by Matt Taibbi last week as the recipient of her detailed, internal letter in early 2007, warning him that the mortgage pools her group was reviewing contained poor quality mortgage loans unfit for purchase or securitization. Despite the written warning, Fleischmann would later learn that JPMorgan, in a drive to boost market share and profits, went forward and purchased the pool, securitized many of the loans, then sold them to unsuspecting investors.

But when Buell was asked directly during his questioning on September 15, 2010 by a Federal investigator for the FCIC if anybody had asked him to apply the brakes and stop pushing out questionable mortgage loans, Buell did not mention the formal warning letter he received from Fleischmann.

Another opportunity arose during the interview to mention the letter from Fleischmann and Buell again fails to reveal it. An FCIC interviewer asks:

“During the period 2005, May 2005 until let’s say the end of 2007, was there a period of time where you, in your position, noted that there was somewhat of a deterioration in the quality of the loans that were being presented to you to purchase?”

Buell: “I think that what we saw happening at the time was there was a very competitive process to offer a wider and wider array of products to borrowers. And, it wasn’t the case that in that period of time, until the very end, in that period of time that anybody that really I was involved with was looking at the situation and saying, wow, we really think guidelines and origination standards were deteriorating…”

That statement stands in direct contradiction to what Fleischmann alleges she told Buell in early 2007 in a formal letter. It would be difficult to forget such a letter in a span of three years. According to Taibbi in the Rolling Stone article, the letter was “long” and nicknamed “The Howler” by JPMorgan lawyers.

The seriousness that JPMorgan assigned to the FCIC interview of Buell can be surmised from the fact that it was held not in offices of the Federal government but in the law office of the Wall Street mega law firm, Paul, Weiss, Rifkind, Wharton & Garrison – the firm best known for getting Citigroup out of fraud charges. In addition to a lawyer from Paul Weiss, there were two lawyers from the JPMorgan legal department present.

At the outset, Buell is told that those interviewing him are Federal employees and the interview will be governed by 18 U.S. Code 1001. The statute is explained to him to mean that it will be a crime to make a false statement in his testimony.

It’s clear from the outset that Buell is nervous and measuring his words. Most of his questions are coming from Tom Krebs of the FCIC. The moment of panic for the witness begins at 39:26 on the official audio recording of the interview with the mention of not the name of Alayne Fleischmann but a different woman, Vicki Beal. (See FCIC staff audiotape of interview with William Buell, JPMorgan Chase.)

Buell: “I do not know Vicki Beal.”

Krebs: “Are you familiar with the firm of Clayton Holdings?”

Buell: “I am familiar…[voice drops off into low, breathless tone]”

Krebs: “How are you familiar with Clayton Holdings?”

Buell: “They’re a vendor that we hired to assist in the due diligence process.”

Krebs then hands Buell some documents from Clayton Holdings. Buell says he doesn’t recognize the documents and will need a moment to review them. Four minutes of nervous paper rattling with no one speaking commences. There are sounds of loud scribbling on paper suggesting that perhaps lawyers who don’t want to be captured on the tape recording are conferring with their client via written messages.

If Alayne Fleischmann is JPMorgan’s $9 billion witness, Vicki Beal and other officials at Clayton Holdings are the $100 billion witnesses against a broad swath of Wall Street. Not only did Clayton review mortgage loan files prior to securitization for almost every major Wall Street firm as an outside due diligence vendor, it ranked the loans as Event 1, 2 and 3. An Event 3 meant the loan should be rejected as high risk. On top of that, Clayton kept its own internal reports showing the rate at which the individual Wall Street firms were asking it to change an Event 3 loan, that it believed should be rejected, to a 2W – meaning that the Wall Street firm wanted the loan “waived” in as an acceptable loan.

After turning over their internal documents to then State Attorney General Andrew Cuomo in early 2008 in exchange for immunity from prosecution in the state, Clayton handed over the same documents to the Financial Crisis Inquiry Commission.

One of the documents released by the FCIC, which may have been among those Buell and his lawyers were looking at during the four minutes of silence and nervous paper rattling on the tape, was a page that compared the number of Event 3 loans waived in by JPMorgan compared to Merrill Lynch and Lehman Brothers. JPMorgan had waived in 51 percent of the Event 3 versus Lehman’s 37 percent and Merrill’s 32 percent. (See Clayton Holdings’ Reject and Waiver Rates.)

At the end of the four minutes of silence, Buell asks where this document comes from. Krebs says it’s been subpoenaed from Clayton Holdings and they have this information on effectively every Wall Street firm – a message to the lawyers in the room that the Federal government can now reconstruct just who was pumping out the dirtiest securitization deals. These Clayton Holdings documents have been used in lawsuits against JPMorgan from coast to coast.

Next, Krebs asks Buell to explain the job description of his boss, William King. Buell says King was the Managing Director of the Securitized Products Group. King, it turns out, supervised both the traders who made the outsized profits for the firm on toxic securities, as well as Buell’s due diligence department. King has been named in multiple lawsuits against JPMorgan.

When the U.S. Justice Department announced its $13 billion settlement with JPMorgan on November 19, 2013, it had this to say about the findings it had made from the Clayton Holdings documents:

“As part of the settlement, JPMorgan admitted that the outside due diligence firms informed JPMorgan that numerous loans in the random samples of mortgage loans were in violation of underwriting guidelines and without compensating factors to justify the loans…Even though due diligence on the random samples indicated that the securitization pools likely contained many more loans with underwriting violations, JPMorgan did not identify and eliminate those loans from the pools. Thus, as JPMorgan admits in the settlement agreement, it did not disclose to investors that the RMBS [residential mortgage backed securities] included mortgage loans that did not comply with the applicable underwriting guidelines. The bank also admits in the settlement agreement that it did not disclose that it had an established practice of allowing loans into the pools for which the value of the collateral property determined in the due-diligence process differed from the originator’s appraisal by up to 15 percent, even when the loan-to-value ratio was as high as 100 percent.”

Out of the $13 billion settlement, $4 billion was going to settle claims made in court against JPMorgan by the Federal Housing Finance Agency (FHFA), the Federal receiver for Fannie Mae and Freddie Mac, the housing giants that collapsed during the Wall Street implosion of 2008. William King, Buell’s boss, had been a named defendant in that lawsuit. King was named because he had signed the Shelf Registration Statements for the securitizations of the mortgage backed securities.

Based on evidence it had obtained from Clayton Holdings and Vicki Beal, FHFA claimed in its court case that not only did JPMorgan “let poor loans pass into their securitizations in exchange for underwriting and securitization fees, they also took the fraud further, affirmatively seeking to profit from this knowledge.  Rather than rejecting these loans from the loan pool, as they should have, JPMorgan, Bear Stearns, and WaMu used the evidence of underwriting defects to negotiate lower prices for the loans and thus boost their own profits.  According to the September 2010 FCIC testimony of Clayton’s former president, D. Keith Johnson, the banks would use the exception reports to force a lower price for itself, and not to benefit investors at all.”

There was also an internal “Cheats & Tricks” memo that had originated inside JPMorgan that would have been devastating to it in front of a jury. FHFA explained it as follows in its lawsuit:

“JPMorgan abandoned its underwriting standards and condoned fraud by encouraging its employees to ignore and manipulate JPMorgan’s automated underwriting system, called ‘ZiPPY.’  ‘Chase mortgage memo pushes Cheats & Tricks, The Oregonian  (March 27, 2008).  CHF [Chase Home Finance, a unit of JPMorgan] went so far as to explicitly instruct loan originators to falsify loan information in order to elicit approval from the ZiPPY automated underwriting system for stated income loans of poor quality.  An internal memorandum circulated by CHF in its Portland, Oregon office titled ‘Cheats & Tricks’ gave originators tips on how to circumvent the underwriting system…The memorandum encouraged brokers to game the ZiPPY system because ‘[i]t’s super easy!  Give it a try!’ It provided the following ‘handy steps’ in order to gain approval for an otherwise rejected Stated Income/Stated Asset loan application:

“(1)  In the income section of your 1003, make sure you input all income in base income.  DO NOT break it down by overtime, commissions or bonus.

“(2)  NO GIFT FUNDS!  If your borrower is getting a gift, add it to a bank account along with the rest of the assets.  Be sure to remove any mention of gift funds on the rest of your 1003.

“(3)  If you do not get Stated/Stated, try resubmitting with slightly higher income.  Inch it up $500 to see if you can get the findings you want.  Do the same for assets.”

Fleischmann is up bright and early today to post on her newly created Twitter account, announcing that she will be on Bloomberg and the Keiser Report this morning. She’s also urging Americans to become engaged in this battle by contacting their elected representatives in Washington.

And there is one final, critical point buttressing the idea that the time is ripe to flood Congress with phone calls on this issue. If JPMorgan’s $13 billion civil settlement with Attorney General Eric Holder and the U.S. Justice Department was a tacit agreement to shut down the criminal investigation as well, somebody forgot to tell the Justice Department’s office for the Eastern District of California – the very office that previously took Fleischmann’s testimony and documents.

The 10Q quarterly report filed by JPMorgan with the SEC for the period ending September 30, 2014 (and filed just last Monday, November 3, 2014) included this notation:

“The Firm is responding to an ongoing investigation being conducted by the Criminal Division of the United States Attorney’s Office for the Eastern District of California relating to MBS [mortgage backed securities] offerings securitized and sold by the Firm and its subsidiaries.” The emphasis on the word criminal is ours.