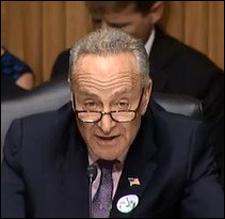 New York City has 8.4 million people living in its boroughs. But when it comes to defending those charged with financial crimes, it’s a very small, clubby world of people who are either related to each other or have worked together in the past. And this clubby group has one more thing in common: most of its members seem to be lavishing huge campaign contributions on U.S. Senator Charles (Chuck) Schumer of New York – a man who is in a position to recommend Federal Judge appointments and the Justice Department’s U.S. Attorney who will prosecute the financial crimes – or not.

These are the findings in a new on-line book, JPMadoff: The Unholy Alliance Between America’s Biggest Bank and America’s Biggest Crook, being offered free as a chapter a month by attorneys Helen Davis Chaitman and Lance Gotthoffer. (Chaitman is a nationally recognized litigator who was swindled by Madoff and is passionate about getting an unabridged recital of facts out to the public, including details about the extensive involvement in the fraud by the big Wall Street bank, JPMorgan Chase, and Madoff clients that the authors believe to have been co-conspirators.)

Chapter 3 is now up on the web site and delivers this nugget: “Senator Schumer was a frequent visitor to Madoff in his office in New York’s Lipstick Building.” This information came to Chaitman in 2009 from Madoff employees and is confirmed by a 2014 interview with Madoff himself by Politico’s MJ Lee, indicating that Schumer paid personal visits to Madoff  to collect campaign contributions.

In the March Politico article, Lee adds this: “Approached in a Senate hallway last week, Schumer seemed willing to talk to a reporter — until the subject of Madoff came up. ‘I’m not commenting,’ the New York Democrat said as he walked away. ‘I am not commenting.’ ”

The web of relationships unveiled in the book include the following:

The U.S. Attorney for the Southern District of New York, Preet Bharara, who agreed to a deferred prosecution agreement against JPMorgan Chase for their involvement in the Madoff fraud and who allowed the family of Madoff client Jeffry Picower to keep billions of dollars that very likely grew out of the fraud, was Senator Schumer’s former Chief Counsel and recommended for the prosecutor’s post in 2009 by Senator Schumer.

The lawyer who represented the Picower family and estate with the U.S. Attorney’s office, William Zabel of Schulte Roth & Zabel had also served on the Board of the Jeffry M. & Barbara Picower Foundation which was a major beneficiary of Madoff’s crimes, according to the Trustee of the Madoff victims’ fund, Irving Picard. While William Zabel was representing the Picower estate, his son, Richard Zabel, was the Chief of the Criminal Division of the U.S. Attorney’s office in the Southern District of New York, working under Preet Bharara. (Richard Zabel recused himself from the matter.) Richard Zabel has since received a promotion and is now the Deputy U.S. Attorney for the Southern District of New York.

Employees of Schulte Roth & Zabel have consistently been in the top ranks of donors to Senator Schumer, with cumulative contributions of $200,100 for all years, putting them in the league with Wall Street legal powerhouses like Sullivan and Cromwell’s donations to the Senator.

There is no question that Jeffry Picower and his family were the largest beneficiaries of the Madoff fraud; they admitted as much by returning the full amount that had been withdrawn from their accounts: $7.2 billion (with a “b”). The authors have this to say in that regard:

“Picower realized a net gain of $7.2 billion from his complicity with Madoff over a 25-year period. Although the Madoff Trustee has not revealed the information as to the precise dates on which Picower withdrew funds from Madoff, if we assume that the funds were drawn out evenly over 25 years, and we assume that Picower had simply invested his stolen money in U.S. Treasury Notes over a 25-year period, he would have tripled his money – giving him a profit from Madoff’s crimes of approximately $21 billion. Again, that’s assuming he did nothing with his money but invest in U.S. Treasury Notes.”

The authors have a point. A basic tenet of Investing 101 is that there is a time value to money. For the U.S. Attorney’s office and the Madoff trustee to have allowed the Picowers to keep the investment gains earned on the stolen funds is suspect, especially given the additional facts in the case.

In his original lawsuit against Picower, the Madoff trustee, Irving Picard, had alleged the following from the detailed records he had obtained from the Madoff offices and warehouse:

“Among other reasons, Defendants [Picower entities] knew or should have known that they were profiting from fraud because of the implausibly high rates of return that their accounts supposedly achieved…In several cases, Defendants’ purported annual rates of return were more than 100%, with some annual returns as high as 500% or even 950% per year…

“Picower and the other Defendants knew or should have known that fictitious and backdated trading activity was being reported in their accounts, and that their accounts reflected fictitious holdings.  For example, Decisions [a Picower business account] maintained several accounts with BLMIS [Bernard L. Madoff Investment Securities].  One of those accounts, ‘Decisions Inc.,’ was used by Picower and the other Defendants as the primary source of cash withdrawals from BLMIS.  The account reflected little trading activity and relatively few holdings, but Picower directed quarterly distributions from this account in the millions to hundreds of millions of dollars throughout the 1990s and 2000s. Indeed, as of the date of Madoff’s arrest, the account had a reported negative net cash balance of more than $6 billion. Most distribution requests were signed by Picower and faxed to BLMIS by Freilich, although some were signed by Freilich and in other cases Picower directed that any questions should be addressed to ‘April’ [Freilich].

“Even more brazenly, one account combined outrageous returns with backdating to create trades that ‘occurred’ before the account was even opened by BLMIS. On or about April 24, 2006, Decisions opened a sixth account with BLMIS (‘Decisions 6’) by wire transfer on April 18 of $125 million.  BLMIS promptly began ‘purchasing’ securities in the account, but it backdated the vast majority of these purported transactions to January 2006.  By the end of April, a scant 12 days later, the purported net equity value of the account was over $164 million, a gain of $39 million, or a return of more than 30% in less than two weeks of purported trading…

“On May 18, 2007, Freilich indicated the Foundation needed ‘$20 mil in Gains’ for January and February and ‘want[ed] 18% for year 07 appreciation,’ but that she had to check the numbers ‘with Jeff.’  On information and belief, ‘Jeff’ is Defendant Jeffry Picower.  Five days later, on May 23, Freilich told BLMIS that the numbers she had provided earlier were wrong, and the Foundation ‘needs only $12.3 mil [in gains] for’ January and February 2007. Accordingly, the Picower Foundation’s May 2007 statement reflected millions of dollars in securities transactions for the months of January and February 2007 that collectively resulted in a purported gain to the account of $12.6 million.  These transactions had not appeared on the January or February 2007 statements, nor on any prior monthly customer statements that had been generated before May 2007, nor were the corresponding equity positions or values reflected on those earlier statements…

“On or around December 29, 2005, April Freilich, acting on behalf of Picower, faxed to BLMIS a letter signed by Picower that directed BLMIS to ‘pick up long term capital gains in the accounts listed below before December 31, 2005’ across five Decisions accounts…Upon Picower’s instruction, BLMIS ‘sold’ Agilent Technologies (‘Agilent’) and Intel Corporation (‘Intel’)  across these accounts, realizing a long-term gain of approximately $46.3 million, a significant majority of the requested gain. According to the account statements generated by BLMIS for December 2005 – and forwarded to Picower and his agents – these trades purportedly settled around December 8 and 9, 2005, approximately 3 weeks before the relevant instruction was sent to BLMIS. Picower’s failure to question BLMIS’ apparent clairvoyance suggests that Picower knew that BLMIS was backdating trades.”

Less than a year and a half after Picard filed his lawsuit against Picower, the billionaire died of a heart attack while swimming in his Palm Beach pool. Freilich was never charged.

Zabel’s law firm, Schulte Roth & Zabel, bragged of the cool deal they had crafted for the Picowers as follows in their 2010 – 2011 Annual Report:

“It took a concerted effort among SRZ attorneys with diverse specialties to arrive at this historic result. The representation was led by partners from Individual Client Services and Litigation who were assisted by attorneys from Business Reorganization, Tax and Business Transactions. In announcing the settlement, Madoff trustee, Irving Picard, said, ‘When we filed suit against Mr. Picower and others in the spring of 2009, the records available led us to allege that Mr. Picower might have or should have known of Mr. Madoff’s fraud. With the benefit of additional records, I have determined that there is no basis to pursue the complaint against Mr. Picower, and we have arrived at a business solution instead.’ ”

In Wall Street’s New York, “business solutions” are so much tidier than justice.

On September 9 of this year, Nathan Vardi, writing for Forbes, reported that “Barbara Picower, the widow of the biggest beneficiary of the Bernard Madoff Ponzi scheme, has resumed her role as one of the nation’s top philanthropists, heading a new foundation with more than $2 billion in assets.”

The new entity is called the JPB Foundation. According to Vardi, April Freilich, who was listed to receive $13.5 million in Picower’s will, is the Treasurer of the new foundation. William Zabel is one of the Trustees.