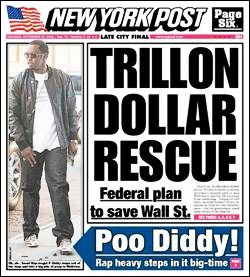 This month marks the six-year anniversary of the financial collapse of some of Wall Street’s most iconic names. As this New York Post cover of September 20, 2008 memorializes, rapper Sean Combs (P. Diddy) was stepping in dog excrement while the taxpayer was being dragged into something just as smelly – a government bank bailout that would grow to hundreds of billions in on-the-record cash infusions and $16 trillion in secret below-market-rate loans from the Fed.

The Senate Banking Committee is hauling all six regulators of Wall Street before it today to take the pulse on where reform has failed and where it’s working.  (The fact that Wall Street still needs six regulators is your quick answer that these mega banks remain too big, too complex, and still too dangerous.)

Daniel K. Tarullo, a Governor at the Federal Reserve, will attempt to reassure the Senate panel that they have things under control with testimony that the Fed will be imposing capital surcharges on the most Global Systemically Important Banks or GSIBs.

In his written testimony, Tarullo writes:

“An important remaining Federal Reserve initiative to improve GSIB resiliency is our forthcoming proposal to impose graduated common equity risk-based capital surcharges on U.S. GSIBs.  The proposal will be consistent with the standard in section 165 of the Dodd-Frank Act that capital requirements be progressively more stringent as the systemic importance of a firm increases…By further increasing the amount of the most loss-absorbing form of capital that is required to be held by firms that potentially pose the greatest risk to financial stability, we intend to improve the resiliency of these firms.  This measure might also create incentives for them to reduce their systemic footprint and risk profile.”

SEC Chair Mary Jo White will attempt to put the best possible light on all the Dodd-Frank reform legislation rules that have still not been finalized – more than four years after Congress passed the law. And she’ll accentuate just how much has been done considering the stingy budget with which Congress has given the SEC to work.

White notes in her written comments:

“In 2004, the SEC had 19 examiners per trillion dollars in investment adviser assets under management. Today, we have only 8.  Additional resources are vital to increase exam coverage over investment advisers and other key areas, and also to bolster our core investigative, litigation, and analytical enforcement functions.”

As is now routine, White salutes the markets she oversees, writing: “Our nation’s markets are the safest and most dynamic in the world…” Unfortunately, White is getting her information second hand. Those who have worked on Wall Street, or have spent years reporting on it, consider it “one vast dark pool,” or “rigged,” or “broken.”

Richard Cordray, Director of the Consumer Financial Protection Bureau (CFPB), an agency created under Dodd-Frank to protect consumers, will deliver a few rays of sunshine on the enforcement front, noting:

“To date, our enforcement actions amount to $4.7 billion in relief for roughly 15 million consumers who were harmed by illegal practices…Along with officials in 49 states, we took action against the nation’s largest nonbank mortgage loan servicer for misconduct at every stage of the mortgage servicing process [Ocwen Financial Corporation, and its subsidiary, Ocwen Loan Servicing]. A federal court consent order requires the company to provide $2 billion in principal reduction to underwater borrowers and to refund $125 million to nearly 185,000 borrowers who had already been foreclosed upon.

“We also partnered with 13 state attorneys general to obtain $92 million in debt relief for about 17,000 service members and others harmed by a company’s [Rome Finance] predatory lending scheme involving inflated prices for electronics where the actual annual percentage rate charged exceeded 100 percent more than six times the rate that was disclosed to service members and other consumers.”

The CFPB has also done outstanding work in getting students to write to it about their student loan experiences. Making those records public enabled Wall Street On Parade to report on the NYU student loan deal with Citigroup.

Read the full written testimony below:

Thomas J. Curry [view testimony]
Comptroller, Office of the Comptroller of the Currency