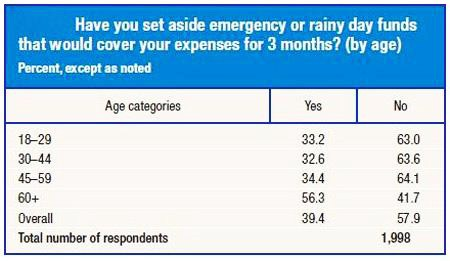 Any ideas that household balance sheets in the U.S. have been repaired since Wall Street took a wrecking ball to the nation’s economy in 2008 were dashed with the release of a study earlier this month by the Federal Reserve. As Federal Reserve Chair Janet Yellen ponders what will happen in the markets when the Fed starts to eventually raise interest rates, she has to also worry about what will happen to the cash-strapped consumer who is barely hanging on and has no emergency funds to meet a job loss or hike in credit card interest payments.

The Fed study was conducted in September 2013 by the Fed’s Division of Consumer and Community Affairs. Its stated aim was to “capture a snapshot of the financial and economic well-being of U.S. households, as well as to monitor their recovery from the recent recession and identify any risk to their financial stability.”

One question in the survey asked respondents  if they had set aside an emergency or rainy day fund that would cover three months of living expenses. (See a previous article from Wall Street On Parade on why a rainy day fund needs more than three months of expenses.) Shockingly, the respondents providing an affirmative “no” to the answer went up, instead of down, in the older groups, until age 60. Persons answering “no” in the 18 to 29 age group came in at 63 percent; 63.6 percent of the age category 30 to 44 said “no”; and 64.1 percent of those aged 45 to 59 said “no.” For respondents aged 60 and over, 41.7 percent reported having no rainy day fund. Among respondents of all ages, a majority, 57.9 percent, answered no to the question.

This is not the financial tanker that any Fed Chairman wants to contemplate navigating through future storm waters – particularly a Fed with a $4.3 trillion balance sheet which will restrain its ability to flood the markets again with liquidity in a major downturn – and zero historical perspective on what happens if you hike rates when a majority of Americans are financially struggling. (The survey found that only 48 percent of Americans could raise $400 in an emergency from their own checking, savings, or borrowing on a credit card which they would pay off when the next statement arrived.)

Those are seriously troubling figures but coincide with the survey’s data on retirement savings where 31 percent of respondents reported having no retirement savings or pension, including 19 percent of those aged 55 to 64 (who do not have adequate years of earning power left to build a sufficient level of retirement savings and are likely to have to continue working into their later years). This is a further indictment of the failed notion that workers have enough financial savvy or ability to save to build adequate retirement funds in a 401(k). Even those that contribute regularly to 401(k) plans are up against the dramatic shriveling of those funds from fees charged by Wall Street firms and mutual fund companies. 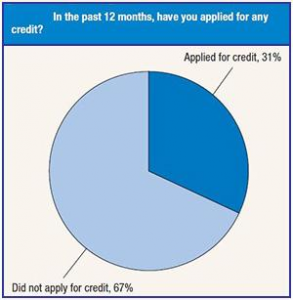 There was another data point that was puzzling. The number of people who had applied for some form of credit over the prior 12 months of the survey period, which ended in September 2013, came in at a very low 31 percent. This suggests one or more of the following: respondents did not want to reveal that their credit is so bad that they were turned down for a loan; or they have been turned down previously so they are not applying; or, more hopefully, some of the 67 percent who did not apply for credit have learned their lesson from the foreclosure crisis and are staying away from predatory banks.

The data collection for the survey began on September 17, 2013 and concluded on October 4, 2013. From a random sample of 6,912 individuals, surveys were completed by 4,134 respondents.