Senator Elizabeth Warren Versus Paul Krugman on Too Big to Fail 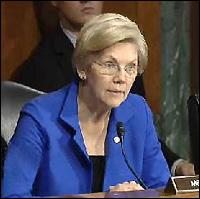 Two weeks ago, Paul Krugman used some expensive media real estate to write a propaganda piece on the unsupportable proposition that the Dodd-Frank financial reform legislation passed in 2010 is “a success story” and that its bank wind-down program known as Ordinary Liquidation Authority has put an end to “bailing out the bankers.”

Wall Street On Parade took Krugman to task over this fanciful ode to accomplishments by the President the day after his piece ran in the New York Times’ opinion pages and suggested he do proper research on this subject before opining in the future. That was the morning of August 5.

By late in the afternoon of August 5, Krugman had a reality smack-down on his Dodd-Frank success fairy tale by two Federal regulators. Every major media outlet was running with the news that eleven of the biggest banks in the country, including the mega Wall Street banks, had just had their wind-down plans (known as living wills) rejected by the Federal Reserve and FDIC for not being credible or rational. The eleven banks are: Bank of America, Bank of New York Mellon, Barclays, Citigroup, Credit Suisse, Deutsche Bank, Goldman Sachs, JPMorgan Chase, Morgan Stanley, State Street and UBS.

Yesterday, Krugman’s Dodd-Frank fantasy lost further credibility when Senator Elizabeth Warren released a letter that she and eleven of her Congressional colleagues had sent to the Federal Reserve, warning that one of its Dodd-Frank proposed rules “invites the same sort of backdoor bailout we witnessed five years ago.”

To refresh any forgetful minds at the Fed over its unprecedented hubris in connecting a giant feeding tube to Wall Street during the last financial crisis, the Senators and Congressional Reps wrote:

“These loans were another bailout in all but name. Of the nearly $9 trillion the Board provided through its largest facility – the Primary Dealer Credit Facility – over two-thirds went to just three institutions: Citigroup, Merrill Lynch, and Morgan Stanley. Those institutions and others had access to the Board’s credit facilities for an average of 22 months. And the interest rates the Board offered were typically very low – in many cases, under 1%.”

Think about this for a moment. Citigroup was insolvent during the crisis – as Federal insiders have now acknowledged in books and media interviews. In an efficient market system, Citigroup would not have been able to borrow at all, much less at a rate for a AAA-borrower of less than 1 percent. The Federal Reserve is forbidden from making loans to insolvent institutions – but it did it anyway.

Contrast the Fed’s largess to serial miscreants like Citigroup against homeowners at the time whose credit was flawed but they had a job and were still paying their bills. If these homeowners could have received funds at a borrowing rate of less than 1 percent, they could have paid off all of their high-interest rate debt, saved their homes from foreclosure, and started out on fresh footing.

Why does the U.S. financial infrastructure only play Fairy Godmother to criminally inclined banks?

Senator Warren and her colleagues clearly smell the possibility of another Citigroup-type situation occurring again. In the letter, they request that the Fed adopt a broader definition of insolvent “so that the Board could not use its emergency lending program to save an institution that is on the verge of bankruptcy.”

The twelve members of the Senate and House who sent this sternly worded letter to the Fed have solid cause for worry.  On July 31 of this year, Edward J. Kane, Professor of Finance at Boston College, testified before the Senate Banking Subcommittee on Financial Institutions and Consumer Protection that the stock of Bank of America and Citigroup “would have been declared worthless long ago if market participants were not convinced that authorities are afraid to force them to resolve their weaknesses.”

In his testimony, Kane called it “shameful” for government officials to suggest that bank bailouts were good deals for taxpayers, stating: “On balance, the bailouts transferred wealth and economic opportunity from ordinary taxpayers to much higher-income stakeholders in TBTF [too-big-to-fail] firms. Ordinary citizens understand that this is unfair and officials that deny the unfairness undermine confidence in the integrity of economic policymaking going forward.”

The letter from Senator Warren and her colleagues together with Professor Kane’s testimony are like a fresh breeze and the first glimpse of sunshine after being trapped in an underground tunnel of darkness for six years.

The letter ends with this: “If the Board’s emergency lending authority is left unchecked, it can once again be used to provide massive bailouts to large financial institutions without any congressional action.” (Read the full text of the letter here.)