Between Suspicious Deaths and Cy Vance Criminal Prosecutions, Technology Jobs On Wall Street Are Now Among the Most Dangerous in America 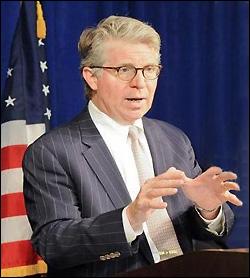 Wall Street On Parade has been reporting for the past six months on a series of tragic, sudden deaths of Information Technology workers at JPMorgan. Now coming to the fore are stories of relentless prosecutions of Wall Street’s IT workers by Manhattan District Attorney, Cyrus Vance. Bloomberg News reports today that Vance is engaged in at least four prosecutions of Wall Street workers over theft of computer code or other intellectual property.

Bestselling author, Michael Lewis, devoted a significant part of his latest book, Flash Boys, to the prosecution of Sergey Aleynikov over alleged stolen computer code. Aleynikov had been working for Goldman Sachs when he received an offer to move to a hedge fund and build a system from scratch. Aleynikov accepted the offer but agreed to stay at Goldman for six weeks to train his colleagues. (That does not seem like the action of a person on the run with stolen computer code.)

That was 2009. For the past five years, Aleynikov has been arrested and jailed by the Feds, had his conviction overturned by the Second Circuit Appeals Court, rearrested by the Manhattan District Attorney Cyrus Vance, and now faces more prosecution over the same set of facts: namely, that he took computer code that belonged to Goldman Sachs. Aleynikov is said to be among the best coders in the industry. He is increasingly being seen as the victim of malicious prosecution at the behest of the powerful Goldman Sachs.

According to the Lewis book, on the very same day that Kevin Marino, Aleynikov’s lawyer, gave his oral arguments to the Appeals Court, “the judges ordered Serge released, on the grounds that the laws he stood accused of breaking did not actually apply to his case.” He had been in prison for a year.

When the Second Circuit Appeals Court handed down its opinion of the case in December 2010, it found that Aleynikov had neither taken a tangible good from Goldman nor had he stolen a product involved in interstate commerce – noting that at oral argument the government “was unable to identify a single product that affects interstate commerce.”

But the hounds from hell were not finished with Aleynikov. Approximately six months after his vindication by the Second Circuit Appeals Court, the Manhattan District Attorney, Cyrus Vance, arrested Aleynikov, placed him in jail on essentially the same charges, and sought to have bail denied on the basis that he was a flight risk. Lewis notes in the book that the prosecutor put in charge of the case, Joanne Li, was actually the flight risk – Li soon fled the case, getting a job at Citigroup.

The ill repute that is now surrounding the Vance case is sending a message to close observers that this is more about harassing IT workers and delivering a cautionary warning to others than it is about punishing a real crime.

On Friday, June 20 of this year, New York State Judge Ronald A. Zweibel found that Aleynikov’s arrest at the hands of the Feds had been illegal. The Judge wrote that the FBI agent “did not have probable cause to arrest defendant, let alone search him or his home.” The Judge further noted that the “defendant’s Fourth Amendment rights were violated.”

The Judge also ruled that Aleynikov’s computer property seized by the FBI should have been returned to him after his case was overturned by the Federal Appeals Court. Instead, the Federal prosecutors turned the computers over to Vance’s office.

After Zweibel’s ruling, Aleynikov’s lawyer, Kevin Marino, released a statement saying that the Judge’s decision “represents a damning indictment of those assistant U.S. attorneys, assistant district attorneys and FBI agents who have now twice pursued an unlawful prosecution of an innocent man at the behest of Wall Street giant Goldman Sachs.” Marino added that Goldman “not only provoked but has been an active co-conspirator in the government’s case against Mr. Aleynikov.”

Is co-conspirator too strong a word? To comprehend the arrest and imprisonment of  IT workers on Wall Street, one has to have context.

For many decades, there was a saying on Wall Street that when the brokers left the building at 6 p.m., the firm’s assets walked out the door with them. That was owing to the fact that it was the brokers, not the firm, that had the close, long-term relationship with the clients and could simply move those accounts to a competitor.

Wall Street hated this and used the courts as their puppets to teach brokers a lesson. While brokers and other employees on Wall Street are forced to sign a mandatory arbitration agreement, contractually obligating them to bring any claims against their employer into Wall Street’s private justice system (viewed as a rigged Kangaroo Court by many), the Wall Street firms retained for themselves the right to sue their employees in a court of law.

The big powerhouses on Wall Street would routinely file a court request to grant a TRO (temporary restraining order) against the broker trying to move his clients and their assets to another firm. While clients have a right to hold their investment assets with any firm they want, overseen by any broker they want, the Wall Street firms would make the argument that the broker had taken records owned by the firm, for example, client account cards with phone numbers and addresses, etc.

In many cases, brokers were leaving for good cause: their manager was putting pressure on them to churn accounts to produce higher revenue; or sell in-house products over better performing outside products; or do various and sundry unethical acts. But the TRO had the effect of preventing the broker from contacting his clients for a long enough period of time for the firm to woo the clients to stay with promises of reduced commissions or other perks.

What has happened today on Wall Street is that the greatest source of profits is coming from high frequency trading using sophisticated algorithms and artificial intelligence which can deliver virtually riskless, profitable trading 24/7 by jumping in front of the slow moving order from public pensions, mutual funds and retail investors. As Senator Elizabeth Warren stated at a Senate hearing on June 18:

“In its recent IPO filing, the high frequency trading firm, Virtu, reported that it had been trading for 1,238 days and it had made money on 1,237 of those days…The question is that high frequency trading firms aren’t making money by taking on risks. They’re making money by charging a very small fee to investors. And the question is whether they’re charging that fee in return for providing a valuable service or they’re charging that fee by just skimming a little money off the top of every trade…”

Wall Street’s incestuous relationship with law enforcement in New York City has grown to epic proportions. It includes the joint operation of a surveillance center in Lower Manhattan and the ability for Wall Street firms to hire off duty NYPD officers with the power to arrest.

It’s time for a truly independent investigation of the prosecutorial hubris that has built up in New York City under the banner of “protecting” Wall Street. As Cy Vance scurries about prosecuting IT workers on Wall Street, the FBI, Justice Department, and New York State Attorney General are investigating Wall Street firms for potentially designing computer code to fleece investors across America.

It would certainly not be the first time that a New York City defender of the public interest used his office to audition for a multi-million dollar job on Wall Street.

According to Lewis, Aleynikov has started a memoir. One line from the memoir reads: “The prisons are filled by people who crossed the law, as well as by those who were incidentally and circumstantially picked and crushed by somebody else’s agenda.”