Internal Graph at CME Shows How the Futures Market is Rigged 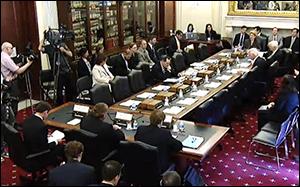 Senate Agriculture Committee Hearing on May 13, 2014 on High Frequency Trading in the Futures Market

Since Michael Lewis first uttered the immortal words on 60 Minutes on March 30 that “stock market’s rigged” through the willful collusion of exchanges, large broker dealers and high frequency traders, it has become clear that the public relations game plan of the regulators and self-regulators is to pray for a technology-challenged Congress and a gullible public.

J. Bradley Bennett, Executive Vice President of Enforcement at FINRA, the industry’s self regulator, suggested that high frequency trading was no different than buying a first class ticket on an airplane. (Wall Street On Parade suggested that this is only true if one has also hijacked the plane and robbed the passengers in coach.)

Next up was SEC Chair Mary Jo White who flatly told the House Financial Services Committee on April 29 that “the markets are not rigged” despite three books and dozens of research papers documenting the opposite conclusion. On Tuesday of this week, Terrence (Terry) Duffy, Executive Chairman and President of the CME Group, which operates the largest futures exchange in the world, appeared before the Senate Agriculture Committee to testify that his market was pristine and was delivering a “level playing field” to all comers. (Operating a level playing field is not negotiable for an exchange; under U.S. law, an exchange serves as a self-regulator and must police itself and its members to guarantee a level playing field for all.)

First Duffy testified that “Our market data is sent to everyone at once. While customers have several options in terms of how they can receive data from us, we do not restrict access.  Having multiple connectivity options makes our markets accessible to a broader array of participants.”

Then Duffy went on to explain co-location to the skeptical group of Senators, telling them:

“Another service that CME Group provides to the marketplace is colocation.  The criticism of colocation in some of the public coverage of this issue has failed to recognize that colocation actually equalizes access to the benefits of speed through proximity.  It used to be that the benefit of speed from proximity was available only to traders who could buy real estate near an exchange, or where he or she thought the server would be…Everyone in our facility connects with the same length wire, so there are no unequal location advantages.  This is one of the true benefits of our colocation services.”

Duffy is one of the top executives at a critical futures marketplace which allows farmers and corporations as well as traders to hedge their risk in everything from farm crops like corn to interest rates, foreign currency, stock indexes, and oil. Its integrity is, quite seriously, a matter of national security. The CME Group owns the Chicago Mercantile Exchange (CME), the largest futures exchange in the world,  as well as the Board of Trade of the City of Chicago (C-B-O-T), New York Mercantile Exchange  (NYMEX), and Commodity Exchange (COMEX).

The public is already well aware that some of the underlying products that trade on the exchanges of the CME Group are, or have been recently, rigged: like interest rates, and foreign currency exchange, and potentially metals and oil. But that’s not the exchanges’ fault – that’s a result of the serial collusion of too-big-to-jail global banks that both Congress and the U.S. Department of Justice have failed to tame.

The question before Duffy on Tuesday by a Senate panel that should have had the good sense to put him under oath, given the wealth of material currently in the public domain attesting to the broad rigging of financial markets, was if his exchanges are rigged.

When Duffy testified to a U.S. Senate panel that “customers have several options in terms of how they can receive data from us, we do not restrict access” it was, in the opinion of market veterans, a flat out falsehood. The CME restricts access based on the participant’s ability to pay $144,000 a year for a lease to locate their computer right next to the exchange’s computer, allowing that participant to receive market data faster than other participants.

Telling a U.S. Senate panel attempting to get at the truth that “Everyone in our facility connects with the same length wire, so there are no unequal location advantages” is, once again, a gross distortion of what is actually going on at the world’s largest futures exchange.

There was not one word in Duffy’s written or verbal testimony to explain to this Senate panel that the CME has given extreme preferential treatment based on exorbitant pay-to-play rules it has imposed on its market participants.

To have given forthright testimony to the Senate, Duffy should have introduced the CME’s co-location pricing plan available at this link. It shows not a two-tiered market but an eight-tiered market based on the participant’s ability to pay CME $144,000 a year for super-fast speed declining to $6,000 a year at the bottom rung of the speed chain. Each higher rung of the pricey chain is feeding on the slower traders on the lower, cheaper rungs.

We do not have to rely on just Michael Lewis or academic scholars to tell us what this access to fast or slow speed means in terms of manipulated markets. This handy video from a trading firm that has snagged some of CME’s choice co-location computer rack space (and is offering to share it for $299 a month) explains it all in exquisite detail:

Duffy was questioned by Senator Sherrod Brown about another problem at his exchange – high frequency traders getting ahead of other participants by receiving confirmations of their own trades which are not recorded on the CME’s data feed until later.

Senator Brown: “As we know the world of high speed trading time is measured in microseconds (millionths of a second) or milliseconds (thousandths of a second)…The Wall Street Journal highlighted ‘order latency’ when trade information is routed to the parties to a trade before they post to the rest of the market. This informational advantage, if you will, allows high speed trading firms to see which way prices are heading, as you know, and trade ahead of the rest of the market on a different futures exchange, exploiting arbitrage opportunities in mere milliseconds.

“Your testimony today says that CME’s market data quote is sent to everyone at once. On April 23, Mr. Duffy, you told Bloomberg that (quote) “latencies have been shrunk dramatically” but I’ve heard that they may remain in important contracts like the crude oil complex. Has CME addressed latencies across all futures contracts? Are these delays just shorter or are they gone completely?”

Duffy: All of our market data comes out of one pipe sir. And then the way you decide to acquire that is up to you. So there’s multiple ways to receive market data. So it does go out all at once. What you’re referring to, I believe, in the Wall Street Journal article that was written over a year and a half ago is where a participant would receive his confirmation of a trade but the market data did not hit the tape yet. So he knew he had the trade, he was the only one who knew he had the trade, the rest of the world didn’t know he had the trade yet. That was what the Wall Street Journal article cited. We have shrunk that latency dramatically about market data to market confirmation.”

Duffy goes on to say that there could still be a lag of a millisecond. The problem with this is that there are 1000 microseconds in 1 millisecond and, according to the Wall Street Journal article referenced in the testimony, “Firms can also capitalize on that early information by buying a related product on another exchange before other traders know of a market shift. For example, it takes about 200 microseconds for trades to get from CME’s Aurora, Ill., data center to the computers of Intercontinental Exchange Inc.”

If our Congress ever hopes to get at the facts and the truth about our rigged markets, and convey the information to the public in language it can understand, both the Senate and the House must hire a Special Counsel who is articulate, clear, and has a deep background in the securities and futures markets to conduct these hearings. The Senate appointed Ferdinand Pecora to do the job after the 1929 crash and ensuing Great Depression. Pecora issued subpoenas and demanded testimony under oath for two years. The American people deserve no less this time around.