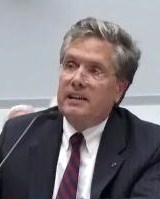 You know there is a lot more to the story when the top Federal regulator of Wall Street’s biggest banks turns to three foreign countries to figure out how to beef up examining these complex webs of darkness. And London (infamous now for its blinders as the biggest banks rigged Libor interest rates, foreign currency exchange and the metals market) can’t feel too good about being snubbed in the process.

It all started last year when the head of the Office of the Comptroller of the Currency (OCC), Thomas Curry, commissioned a peer review study by senior financial supervisors from Australia, Canada and Singapore. Why these three countries?

According to the study, “the selection criteria were countries with significant and mature financial markets, well-respected supervisory regimes, and large commercial banks that have been consistently rated among the safest in the world. While virtually all of the major financial sectors around the world were affected by the crisis, major banks in these three countries demonstrated strong resilience.” (That may just as likely be a function of a central government refusing to allow its  commercial banks to become global gaming casinos as it is an outcome of competent supervision.)

In addition to reviewing internal and external OCC reports, the group conducted on-site work at the OCC from October 28 to November 5, 2013, including meetings with OCC management and staff.  Interestingly, we learn that the group also met with “members of the board and management teams of two large national banks.” The banks go unnamed in the report. The group submitted their report to the OCC in December 2013 and the OCC revealed the initial steps it is taking in response yesterday.

For those who have followed the demoralization and marginalization of bank examiners at the Federal Reserve Bank of New York as a result of the organization’s atrocious treatment of bank examiner Carmen Segarra, or have followed our coverage of the job function of “relationship managers” at the New York Fed and Citibank, you won’t be surprised at one of the key findings of the peer review:

“First, teams assigned to large banks and some midsize banks may currently be located on the institution’s premises. While this presence in the bank may facilitate good communications with the bank it has the undesirable effect of reducing communications among OCC examiners assigned to other banks.

“Second, some staff below the EIC and LE level presently is assigned to the same institution for many years. Examiners may get stale and become too familiar with the mid-management of the institution, giving rise to perceptions of regulatory capture.”

The peer group recommended relocating “examiners who are resident in commercial banks to common OCC premises. While the ‘resident examiner program’ facilitates access to institution management and information systems, it should be continued on a much smaller scale.”

The OCC’s response, released yesterday, appears tepid at best considering that regulatory capture is now a foregone conclusion by most Americans who have not been in a coma for the past decade. The OCC says that in response to the recommendation, it “will reduce the number of examiners who are on site at individual banks over time.”

The peer group made numerous other well-reasoned recommendations to which the OCC has responded with some action or promises. (See related links below.)

The question, of course, is why the OCC needed to turn to three foreign countries to gain insight into how to prevent behemoth Wall Street banks from wreaking havoc on the planet again. Sister regulators to the OCC providing oversight of Wall Street banks include the Securities and Exchange Commission, the Federal Reserve, the FDIC, the Commodity Futures Trading Commission, and the Consumer Financial Protection Bureau. In terms of research, we have multiple Congressional Committees, the twelve individual Federal Reserve Banks, the Financial Stability Oversight Council, and the Office of Financial Research within the U.S. Treasury, not to mention hundreds of U.S.-based academics studying the structure of U.S. financial regulation.

Furthermore, it’s not like these three countries have anything remotely as complex and systemically intertwined as Wall Street’s global gaming casinos nesting inside FDIC insured banks. Asking Australia, Canada and Singapore to do a “peer” review banking study is like asking the local bakery to do a “peer” review of Enron’s books.

One suspects that Canada’s peek into U.S. banks involved in the Libor rigging matter; Singapore’s post-crisis discovery of continued wrongdoing by U.S. banks; and general suspicions in Australia that big banks in the U.S have not actually changed their jaded ways, might have had something to do with this request for outside opinion.