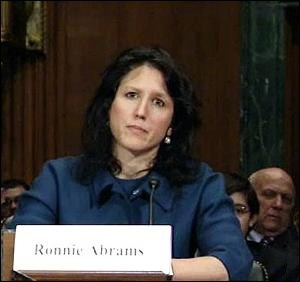 On October 10, 2013, bank examiner Carmen Segarra and her attorney, Linda Stengle of Boyertown, Pennsylvania, took on one of the mightiest and interconnected institutions on Wall Street: the Federal Reserve Bank of New York. They relied on the Federal court system, funded by the taxpayer, and a fair and impartial judge to level the playing field. Things got off to a promising start.

Segarra was a bank examiner at the Federal Reserve Bank of New York, a key regulator of Wall Street banks. She charged in her lawsuit that when she turned in a negative assessment of Goldman Sachs, she was bullied and intimidated by colleagues at the New York Fed to change her findings. When she refused, she was terminated from her job in retaliation and escorted from the Fed premises, according to her lawsuit.

The case was assigned to Judge Ronnie Abrams, an Obama appointee, the daughter of constitutional law expert, Floyd Abrams, and sister to Dan Abrams, the well known legal affairs commentator on television.

Segarra also had a powerful whistleblower protection law on her side, designed specifically to include a bank examiner such as herself working for a Federal agency overseeing banks. The law is known as the Federal Deposit Insurance Act and codified as 12 U.S.C. 1831j.  It was enacted to prevent the intimidation, discrimination or firing of employees involved in examining the safety and soundness of the U.S. financial system because they had found wrongdoing and reported it. A key section reads:

No Federal banking agency, Federal home loan bank, Federal reserve bank, or any person who is performing, directly or indirectly, any function or service on behalf of the Corporation may discharge or otherwise discriminate against any employee with respect to compensation, terms, conditions, or privileges of employment because the employee (or any person acting pursuant to the request of the employee) provided information to any such agency or bank or to the Attorney General regarding any possible violation of any law or regulation, gross mismanagement, a gross waste of funds, an abuse of authority, or a substantial and specific danger to public health or safety…”

Segarra and Stengle scored an early, big win. The Judge ruled against the New York Fed’s efforts to seal parts of Segarra’s complaint and supporting documents. Then came two bizarre claims from the New York Fed.

On February 4, 2014, three lawyers representing the New York Fed filed a reply memorandum in the Segarra matter: Thomas C. Baxter, Jr., General Counsel and Executive Vice President of the New York Fed along with David Gross and Thomas Noone. The memorandum asserted the following:

Under the Federal Deposit Insurance Act, “the term ‘depository institution’ means any bank or savings association.” Goldman Sachs not only owns a commercial bank, but according to the FDIC, it owns an “insured depository institution,” which is defined as “any bank or savings association the deposits of which are insured by the Corporation pursuant to this Act.”

At this direct link from the FDIC, we see that Goldman Sachs Bank USA is a direct unit of Goldman Sachs Group, Inc., the bank holding company. We also see that the commercial bank has been insured by the FDIC since November 28, 2008 and its regulator is the Federal Reserve Board. If you click on the “Financials” tab, we learn that it holds $64,289,000 in deposits and has locations in five states. Under the “History” tab, it changed its status to “commercial bank” on November 28, 2008.

The lawyers for the New York Fed continued to press this “not a depository institution” theme before the court, triggering a letter response from Segarra’s attorney, Linda Stengle, who wrote to the court as follows:

“Plaintiff continues to object to Defendants inserting their versions of facts into the discussion at this point in the proceeding, when the Judge has granted their request to stay discovery. For example, Defendants continue to say Goldman is not a depository institution when there has been no discovery and no stipulation regarding how or why Goldman came to be examined by the New York Federal Reserve Bank through Carmen Segarra. The Court has been abundantly considerate of Defendants’ wishes to stay discovery; for any discrepancy in facts, the Plaintiffs version of the facts must be given deference. Plaintiff continues to hope the Court will not find itself distracted by Defendants’ ‘red herrings.’”

The Fed’s denial that Goldman Sachs owned an FDIC insured depository institution was far more than just a “red herring” – it was a serious misrepresentation to the court. We must assume that lawyers at Goldman Sachs were following this case closely, and yet, for some reason, no one saw fit to dial up the New York Fed and point out their error. (While the Judge did not use this line of reasoning to dismiss Segarra’s case, it was mentioned in the decision and may have clouded the court’s understanding of the case.)

The law, in fact, covers misdeeds at Segarra’s own agency as well with this wording: “any depository institution or any such bank or agency.”

Next, the lawyers for the New York Fed told the court that the whistleblower law only covered laws or regulations and the issue raised by Segarra was governed by just an “advisory letter.”

The court, at this point, should have stepped back and reflected on the following: just five years ago, the U.S. taxpayer was called in to spew hundreds of billions of dollars into Wall Street’s teetering banks because of lax regulators seeking revolving door pay packages instead of conscientious oversight of toxic, over-leveraged gaming casinos. (As we pointed out in Part I of this article yesterday, the hubris at the New York Fed is a key part of this big picture.) The toll of that financial collapse lingers to this day in subpar economic growth and joblessness across America.

If this Federal Court allowed a regulator to twist a Federal whistleblower law inside out and upside down, it would be sending a chilling message to every other bank examiner in America: keep your mouth shut or you too can be fired with impunity.

On April 23 of this year, Judge Abrams threw out Segarra’s case, writing that “In sum, to state a claim under § 1831j, Plaintiff must plausibly allege that she ‘provided information’ about the violation of a ‘law or regulation.’  Plaintiff has alleged that she was terminated because she provided information about a possible violation of SR 08-08.  Therefore, the question before the Court is whether SR 08-08 is a ‘law or regulation.’ ”

But that is not what the law says. The law says Segarra was covered if she reported “any possible violation of any law or regulation, gross mismanagement, a gross waste of funds, an abuse of authority, or a substantial and specific danger to public health or safety.”

It is surely “gross mismanagement” for the New York Fed to fire a bank examiner for reporting a violation at Goldman Sachs; it is surely “an abuse of authority” for a Federal regulator to tolerate the bullying of a bank examiner to get her to change her review of a bank; it is certainly a “substantial and specific danger” to the public safety of our financial system to grant regulators impunity to fire whistleblowing bank examiners.

The unfairness of the proceeding was heightened when just 20 days before the Judge issued her written decision on April 23, she convened a phone conference with both sides to make a shocking announcement: “it had just come to her attention that her husband…was representing Goldman Sachs in an advisory capacity” according to the telephone conference transcript.

Judge Abrams’ husband is Greg Andres, a partner at law firm Davis Polk & Wardwell LLP who previously worked under Lanny Breuer in the Criminal Division of the U.S. Department of Justice. (Breuer announced his resignation one day after the PBS Frontline program reported that “when it came to Wall Street, there were no investigations going on. There were no subpoenas, no document reviews, no wiretaps.”) To date, not one key executive at any Wall Street bank that played a role in the financial collapse has been indicted.

Following that telephone conference, Segarra’s lawyer, Linda Stengle, filed a letter with the court asking for a more complete disclosure of the Judge’s husband’s relationship with Goldman Sachs. The New York Fed responded with its own letter, writing: “Plaintiff’s request for additional disclosures raises concerns about the appearance of a different sort of impropriety: forum shopping…Under these circumstances, the Court should deny Plaintiffs request for additional disclosures and proceed with the case.” (See FRBNY Response to Segarra Request for Filing Amended Complaint.)

Judge Abrams bought this line of reasoning in its entirety and accused Stengle of “judge-shopping” in her written decision tossing out the case — a bizarre allegation since Stengle had not asked the Judge to recuse herself.

Since the April 23 decision came down, Wall Street On Parade has researched this matter and found a great number of roads leading back to the law firm Davis Polk & Wardwell:

Judge Abrams worked at Davis Polk just prior to taking the bench;

U.S. Senator Kirsten Gillibrand, who recommended Abrams to Obama for the Judgeship and spoke on her behalf at her confirmation hearing, also previously worked at Davis Polk;

Davis Polk was the second largest contributor to Gillibrand’s 2012 Senate race, according to the Center for Responsive Politics, with its lawyers, employees and/or PACS contributing $333,100;

One of the lawyers representing the New York Fed in the Segarra matter, Thomas Noone, previously worked at Davis Polk and his employment there overlapped with that of Judge Abrams;

Davis Polk was a registered lobbyist for Wall Street’s trade association, SIFMA, from at least 2009 through 2013, collecting over $400,000 in lobby fees;

Canon 2A of the Code of Conduct for U.S. Judges mandates that:. “An appearance of impropriety occurs when reasonable minds, with knowledge of all the relevant circumstances disclosed by a reasonable inquiry, would conclude that the judge’s honesty, integrity, impartiality, temperament, or fitness to serve as a judge is impaired. Public confidence in the judiciary is eroded by irresponsible or improper conduct by judges. A judge must avoid all impropriety and appearance of impropriety. This prohibition applies to both professional and personal conduct. A judge must expect to be the subject of constant public scrutiny and accept freely and willingly restrictions that might be viewed as burdensome by the ordinary citizen.”

By refusing to provide answers to lawyer Stengle’s “reasonable inquiry” as to the history of her husband’s legal retainer from Goldman Sachs while simultaneously adopting the tortured reasoning of the New York Feds’ lawyers, an appearance of impropriety is clearly raised in the mind of the public.

Davis Polk is advising affiliates of the Goldman Sachs Merchant Banking Division in connection with the consortium acquisition with affiliates of The Blackstone Group L.P. of  Ipreo Holdings LLC from affiliates of Kohlberg Kravis Roberts & Co. L.P.

Davis Polk is advising Goldman Sachs’s merchant banking division and Vestar Capital Partners in connection with the acquisition of Hearthside Food Solutions LLC from Wind Point Partners. Financial terms of the transaction, which is expected to close in the second quarter of 2014, were not disclosed.

Davis Polk is advising an affiliate of Goldman, Sachs & Co. in connection with its $820 million acquisition of Ebix, Inc.

Davis Polk advised J.P. Morgan Securities LLC and Goldman, Sachs & Co. as initial purchasers in a Rule 144A offering by Accuray Incorporated of $100 million aggregate principal amount of its 3.50% convertible senior notes due 2018.

Davis Polk advised Goldman, Sachs & Co. and Barclays Capital Inc., as representatives of the underwriters, in connection with the SEC-registered offering of 23 million shares of common stock of MRC Global Inc. sold by PVF Holdings LLC, an entity controlled by funds affiliated with Goldman, Sachs & Co.

Davis Polk advised affiliates of GS Capital Partners, the private equity arm of Goldman Sachs, and Advent International on the $3 billion acquisition of TransUnion, a provider of information management and risk management solutions, from Madison Dearborn Partners and the Pritzker family business interests.