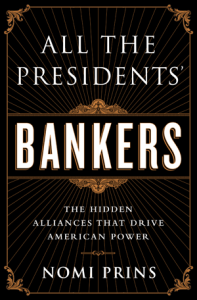 As far as we can tell from his online bio, George Melloan has never worked a day inside a Wall Street firm – at least not in the past half century since that time has been spent writing or editing for the Wall Street Journal. But that small detail does not in any way inhibit Melloan from telling those of us who had long careers inside the belly of the beast how we should revise our thinking about what we saw and heard with our own eyes and ears.

Nomi Prins has just come under the sharp pen of Melloan in a  Wall Street Journal review of her new book, “All the Presidents’ Bankers: The Hidden Alliances that Drive American Power.” As we have previously written, this book is so timely and important to the national discourse that even Melloan has a tough time hating it, writing that Prins “spins an enormous amount of research into a coherent, readable narrative. Even her frequent kvetches about the lifestyles of rich and famous bankers are entertaining.”

But then there’s that word “spins” in the above sentence. That’s what Melloan has been forced to convince himself of — that we Wall Street expats are spinning our facts and distorting his outsider’s narrative.

Melloan, who characterizes everyone who does not see things his way as a “populist,” says that Prins adheres to “populist tradition” and treats history “as a long-running conspiracy of powerful money lenders against ordinary folks like herself.”

Prins, like any ethical reporter, goes where her facts lead (and she backs up those facts with 69 pages of footnotes). If Prins found “a long-running conspiracy of powerful money lenders” it’s because every serious Senate or House investigation in the past century has found a Wall Street conspiracy.

Transcripts of the Congressional hearings of 1912 and 1913, when Arsene Pujo of the House Banking and Currency Committee investigated the “money trust,” found that a small group of Wall Street bankers had conspired to control many U.S. industries through interlocking directorates and other devious means.

The Pecora Senate hearings from 1932 to 1934, where counsel Ferdinand Pecora documented so many Wall Street conspiracies against the public interest that it outraged the entire nation, led to the critically important passage of the Glass-Steagall Act, separating insured depository banks from the speculative casinos on Wall Street. The repeal of that legislation in 1999, in the minds of many scholars who have carefully studied the issue, led to the financial collapse in 2008.

Today, there is overwhelming proof that Wall Street banks have been colluding with foreign global banks to rig everything from the Libor interest rate to physical commodity prices to foreign currency exchange. Call it a cartel or collusion or a conspiracy – the public is still the loser.

Melloan tries to breathe some life into that old failed notion that it was government-sponsored enterprises that caused the 2008 crash, not the heroic souls in the corner offices of Wall Street engaged in doing God’s work. He writes: “Mysteriously, Ms. Prins has almost nothing to say about Fannie and Freddie, even though they were the most political of banks and played the central role in creating the toxic securities that caused the 2008 market crash.” (The word “mysteriously” now combines with “spins” to subliminally shift the conspiracy to the doorstep of author Prins and away from the doorstep of Wall Street.)

It is well documented fact that Fannie and Freddie did not play “the central role” in the crash of 2008. The seminal work on the crash, the 662-page report from the Financial Crisis Inquiry Commission explained:

“The Commission also probed the performance of the loans purchased or guaranteed by Fannie and Freddie. While they generated substantial losses, delinquency rates for GSE [government-sponsored enterprise] loans were substantially lower than loans securitized by other financial firms. For example, data compiled by the Commission for a subset of borrowers with similar credit scores—scores below 660—show that by the end of 2008, GSE mortgages were far less likely to be seriously delinquent than were non-GSE securitized mortgages: 6.2% versus 28.3%.”

The report further notes that “By 2005 and 2006, Wall Street was securitizing one-third more loans than Fannie and Freddie. In just two years, private-label mortgage-backed securities had grown more than 30%, reaching $1.15 trillion in 2006; 71% were subprime or Alt-A.” By 2006, Fannie Mae and Freddie Mac’s market share had shrank to 37 percent.

And up pops yet another well documented conspiracy from a man on the inside. According to the report, Richard Bowen was a veteran banker in the consumer lending group at Citigroup – the Wall Street bank that received the largest bailout assistance from the government. According to the report, Bowen “would go on to oversee loan quality for over $90 billion a year of mortgages underwritten and purchased by CitiFinancial. These mortgages were sold to Fannie Mae, Freddie Mac, and others. In June 2006, Bowen discovered that as much as 60 % of the loans that Citi was buying were defective. They did not meet Citigroup’s loan guidelines and thus endangered the company… Bowen told the Commission that he tried to alert top managers at the firm by ‘email, weekly reports, committee presentations, and discussions’; but though they expressed concern, it ‘never translated into any action.’ ”

Back in August, Melloan was tilting at windmills again with a rant in the Wall Street Journal about overly zealous regulators who are  “encouraged by the Obama administration” to blame the nation’s economic ills “on the rich, Wall Street, moneybags bankers, deal makers like Mitt Romney or almost anyone else who still wears a suit to work.”

“Have bankers all gone rogue? Populists would have you think so, and apparently a sizable majority of Americans hold that view as well, judging from opinion polls. But this is not plausible. Bankers are more likely to exercise extreme discretion in an era when they are being constantly reviled by leftist politicians, writers and placard-carriers in the streets.”

“Extreme discretion”? Does Melloan never read the investigative reporting in the very newspaper in which he writes his opinion pieces? Just two years ago JPMorgan was caught red-handed gambling with hundreds of billions of bank deposits in exotic derivatives in London and losing at least $6.2 billion of those deposits on soured bets. For the first time in history, a major Wall Street bank (JPMorgan again) has been charged with two felony counts for aiding and abetting the Madoff fraud and received a deferred prosecution agreement.

Money laundering charges are swirling again – for the umpteenth time – around Citigroup. Criminal investigations are underway for a bank cartel rigging foreign exchange rates. And Michael Lewis has just published an insider’s account in his book, “Flash Boys,” featured on 60 Minutes two weeks ago, documenting how today’s stock market is outrageously rigged against the little guy.

There’s really only one conspiracy that Wall Street didn’t adequately perfect. It let some of us depart the corrupted corridors of power without signing non-disparagement contracts. But rest assured, it is rapidly trying to plug the hole in that dike.