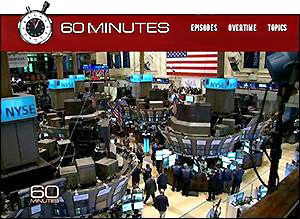 Two of the chief culprits of aiding and abetting high frequency traders, the New York Stock Exchange and the Nasdaq stock exchange, failed to come under scrutiny in the much heralded 60 Minutes broadcast on how the stock market is rigged.

This past Sunday night, 60 Minutes’ Steve Kroft sat down with noted author Michael Lewis to discuss his upcoming book, “Flash Boys,” and its titillating revelations about how high frequency traders are fleecing the little guy.

Kroft then asks Lewis to state just who it is that’s rigging the market. (This is where you need to pay close attention.) Lewis responds that it’s a “combination of these stock exchanges, the big Wall Street banks and high-frequency traders.” We never hear a word more about “the big Wall Street banks” and no hint anywhere in the program that the New York Stock Exchange and Nasdaq are involved.

60 Minutes pulls a very subtle bait and switch that most likely went unnoticed by the majority of viewers. In something akin to its own “Flash Boys” maneuver, it flashes a photo of the floor of the New York Stock Exchange as Kroft says to the public that: “Michael Lewis is not talking about the stock market that you see on television every day. That ceased to be the center of U.S. financial activity years ago, and exists today mostly as a photo op.”

That statement stands in stark contrast to the harsh reality that the New York Stock Exchange is one of the key facilitators of high frequency trading and making big bucks at it.

The Securities and Exchange Commission knows full well this is going on. Just this past December 24, the SEC filed this rule change in the Federal Register, announcing that the New York Stock Exchange was changing its pricing for some of its co-location services and computer cabinets for outside users. Like some kind of a half-off sale at Macy’s, the NYSE says it will offer: “a one-time Cabinet Upgrade fee of $9,200 when a User requests additional power allocation for its dedicated cabinet such that the Exchange must upgrade the dedicated cabinet’s capacity. A Cabinet Upgrade would be required when power allocation demands exceed 11 kWs. However, in order to incentivize Users to upgrade their dedicated cabinets, the Exchange proposes that the Cabinet Upgrade fee would be $4,600 for a User that submits a written order for a Cabinet Upgrade by January 31, 2014…”

The Federal Register notice also shines light on some pricing comparisons between what the NYSE is offering high frequency traders versus the Nasdaq stock market, writing: “The Exchange also believes that the Cabinet Upgrade fee is reasonable because it would function similar to the NASDAQ charges for comparable services. In particular, NASDAQ charges a premium initial installation fee of $7,000 for a ‘Super High Density Cabinet’ (between 10 kWs and 17.3 kWs) compared to $3,500 for other types of cabinets with less power.The Exchange charges only one flat rate for its initial cabinet fees ($5,000), regardless of the amount of power allocation.”

Congress is equally aware of what is going on. As far back as October 28, 2009, the U.S. Senate Banking committee took testimony from Larry Leibowitz, head of technology at the NYSE on the fact that it was offering co-location to outside trading firms. Neither the Flash Crash of 2010 or confidence-busting trading “glitches” since then have roused Congress and the SEC from their slumber.

Another opportunity emerges in the 60 Minutes broadcast for Kroft to call out the New York Stock Exchange or Nasdaq for their practices. As Kroft explains how this young former trader from the Royal Bank of Canada, Brad Katsuyama, figured out how high frequency traders were gaming the market and made appointments with institutional investors to share his insights, Kroft says “and some of the most famous names in the American stock market heard the pitch.” At this exact moment a photo of the exterior of the New York Stock Exchange flashes across the screen, giving the impression that the NYSE is some poor, naïve victim of a cartel of high frequency traders.

What is also preposterous about this 60 Minutes segment is that it deals exclusively with gaming the system through miles of fiber optic cable. That is so yesterday, according to the Futures Industry magazine. On January 24 of last year, the publication wrote that “High frequency traders can use wireless to connect to data sources or exchanges about 1.5 times faster than through fiber optics, enabling them to quote prices at tighter bid-ask spreads than rivals or execute trades more quickly than other firms. Such are the potential competitive advantages, however, that many projects are pursued behind a veil of silence.”

The article noted that San Diego-based NexxCom Wireless was building a millimeter wave network between New York, London and Frankfurt and considering connections to Zurich and Milan with the potential to add Stockholm and Moscow.

Within less than 24 hours of the big splash made by the 60 Minutes broadcast, the Wall Street Journal reported that the FBI was all over the problem and had been for a year. The question, of course, is – will anyone ever acknowledge the key role being played by the New York Stock Exchange and Nasdaq.