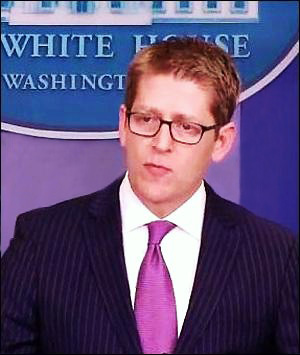 There’s a few Golden Rules that most Wall Street traders intuitively know never to cross: “Don’t fight the Fed,” “Cut your losses short and let your profits run,” “Never pick a fight with people who buy ink by the barrel,” and the one coined just last week: “Don’t bet against the folks with a military budget larger than the next ten biggest spenders combined.”

Of course, traders have egos and can sometimes forget the basics. The London Whale traders at JPMorgan elected not to cut their losses short and let them run to $6.2 billion, which led to press ink by the barrel, multiple Congressional hearings, indictments of traders, a $920 million settlement by JPMorgan and the trials have yet to start.

Now, once again, it seems that common sense has escaped the Masters of the Universe on Wall Street. Last Tuesday, Jay Carney, the Press Secretary of the Commander in Chief of the United States, told an assembly of reporters that he would not recommend investing in Russian equities right now, unless they were going to short them. Exactly one week later, Morgan Stanley, which boasts of  “$1.7 trillion in client assets, nearly 17,000 Financial Advisors and 740 locations,” reinstated its “Buy” rating on Russian equities.

Carney was responding to a question from a reporter about the fact that the Russian stock market had seen a bounce over the past few days. Carney responded:

“I think it’s down for the year, and I think the ruble has lost its value, and I think that the long-term effect of actions taken by the Russian government in clear violation of the United Nations charter, in clear violation of its treaty commitments, that are destabilizing — and illegal — will have an impact on their economy all by themselves. They will also incur costs because of the sanctions that we and the EU have imposed, and there will be more actions taken under the authorities that exist with the two executive orders that the president has signed. So I wouldn’t — I wouldn’t, if I were you, invest in Russian equities right now, I think the… unless you’re going short.”

It’s pretty much unprecedented for White House Press Secretaries to gratuitously dole out stock advice and likely violates a whole raft of securities laws to recommend the dangerous idea of shorting stock to a room full of strangers, some of whom may be late on their mortgage payment — especially when you don’t even hold a securities license. But Carney did have this knowledge backing up his position: according to the Office of Management and Budget, in 2012, the U.S. spent $682 billion on its defense budget; the next ten largest spenders combined spent $652 billion. Those countries were, in order of spending, China, Russia, U.K., Japan, France, Saudi Arabia, India, Germany, Italy and Brazil.

What could possibly account for Morgan Stanley taking such a radical position against the world’s only super power? According to Morgan Stanley’s web site, since 1994 the company has been “building relationships and expanding its product offerings in Russia. Morgan Stanley did not leave Russia after the 1998 financial crisis, and its uninterrupted presence has fostered trust and credibility with key governmental and corporate decision makers.”

In addition, says the company, it has recently established “a local trading platform and opened a Russian subsidiary bank in October 2005 allowing it to provide a full suite of financial services to its clients in Russia” and it has “managed most of the highest profile and most successful transactions in equity, mergers and acquisitions and debt in the Russian market.”

Perhaps unbeknownst to Press Secretary Carney, when one recommends shorting Russian equities, one may be imperiling a chunk of the U.S. stock market as a goodly number of Russian ETFs (Exchange Traded Funds) and outright Russian equities have been afforded entrance to our stock markets by our own Federal regulators.

The Market Vectors Russia ETF (symbol RSX), according to a Bloomberg chart, is an exchange-traded fund incorporated in the U.S. “The Fund seeks investment results that correspond to the price and yield of the Market Vectors TR Index, which tracks publicly traded companies that are domiciled in Russia.” As of yesterday’s close, RSX is down 9.55 percent in one month; 19.31 percent in three months; and 20.26 percent year-to-date. The shares have a market cap of $1.2 billion. That’s not chump change.

Then there’s the much smaller Direxion Daily Russia Bull 3x Shares (symbol RUSL), another ETF traded in the U.S. that tracks Russian shares. According to its Bloomberg chart, it has a market cap of a measly $60 million with 300 percent leverage. It’s down 51.69 percent in 3 months and 53.29 percent year to date.

There are also two big Russian telecoms trading here: Mobile Telesystems (symbol MBT) and VimpelCom (symbol VIP), with market caps of $17.4 billion and $15.1 billion, respectively, according to yesterday’s charts. Those price charts are nothing to write home about either.

If Carney’s advice turns out to be superior to Morgan Stanley’s, he may become the new rage on the cocktail circuit. Images of those old commercials from the 70s and 80s come to mind where a loud, glitzy party turns abruptly silent, with necks craning to hear a young stock tout from E.F. Hutton whispering a timely recommendation. Maybe a slot on CNBC’s “Fast Money” is even in the cards for Carney.