Have the Mega Banks Put the U.S. on Course for Another Crash? The Answer May Reside in Nomi Prins’ New Book 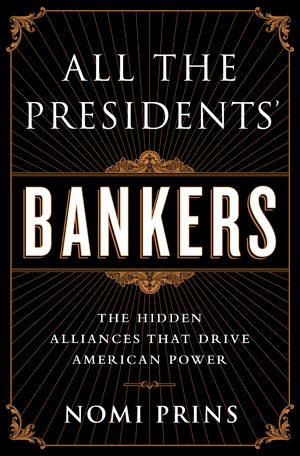 “All the Presidents’ Bankers: The Hidden Alliances that Drive American Power” by former Wall Street veteran, Nomi Prins, is a seminal addition to the history of continuity government between the White House and Wall Street from the days of Teddy Roosevelt and the Panic of 1907 right up through the Panic of 2008 and the Presidency of Barack Obama. (Don’t be intimidated by the 69 pages of footnotes; while meticulously researched, this is a captivating read for anyone seeking clarity on why Wall Street can collapse, get bailed out by the taxpayer, cause a Great Recession and still call the shots in Washington.)

The hefty hardcover deserves instant classic status for two reasons: like no other tome before, it explains through original archival material why the mega Wall Street banks are coddled by Washington and have been allowed to survive a century of public looting – because they are considered an essential financial component of the U.S. war arsenal.

The book also brings into crisp perspective the history of mega banks like JPMorgan Chase and Citigroup, their variously esteemed and despised titans of yesteryear, and why the country is reliving the mistakes of 1929 today.

Prins makes us all insiders as we read the private notes from Presidents scribbled to the historic Wall Street figures of their day. There is enlightening detail provided of the lead up to the 1929 stock market crash and the Great Depression. The foundation was laid, brick by brick, stone by stone, in a manner so identical to the lead up to the 2008 Wall Street crash that it gives one pause as to whether we have yet seen the worst of the aftermath.

The early warning signs were there, just as they were in 2007. Prins writes: “…home prices had softened in 1926, car sales dropped in 1927, and construction would level off in 1928. Inequality had increased dramatically, threatening economic stability. The whole system was buckling.”

And, of course, there was a bubble, over-leverage and Fed involvement. Prins explains: “Even before the bubble of the mid-1920s, there existed signs of trouble brewing in the land of plentiful credit extensions. In November 1923, the Federal Reserve began increasing its holdings in government securities (such as Treasury bonds) by a factor of six, from $73 million to $477 million, in what could be considered the first instance of ‘quantitative easing.’ This keeps rates low, not by setting them explicitly but by forcing the price of bonds up, which has the net effect of driving rates down.”

Prins points out that the “prosperity” of the late 1920s was coming from two sources. “First, as with all banks, money came from deposits – the bigger and more spread out the bank, the more channels for receiving new deposits.”

The other source, says Prins, was the Fed, “which kept rates relatively low on loans to banks during the speculative period and required little in the way of reserves, or collateral, to be set aside for stormy days.”

The massive issuance of troubled foreign bonds of that era is comparable to the Initial Public Offerings (IPOs) of Chinese and Russian companies that trade on U.S. stock markets today – companies the investing public know very little about in terms of the quality of their purported earnings.

Today, we read that most members of the U.S. House of Representatives (the so-called “People’s House”) are millionaires. Prins reminds us that when Herbert Hoover was elected President in 1928 as the “first millionaire to reach the White House,” he promptly filled his cabinet with fellow millionaires. (Millionaires filled six of his top ten posts.) The Nation magazine wrote at the time that Andrew Mellon, Hoover’s Treasury Secretary, was “one of the four richest men on this continent,” and Hoover kept him on from the Harding and Coolidge administrations, where he had served consecutive posts as U.S. Treasury Secretary.

The Nation said of Mellon: “During eight years he has so administered that office that $3.5 million in refunds, credits and abatements of income taxes has gone to wealthy individuals and corporations.” Mellon’s own Aluminum Company of America had escaped prosecution and received large refunds of taxes.

Today, we have a U.S. Treasury Secretary, Jack Lew, who was Chief Operating Officer of the unit of Citigroup that collapsed the bank and who received a $940,000 bonus from taxpayers’ bailout funds on his way out the door.

The similarity of today’s JPMorgan Chase taking over Bear Stearns and Washington Mutual during the Wall Street crisis and merging with Bank One in 2004, concentrating risk in opaque mega institutions also resonates with 1929. Prins writes: “By the fall of 1929 Chase had acquired six major New York banks, making it the second largest private bank in the world, next to Mitchell’s National City.” Mitchell’s National City is today’s Citigroup, parent of Citibank.

And Mitchell’s compensation was almost as obscene as his contemporary counterpart at Citigroup – Sanford (Sandy) Weill. “In 1928 and 1929,” writes Prins “Mitchell earned $1.2 million in total compensation, two hundred times the average American’s salary of $6,000.” Prins notes that Weill received some of the largest paydays in corporate history, including $220.2 million in 1997 by exercising stock options on top of $49.9 million in salary, bonus, restricted stock and options.

Mitchell was also a member of the Board of Directors of the New York Fed of his era. (Weill served on its Board from 2001 to 2006 as did JPMorgan Chase’s current Chairman and CEO, Jamie Dimon, from 2007 through 2012. Today’s dangers on Wall Street are exponentially heightened by the deeply conflicted Federal Reserve’s expanded role in supervising the opaque mega banks.)

Prins reminds us poignantly where the hubris can end. From a low of 199 on November 13, 1929, the stock market staged a 50 percent increase by April 17, 1930 before setting a new low of 33.98 on July 8, 1932. (The stock market would lose 90 percent of its value from peak to trough and not regain the high set in 1929 until a quarter of a century later.) Prins writes of the bubble years leading to the crash: “The money that was being funneled into the market to fuel financial speculation (rather than productive or social capitalism) provided the illusion of stability and prosperity, but it was not the kind of long-term capital upon which true economic growth could be sustained.”

The Fed and the bankers have created the exact illusion today: a stock market setting new highs on the zero-bound range of interest rates enforced by the Federal Reserve and highly leveraged stock speculation enforced by the bankers as the economy stagnates and long-term unemployment grows.

The headlines we printed just this past Friday at Wall Street On Parade on the growing deflationary trends in Europe should send a chill through every student of  financial history and send people scrambling for this book.

On May Day 1930, Prins ominously reminds us that President Hoover declared “We have now passed the worst and with continued unity of effort we shall rapidly recover.” Over the next two years, the economy and Wall Street were crushed.

Last year’s buoyant stock market may well be setting up the country for a repeat of the 1934 to 1936 faux recovery. As Prins explains: “Beginning in 1934 the financiers used the more stable banking system that had been engineered by the New Deal as a platform upon which to drive up the volume of stock speculation, and with it stock prices. The confidence this exuded and the media attention paid to it combined with New Deal stimulus to make the country appear to be exiting the Depression. This rise proved unsustainable and the market and the overall economy would dip again in 1937 and 1938, until it became more substantively elevated by war financing efforts and related employment opportunities for those not in combat overseas.”

Prins correctly lays the chipping away of the Glass-Steagall Act, the depression-era law which barred banks holding insured deposits from merging with high-risk-taking Wall Street firms, at the feet of the Federal Reserve Board of Governors. It started in the 80s and was escalated in the 90s. Prins notes that before Christmas 1996, the Fed passed a rule to become effective in March 1997 permitting nonbank subsidiaries of bank holding companies “to own investment bank affiliates with up to 25 percent of their business in securities underwriting (an increase from the prevailing 10 percent).”

Prins goes on: “In September 1997, the Fed announced it would eliminate more restrictions ‘to the prudential limits or firewalls’ that applied to bank holding companies engaged in securities underwriting and dealing activities, effective October 27, 1997. Now, banks could not only issue corporate bond securities, they could also buy entire securities firms.”

The end game of this, says Prins, was that it “stoked the market” in a manner “not unlike the one that prevailed during the ‘money trusts’ era at the turn of the twentieth century, when the Morgan group of financiers, by virtue of their joint position atop various firms, could buy securities from one of their firms concocted by another, providing the illusion of heightened demand, which, in turn enticed more external investors.” Pump and dump, in other words.

The Glass-Steagall Act was fully repealed in 1999 with the passage of the Gramm-Leach-Bliley Act – in no small part as a result of the actions of Weill and Dimon and the Clinton administration.

Prins comments that at times in the Nation’s history, bankers have demonstrated some social responsibility. “Today, no such attitude prevails,” says Prins. “Never before have the government and the Federal Reserve collaborated so extensively by propping up the banking system to the detriment of the population. Never has the world been so quick to push austerity on countries whose only crime was standing in the way of banker speculation. Never have bankers thought this was copacetic. Never have their political alliances been so widespread yet so impersonal. Never have their rewards been so high.”

As I turned the last page in this masterful compilation of financial hubris, a friend called to say to turn on CBS’ 60 Minutes – that a segment was airing on how the stock exchanges are rigged. (It was about how high frequency traders have gamed the marketplace by gaining early access to stock price information through high speed fiber optic cables and trading in front of trades in progress.)

That brought to mind the reality of just how far our Congress has sunk from the inquisitive minds of the 1930s. The U.S. Senate of that era spent years investigating all aspects of the corrupting influences of the Wall Street banks, including stock exchange practices, and the Senate’s findings made front page headlines for years. Five years after the greatest Wall Street crash since 1929 to 1932, stock exchange practices as well as any ongoing, coordinated Congressional investigation of the big picture, has yet to happen. And, each day we learn of new collusion – from rigging of the interest rate benchmark, Libor; to foreign exchange rigging; to rigging of commodities markets, to gaming stock exchange trading.

Where will it all end? Let history be your guide.