Bank of England Drops a Bombshell on Parliament: It Shredded Its Crisis Era Records 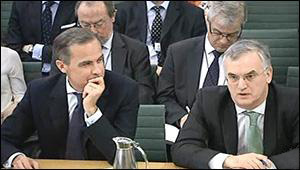 Mark Carney, Head of the Bank of England, and Paul Fisher, Executive Director of Markets, During a Treasury Select Committee Grilling Over Destroying BOE Records

Mark Carney, the head of the Bank of England, and other officials from the BOE were put through a five hour marathon of questioning yesterday by Parliament’s Treasury Select Committee covering everything from how long the BOE plans to continue Quantitative Easing (QE), to the potential for Scotland to vote for its independence, to what it knew and when it knew it about the rigging of the Foreign Exchange market by colluding global banks.

The bombshell of the day, however, did not occur during the session on the Foreign Exchange scandal, which is stacking up to be a more serious matter than the rigging of the Libor interest rate benchmark which occurred under the nose of the Bank of England and the British Bankers Association. (London now seems to be in competition with itself for the prize of the century for overseeing the rigging of the greatest number of markets.)

The bombshell came in the following exchange between the Chair of the Treasury Select Committee, Andrew Tyrie, and a very frightened appearing Paul Fisher, the Executive Director of Markets at the BOE, who has served in that position since 2009. Apparently neither Parliament nor the public knew prior to this exchange that the records of the pre-crisis year of 2007, the financial collapse in 2008, and the monetary policy maneuvers in subsequent years to prevent another Great Depression had been destroyed in one of the world’s most important financial centers; not to mention the fact that critical recordings potentially relevant to the Foreign Exchange probe are also gone.

Chairman Tyrie: “The MPC [Monetary Policy Committee] records might be of interest one day to historians about the inception of QE. MPC records used to be recorded and transcribed when the MPC was created. Is that still the case Mr. Fisher?”

Paul Fisher: “The recordings are not kept. Once the minutes are published…”

Chairman Tyrie: [In a booming, outraged voice] “The recordings are destroyed! Why?

Paul Fisher: “Because we have one copy of the minutes; that’s the one that’s published and there are not alternative versions.”

Chairman Tyrie: “There are more than one purpose for these. There’s the minutes after a fortnight and there’s the historical value. The Fed Open Market Committee publishes full transcripts of its meetings with a five year delay. Whether it’s a five or ten year delay, certainly these are of huge historical significance. Why aren’t you putting something similar in place?”

Paul Fisher: “This goes back to when the Committee first started. They initially did try to make transcripts, unsuccessfully.”

Chairman Tyrie: “What do you mean unsuccessfully?”

Paul Fisher: “It was very hard to actually physically transcribe the tapes in any way which made any sense in terms of the written material.”

Chairman Tyrie: “Is that because you’re shouting and throwing things about. Most organizations manage to transcribe a record. Even the House of Commons manages to do it on a good day.”

Paul Fisher: “I’m trying to explain what I know of it. My understanding is that people talking, very free flowing discussion, and they couldn’t make a sensible transcript.”

Tyrie strongly suggested to Carney and Fisher that the recordings should be preserved in the future and told Carney that he should chair the MPC in such a way that allows people to speak so that all can be heard. 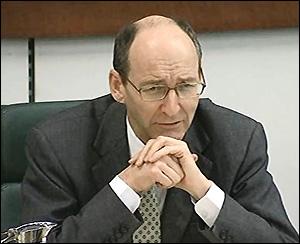 Andrew Tyrie, Chair of the Treasury Select Committee of Parliament in the U.K.

Carney appeared to be attempting to suppress amusement during the exchange between Tyrie and Fisher and then breaking out in a full smile when Tyrie suggested the meetings of the MPC were something of a free-for-all. Carney’s amusement may stem from the fact he has been at the BOE for less than 10 months and can hardly be blamed for the long-term practice of destroying records.

Carney is a former Goldman Sachs banker who went on to become the head of the Bank of Canada, serving in that post during the financial crisis. He is the first non Briton to head the Bank of England in its more than 300-year history. That reality, and his non-British accent, seemed to invite an intensely interrogative style at times during the five hours of questioning yesterday by members of the Treasury Select Committee. Carney remained calm, courteous and professional throughout.

It’s clear to anyone paying attention that the BOE is attempting to clone itself into the Fed – as questionable as that idea might be given that the full transcripts that have been released by the Fed for the crisis years show it had blinders on in terms of the depth of the crisis.

Paul Fisher, as Executive Director of Markets, functions in a role similar to Simon Potter, Executive Vice President of Markets at the New York Fed. The Monetary Policy Committee or MPC at the Bank of England, is the clone of the Federal Open Market Committee or FOMC at the U.S. Federal Reserve Board of Governors. But the MPC only began operating in 1998, three-quarters of a century after the FOMC held its first meeting in 1922.

Now Carney has announced that he is going to create what looks like a clone of the President of the New York Fed (William “Bill” Dudley) through a new Deputy Governor position at the BOE to oversee markets and banking.

Good luck with that. As Wall Street On Parade has repeatedly chronicled, avoiding regulatory capture will likely prove as elusive at the BOE as it has at the New York Fed. And given the seismic nature of the market rigging that has gone on in London, this is like putting a Disney-themed band aide on a compound fracture.