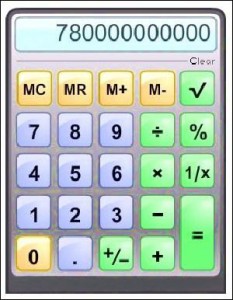 From the very moment one starts a career as a rookie on Wall Street, you are taught the number one Golden Rule of investing by your elders: “Don’t fight the Fed.” If the Fed is hell bent on pumping liquidity into the markets, don’t fight the bull thesis. If the Fed is, for whatever reason, forced to drain that liquidity from the markets, head for the exits before you’re trampled by a stampeding herd.

On September 13, 2012, the Fed’s Open Market Committee (FOMC) announced it would begin buying “agency mortgage-backed securities at a pace of $40 billion per month.” A mere three months later, it more than doubled the ante with this announcement on December 12:

“To support a stronger economic recovery and to help ensure that inflation, over time, is at the rate most consistent with its dual mandate, the Committee will continue purchasing additional agency mortgage-backed securities at a pace of $40 billion per month. The Committee also will purchase longer-term Treasury securities after its program to extend the average maturity of its holdings of Treasury securities is completed at the end of the year, initially at a pace of $45 billion per month.”

Those purchases alone have infused over $1.02 trillion of liquidity into the hands of Wall Street firms which could loan it out to hedge funds to be leveraged by as much as 95 to 1 in stock futures. The U.S. stock market boomed, setting new highs last year.

In addition to new purchases, the Fed has been reinvesting the principal payments from its mass hoard of bonds into more bonds. As of this January 30, according to Fed data, its assets had swollen to just over $4 trillion – a quadrupling of its balance sheet since the Wall Street crisis began in 2008.

To put the Fed’s bond holdings into perspective, PIMCO, one of the largest bond managers in the world, has less than half — $1.97 trillion – of assets under management. The Fed is the central bank of the U.S. in charge of monetary policy; it is not supposed to exert an outsized presence in stock or bond markets.

Since last December, the Fed has announced two $10 billion cuts in its monthly bond purchases; a process dubbed “tapering” on Wall Street. That still leaves Fed Chair Yellen with a $780 billion purse if the FOMC should elect to forego further cuts.

The Fed’s outsized role in the marketplace and the anomalies it is creating became the subject of much debate on November 14 of last year during the U.S. Senate’s confirmation hearing for Janet Yellen to take the reins as Chair of the Federal Reserve Board of Governors.

“We are punishing middle class savers for years now. People who spent an entire working life time choosing to forego consumption because they decided they would save, and they would have a little sum, a little bit of income in their retirement; and now they have no income because they earn nothing on their savings. But they do watch as it gradually gets eroded even by a low level of inflation when they have no income from it. We have exacerbated the problems of underfunded pension plans, and we’ve got distortions in financial markets.”

Toomey added that while these were obvious worries, what worried him even more was what would happen when the Fed cuts back. Toomey characterized his concern as “what happens when this morphine drip starts to end”?

Yellen responded to Toomey: “I would argue that we can’t have normal interest rates unless the economy is normal.”

“I found your testimony about asset bubbles to be interesting. Just before the Chairman turned to me I looked at where the Dow was at. It’s about 15,850 in an economy that, quite honestly, most everybody would recognize as having too much unemployment, an economy where people continue to struggle, an economy where it’s kind of hard to see where the growth is going to be. We’re now starting to see real estate bidding wars just like the old days…I see asset bubbles. And I think if you were to announce today that over the next 24 months you’re going to bring that balance sheet down from $4 trillion to zero, or $1 trillion – I think if you even said over the next four years we’re going to bring it down from $4 trillion to zero – I think we would see how big those asset bubbles are.”

Yellen said it is true that private investors are coming into the real estate markets and often paying all cash in some markets. Yellen’s view is that this is not an asset bubble but a logical response by the market to buy in the hardest hit areas where prices have collapsed.

Johanns responded: “I think the economy has gotten used to the sugar you’ve put out there. And I just worry that we’re on a sugar high. And that is a very dangerous thing for the little person out there who is just trying to pay the bills and maybe put a buck away for retirement. Last thing I’ll say is the flip side of your policies that you’re advocating for are very, very hard on certain segments of our society. You know, explain to the senior citizen who is just hoping that CD will earn some monies so they don’t have to dig into the principal what impact you’re having…”

Senator Bob Corker, a Republican from Tennessee, stated that the market’s reaction last year to just a mention that the Fed might begin to taper its bond purchases looked like the Fed “had touched a hot stove.”

The hot stove has turned into smoldering embers around the world as global stock markets have lost approximately $2.9 trillion in value since the new year, and the Fed’s taper, began. The Fed, unfortunately, finds itself between a rock and a hot stove. To continue or increase its bond purchases would simply postpone the painful exit to a future date. It could also run the risk of inflating an even more dangerous bubble and an even harder landing.

Yellen may have the reins but it is increasingly looking like she may be pushing on a string.