Wall Street Mega Banks Own Tankers, Pipelines, Utilities, Mines, Metal Warehouses – And That’s Not the Worst of It 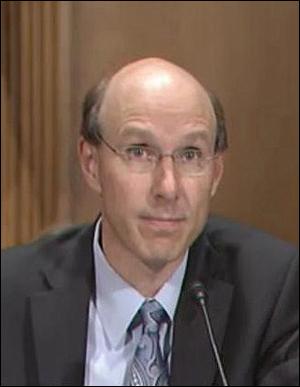 Michael Gibson, the Federal Reserve’s Director of the Division of Banking Supervision and Regulation Has No Law Degree; He’s An Economist

There was a distinct chill in the air yesterday as questioning got underway in the U.S. Senate’s hearing on whether the Wall Street mega banks that caused the greatest economic collapse since the Great Depression from 2008 through 2010 should be allowed to effectively control the price of aluminum and other metals by owning metal warehouses and creating bottlenecks in delivery; or allowed to own oil pipelines, terminals and tankers while trading trillions of dollars a year in oil futures – potentially rigging that market against the consumer.

It’s not that there’s limited evidence that these firms will rig markets. These are the same firms that are serially charged and pay enormous fines for fraud and cartel-like behavior. Traders even refer to themselves as “The Cartel” and “The Bandits’ Club” in chat rooms.

The hearing was called by Senator Sherrod Brown, Chair of the Subcommittee on Financial Institutions and Consumer Protection, part of the Senate Banking Committee. And there was good cause for a chill in the air. Despite the most costly bailout of Wall Street in the history of finance after its collapse in 2008, not one of the seven Republican members of this subcommittee showed up at the hearing; not one submitted a question to be asked of the witnesses.

Then there was the fact that the day before the hearing, the Federal Reserve — which was set to testify at the hearing and is the very entity that is solely responsible for allowing Wall Street to turn itself into a commodities cartel by giving the firms waivers to enter the businesses — engaged in one of its favorite stalling tactics. The Federal Reserve issued a request for public comment to a long-winded series of questions on Wall Street owning and/or storing commodities with a deadline two months away; after which time it said it would study the question some more. The long series of questions posed by the Fed are exquisitely wide enough for Wall Street’s legions of lawyers, lobbyists and trade groups to twist in their favor in the typical 20-page legalistic responses.

Senator Brown called this maneuver by the Fed “timid.” Senator Elizabeth Warren, a participant at the hearing, called it “meager.”

Another chill came when Michael Gibson, one of the witnesses at the hearing who holds the position at the Federal Reserve of Director of the Division of Banking Supervision and Regulation, told the Senators that he is “not a lawyer.” Let that settle in. The Federal Reserve is the primary regulator to the most complex and serially malfeasant banking giants in U.S. history but the man atop the division that supervises and regulates them has no background in banking or securities law. What is Gibson’s background? According to the Federal Reserve, “Gibson holds a Ph.D. in economics from the Massachusetts Institute of Technology and a B.A. in economics from Stanford University.”

This might explain why, when Gibson was pressed on questions of how many enforcement actions he had brought against Wall Street firms, he had to turn to his colleagues behind him, who apparently couldn’t answer the question either. Gibson had to say he would get back to the Senators on that question.

Gibson’s background is just one more example of why the Federal Reserve is deservedly gaining the reputation as a strange duck regulator with speed dials to Wall Street, trading desks, relationship managers and routinely ignored, glaring conflicts of interest. 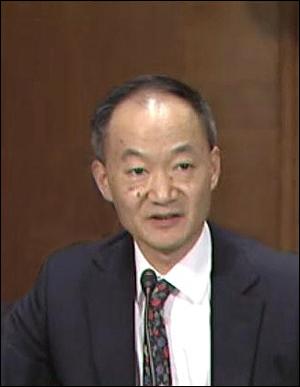 Norman Bay of FERC Testifying at Senate Hearing on January 15, 2014

Norman Bay, the Director of the Office of Enforcement at the Federal Energy Regulatory Commission (FERC), cited examples of fraudulent activity by Deutsche Bank, Barclays, and JPMorgan. In the JPMorgan case, FERC forced the bank to pay a combined $410 million in civil penalties and disgorgements to ratepayers in July of last year. At the time, FERC said JPMorgan engaged in 12 manipulative bidding strategies that resulted in the overpayment of tens of millions of dollars to JPMorgan in energy markets in California and the Midwest.

And what did Norman Bay do before coming to FERC?  He was a Professor of Law at the University of  New Mexico School of Law, where he taught Criminal Law, Evidence, and Constitutional Law — a fitting background for a regulator of Wall Street.

Senator Elizabeth Warren was rightfully testy to learn that FERC was still not getting a live data feed of Large Trader Reports from the Commodity Futures Trading Commission (CFTC) so that it could properly investigate if Wall Street was attempting to rig energy markets under the purview of FERC. Under the current structure of information sharing, FERC has to go to CFTC offices and review data on a case by case basis. Senator Warren asked the witness from the CFTC, Vince McGonagle, Director of the Division of Market Oversight, to make sure that FERC’s easy access to Large Trader Reports happened – soon.

McGonagle is also a lawyer with 16 years experience in the Division of Enforcement at the CFTC. He previously served as a staff attorney at the Department of Energy; again, the kind of background one would expect of a Wall Street regulator.

It is noteworthy that the Federal Reserve, on whose watch the collapse of Wall Street occurred, was given increased regulatory powers under the Dodd-Frank financial reform legislation – despite outcries from many quarters. And notwithstanding all that, of the three regulators testifying yesterday, only the Federal Reserve’s top dog of supervision and regulation is an economist, not a lawyer.

Senator Brown told the participants at the hearing that “the six largest U.S. bank holding companies have 14,420 subsidiaries, only 19 of which are traditional banks.” In July 2012, the Federal Reserve Bank of New York issued a study titled A Structural View of U.S. Bank Holding Companies. That report presented a frightening picture of the encroachment of banks into commodities and the industrial side of the U.S. economy.

The study showed that U.S. bank holding companies owned 16 utilities; 479 insurance companies; 2,388 real estate firms; 1,682 healthcare and social assistance companies; and 5 mines. We know from more recent revelations that Wall Street’s largest banks own at least 104 metal warehouses with complaints coming from beer and soda manufacturers that these firms control the London Metal Exchange and are rigging the price of aluminum to the detriment of both the manufacturers and consumers.

Yesterday’s hearing accentuated the fact that with enablement from the Federal Reserve, the public has very limited access to information on just how extensive Wall Street’s control and ownership of physical commodity firms actually is.

On July 24 of last year, at another hearing to delve into this same issue, Senator Brown asked the participants the following:

“Do the benefits of combining these activities outweigh the harm to consumers and manufacturers? Can regulators or the public fully understand these large, complex financial institutions and the risks to which these firms are exposing themselves – and the rest of society? Are the laws and regulations sufficiently stringent and transparent, and are regulators enforcing them aggressively enough? And what do we want our banks to do – make small business loans or refine and transport oil? Issue mortgages or corner the metals market?

“There has been little public awareness of, or debate about, the massive expansion of our largest financial institutions into new areas of the economy. That is, in part, because regulators have been less than transparent about basic facts…”

Senator Brown also suggested that Wall Street is not owning up to the vast extent of their holdings, saying: “…physical commodities activities are not comprehensively reported – they are buried deep within various subsidiaries like their Fixed Income, Currency & Commodities units; asset management divisions; and other business lines. Their specific activities are not subject to transparency and are often buried in arcane regulatory filings.”

All of this opacity may be about to change, with no help from the Federal Reserve. Two days ago, Senator Carl Levin issued a statement confirming that his Permanent Subcommittee on Investigations has an ongoing investigation into this matter.