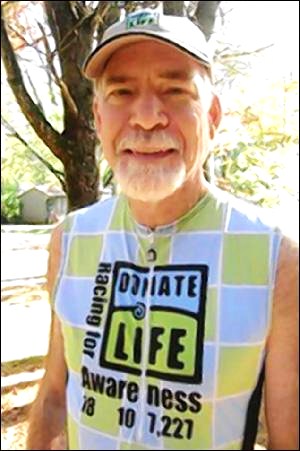 David Bird, a reporter who covers energy markets for the Wall Street Journal, has been missing for nine days. Bird, who has worked for the parent of the Wall Street Journal, Dow Jones, for more than 20 years, left his Long Hill, New Jersey home on the afternoon of Saturday, January 11, telling his wife he was going for a walk. Despite a continuous search by hundreds of volunteers and law enforcement officials, Bird has not been located.

Bird is 55 years old, approximately 6’1, and was last seen wearing a red jacket with yellow zippers according to officials. He and his wife, Nancy, have two children, ages 12 and 15. Anyone with information is asked to contact the Long Hill Police at (908) 647-1800.

According to a report in the Wall Street Journal, Bird is a liver-transplant recipient and is required to take medication twice a day. He did not take his medication with him when he left for the walk.

NBC reported that sources close to the family said one of his credit cards was used in Mexico last Wednesday. Other media outlets have been unable to confirm that report. In the same news story, NBC reported that “the family believes that his coverage of OPEC may be related to his disappearance.”

However, a careful review by Wall Street On Parade of the articles Bird has written for the Wall Street Journal since last October, shows that what he was regularly reporting on was a supply imbalance caused by overproduction of shale oil in the U.S. in the face of slacking demand.

On October 21, Bird wrote that “U.S. crude-oil futures Monday settled 1.6% lower, dropping to less than $100 a barrel for the first time since July on rising inventories and weak refiner demand. Prices dropped as the Energy Information Administration [EIA] reported U.S. crude-oil stocks rose for a fourth straight week, to the highest level since late June…The sluggish demand from refiners allows crude stocks to climb four-million barrels in the week ended Oct. 11, the EIA said in a report that was delayed from last week due to the government shutdown. That is the latest piece of a four-week build of 18.9 million barrels in stocks that has put pressure on prices, as refiners have lowered crude-oil processing runs by 1.26 million barrels a day since mid September…”

Bird also connected the Federal Reserve’s bond buying program as “supportive for crude oil and other commodities…” In other words, oil and other commodity prices would no doubt be slumping further were it not for the $85 billion per month cash infusion into markets by the Fed. (The Fed has trimmed that amount by $10 billion beginning this month.)

On November 11, Bird wrote: “Americans are seeing the lowest pump prices for gasoline since February 2011, AAA says. Gas prices dropped 6.6 cent per gallon the past week to $3.186, which is down 25.3 cents from a year earlier. The average in Kansas, Arkansas, Louisiana, Missouri, Oklahoma and Texas is below $3.”

An article penned by Bird on December 12 raised more concerns about “rising fuel inventories.” Bird said “EIA’s implied demand figures showed diesel/heating oil demand was at the lowest level for this time of year for 15 years, while gasoline demand for the week was the weakest early December level in 12 years.”

Statements like that contradict the thesis that the U.S. is on the path to economic recovery.

On December 16, Bird wrote that “The U.S. is on track to reach records for crude-oil production by 2016, as hydraulic fracturing and horizontal drilling techniques continue to unlock oil in shale rock…In just eight years, the U.S. will have turned around from a 62-year production low of 5 million barrels a day to near the all-time high of 9.6 million barrels a day, according to a report by the Energy Information Administration released Monday…Surging domestic production has pushed U.S. oil prices below the global benchmark, with the gap at about $12 a barrel Monday.”

In the same article, Bird quoted EIA administrator Adam Sieminski saying that “advanced technologies for crude-oil and natural-gas production are continuing to increase domestic supply and reshape the U.S. energy economy as well as expand the potential for U.S. natural-gas exports.”

While those words are certainly not music to the ears of OPEC, Bird is simply reporting from public documents released by EIA. He is not setting energy policy that is adverse to OPEC.

On January 9, just two days before his disappearance, Bird suddenly threw some cold water on the oversupply thesis, writing that “Natural gas output in the U.S. is hitting record levels, but there is mounting evidence that the best days of the shale boom are over. Government data released Tuesday show production climbed to 70.21 billion cubic feet in 2013. Output grew by just 1.5% from 2012, the slowest rate since output fell in 2005, before widespread use of new drilling technologies began to unlock massive quantities of natural gas from shale rock formations. The EIA is projecting output to rise by 2.1% in 2014 and 1.3% in 2015.”

One report by his colleagues at the Wall Street Journal, where Bird is listed as a contributor, did discuss OPEC’s attitude toward the increasing shale production in the U.S. The article appeared on December 2 and was written by Sarah Kent, Nicole Lundeen and Summer Said. It said Saudi Arabia and other Persian Gulf oil producers were acknowledging that “surging oil production” in the U.S. was having an impact on the price it could charge for its oil in the U.S. The article noted that this statement conflicted with prior statements from OPEC which implied that shale oil was “hurting only their West African counterparts.”

Kent, Lundeen, and Said explained in detail as follows:

“U.S. crude-oil output in the week ended Nov. 22 topped 8 million barrels a day for the first time since January 1989…

“According to data provided by Argus Media, the weekly average price of the Argus Sour Crude Index—the benchmark against which Gulf countries price the oil they sell to the U.S.—fell from just under $106.10 a barrel at the beginning of August to $90.60 a barrel in the last week of November, with the price difference to Europe widening from around $2.00 a barrel to around $20.00 a barrel.

“The decline in prices in the U.S. has triggered speculation over whether Gulf producers might reduce the volume of oil they sell to the U.S., a move that would further weaken an oil-based diplomatic relationship that has endured for decades.

“However, speaking as he arrived in Vienna earlier Monday, Saudi oil minister Ali al-Naimi shrugged off the developments in the U.S. as temporary. Although he acknowledged that ‘there is too much crude in the U.S.,’ he said rising global demand could offset the increase in supply.”

The U.S. Senate’s Permanent Subcommittee on Investigations, chaired by Senator Carl Levin, is currently investigating the role played by large Wall Street firms in owning tankers, terminals, and pipelines that store or transport oil while simultaneously speculating on the price of oil in the futures market. The investigation is broad in scope and includes Wall Street’s ownership of other commodities. It is understood that the investigation will also look at allegations by beer and soda manufacturers that Wall Street has gained control of the London Metal Exchange and metal warehouses where they have created bottlenecks in the supply of aluminum, raising prices to both the manufacturers and consumers for canned beer and soda.