State of the Union: President Obama to Become a Super Hero Action Figure 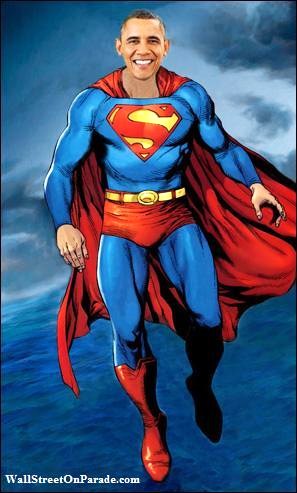 Remember the line from the iconic movie, Dirty Dancing – “nobody puts baby in a corner”? That basically sums up the President’s game plan for 2014 that he will unveil tonight in his State of the Union address.

The key elements of the plan have been leaking over the past two days. Yesterday at a White House press briefing, in answer to a question about the State of the Union speech, Press Secretary Jay Carney said:

“I think restoring security and economic vitality to the middle class is a very ambitious goal.  Restoring opportunity for all and expanding opportunity for all, those are very ambitious goals.  And those are the goals the President has identified…mindful of Congress’s reluctance to be cooperative at times, the President is going to exercise his authority.  He’s going to use his pen and his phone…And it would be the wrong thing to do for this President or any President to judge the progress we make as a nation, in Washington — both in Washington and beyond, only by the number of bills we get passed through Congress, because the opportunity for advancing the agenda that the President has through other means is broad and deep, and he’ll explore it.” (The italic emphasis on pen and phone and broad and deep is our own.)

Today, the President has fired his first salvo to show the obstructionists in Congress that his pen can sometimes be just as mighty, and a lot faster, than legislation. The White House released news this morning that the President will sign an executive order raising the minimum wage for federal contract workers on new contracts to $10.10 per hour from the current $7.25. According to the announcement, the raise will affect a broad range of workers from janitors to construction workers to “military base workers who wash dishes, serve food and do laundry.” 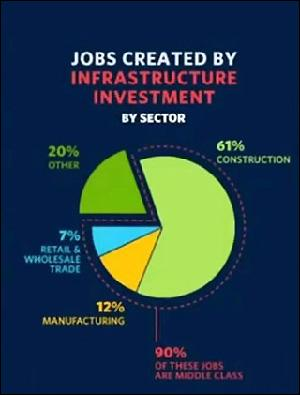 The President is also expected to speak tonight about the country’s infrastructure and how investment in building new bridges, roads and schools leads to improved job opportunities for the middle class. In an email sent out to the press highlighting the fact that graphs will be available to buttress points being made by the President in tonight’s speech, one graph illustrated that 90 percent of the jobs created from infrastructure investment go to the middle class, as opposed to, let’s say, the millionaire owners of the companies contracted to do the work.

U.S. Representative Earl Blumenauer, a Democrat from Oregon, appeared to be doing a little advance work for the President in a column at the Huffington Post yesterday. Congressman Blumenauer wrote:

“As we prepare for President Obama to give the annual State of the Union Address a little more than 24 hours from now, it is an appropriate time for us to take a hard look at the literal, physical state of our union. The bonds that keep us together as a country — the roads, tunnels, bridges, pipes, sewers — are degrading at an incredible pace. If we do not act now to maintain and repair our infrastructure, we will face much higher costs in the future, not just for the country, but for families on a daily basis.”

Blumenauer indicated that the American Society for Civil Engineers estimates that $3.6 trillion in infrastructure investment is needed by 2020, and that the Nation’s declining transportation system could result in the loss of 876,000 jobs by then. He said Congress had to “gather the political courage to address this problem now.”

According to John Harwood, writing in the New York Times, infrastructure investment in the U.S. has “plummeted” over the last half-century. Harwood notes that “spending on what the federal government classifies as investments peaked in 1968 at 6.6 percent of the economy, twice the current proportion.”

According to the White House announcement this morning, the President will also be speaking tonight about the critical need to raise the minimum wage for all workers to make sure that “no family of four with a full-time worker has to raise their children in poverty.” Currently, there are 46.5 million people living below the poverty level in America, including approximately one in every five children.

Despite the greatest income inequality in the industrialized world, it has been seven years since Congress increased the minimum wage. The White House said this morning that “adjusted for inflation, today the real value of the minimum wage is roughly the same as what it was in the 1950s.” Currently, a full time minimum wage worker is making $14,500 per year.

Creating new and better paying jobs through infrastructure investment and raising the minimum wage will have a positive impact on improving the Nation’s wealth inequality – a matter of national security to anyone willing to research the issue.

Last year, former Labor Secretary Robert Reich did just such research and released it in a documentary titled “Inequality for All.” The President’s little graph on infrastructure jobs can’t hold a candle to the graph Reich unveiled in the film.

Reich’s graph shows that in 1928 and again in 2007 – the years before the two greatest financial crashes in U.S. history, income inequality peaked at unprecedented levels. Reich’s research demonstrates that there is a delicate equilibrium of income distribution at which the U.S. economy can function properly. Since 70 percent of U.S. Gross Domestic Product (GDP) is consumption, when workers are stripped of an adequate share of the nation’s income, they are not able to function as consumers. Less consumption means lower corporate earnings, resulting in layoffs and a self-perpetuating downward spiral.

Income Inequality Graph from Robert Reich's Film, "Inequality for All."

Instead of looking at raising taxes on the super rich as wealth redistribution, it should be correctly seen as empowering the middle class to stimulate the economy by having access to a greater share of the profits they produce. Likewise, it is not the super rich and their corporations that create jobs, it is the middle class and their disposable income and purchasing power pulsating through the economy that creates jobs. Empower the middle class with good paying jobs and you provide the most efficient and effective economic stimulus of all.

Will the President be successful in his new role or will the super stealthy corporate political party recently outed in the New York Times as The Koch Party (also known as the Party of No) use its unlimited cash hoard on Kryptonite to stop the President from a single bound?

One thing is for certain: the fate of a Nation hangs in the balance.