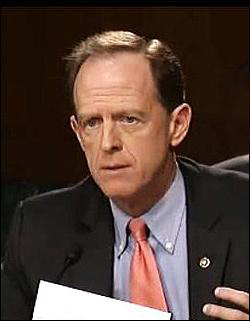 This time around, Republican members of the U.S. Senate Banking Committee want to go on record that they not only see a train wreck coming from the Fed’s easy money policy, but have described it in unmistakable terms to Janet Yellen, the President’s nominee to lead the Federal Reserve.

During the recent Senate Banking confirmation hearing of Yellen, three Republican Senators were particularly outspoken about the dangers lurking in the Fed’s policy of pumping $85 billion a month, a whopping $1.02 trillion a year, into Wall Street coffers via bond purchases from the Street. The policy is known in Wall Street jargon as QE3, shorthand for Quantitative Easing, round 3. By preventing a surplus of bonds on the Street, the Fed is keeping interest rates artificially low in hopes of stimulating economic recovery. The flip side of that effort, however, is to flood Wall Street with the funds to engage in higher risk investing.

“We are punishing middle class savers for years now. People who spent an entire working life time choosing to forego consumption because they decided they would save, and they would have a little sum, a little bit of income in their retirement; and now they have no income because they earn nothing on their savings. But they do watch as it gradually gets eroded even by a low level of inflation when they have no income from it. We have exacerbated the problems of underfunded pension plans, and we’ve got distortions in financial markets.”

Toomey added that while these were obvious worries, what worried him even more was what would happen when the Fed cuts back on its QE3. Toomey characterized his concern as “what happens when this morphine drip starts to end”?

Yellen responded to Toomey: “I would argue that we can’t have normal interest rates unless the economy is normal.”

“I found your testimony about asset bubbles to be interesting. Just before the Chairman turned to me I looked at where the Dow was at. It’s about 15,850 in an economy that, quite honestly, most everybody would recognize as having too much unemployment, an economy where people continue to struggle, an economy where it’s kind of hard to see where the growth is going to be. We’re now starting to see real estate bidding wars just like the old days…I see asset bubbles. And I think if you were to announce today that over the next 24 months you’re going to bring that balance sheet down from $4 trillion to zero, or $1 trillion – I think if you even said over the next four years we’re going to bring it down from $4 trillion to zero – I think we would see how big those asset bubbles are.”

Yellen agreed that they are seeing private investors coming into the real estate markets and often paying all cash in certain markets. Yellen said she doesn’t see this as an asset bubble but as a logical response by the market to buy in the hardest hit areas where prices have collapsed.

Johanns responded: “I think the economy has gotten used to the sugar you’ve put out there. And I just worry that we’re on a sugar high. And that is a very dangerous thing for the little person out there who is just trying to pay the bills and maybe put a buck away for retirement. Last thing I’ll say is the flip side of your policies that you’re advocating for are very, very hard on certain segments of our society. You know, explain to the senior citizen who is just hoping that CD will earn some monies so they don’t have to dig into the principal what impact you’re having…”

Senator Bob Corker, Republican from Tennessee, appeared to throw Reaganomics under the bus in his testimony, telling Yellen:

“In many ways, easy money is an elitist policy. It’s the ultimate trickle down and that, you know, it’s based on the premise that you’re gonna have this wealth creation; and what we’ve seen obviously is the largest Wall Street institutions have done the best and that fund managers have made a lot of money. But it really hasn’t trickled down to the economy. And as you were mentioning earlier, it’s a blunt object. Would you agree that while it has been an attempt to stimulate the economy, the more well off have benefited much better than those at the lower end of the spectrum.”

Yellen conceded that the policy has boosted the stock market but argued that it has also been broadly beneficial to all Americans who own homes, ostensibly by boosting their equity values.

Corker argued that the market’s reaction earlier this year to just a mention that the Fed might begin to taper its bond purchases looked like the Fed “had touched a hot stove.” As a result, Corker said, the “Fed jumped back” and has now “become a prisoner to its own policy.”

It’s tough to argue with much of what these Senators are saying. The problem for the broader Republican party is that they don’t have a viable alternative idea for stimulating economic growth and pretty much no one believes they are champions of the little guy.