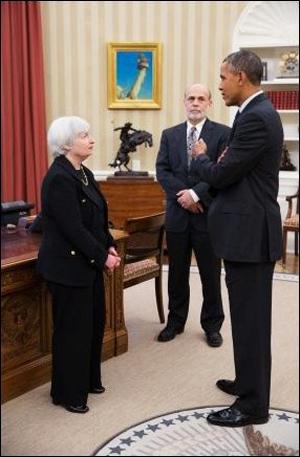 The Federal Reserve system turns 100 this coming December 23. Today, for the first time, a woman will undergo a Senate confirmation hearing to lead the Fed – an historic first.

But gender is the last thing on anyone’s mind today when it comes to the new Fed Chairman. The Republicans are simmering over what they feel are “easy money” policies at the Fed. Wall Street will be measuring every syllable for a hint of when the Fed’s cash punchbowl of $85 billion a month in bond purchases might end. A few Democrats will delicately quiz Yellen on her views on ending too big to fail banks.

What is very unlikely to emerge amid the theatrics in the Senate Banking confirmation hearing this morning, is the most basic question of all: how did a 100-year old institution created to implement independent monetary policy in the U.S. became a regulator and examiner of banks. By its very structure, the Federal Reserve is too deeply conflicted to ethically and productively engage in this role. The fact that the Fed’s examiners were sitting in the mega banks in the years leading up to the financial collapse in 2008 but managed to miss a multitude of warning signs is a clear indictment of the Fed’s proficiency as a regulator.

It’s bullet point two in that list that is completely incompatible with the very structure of the New York Fed.

From 2001 through 2006, Sanford (Sandy) Weill, Chairman and/or CEO of Citigroup during that period, served on the Board of Directors of the New York Fed, the bank’s regulator. During that period, the bank was amassing tens of billions of dollars of off balance sheet debt in Structured Investment Vehicles (SIVs). The bank is only alive today because the Federal government infused $45 billion in capital, guaranteed over $300 billion in assets and allowed the New York Fed to infuse over $2 trillion in low-cost loans to the insolvent institution.

During Weill’s six years on the Board of the New York Fed, he continued to extract obscene compensation from Citigroup. In just the year 2003, Weill cashed in $264 million of Citigroup shares he had amassed in a stock options scheme. The firm was kind enough to purchase the shares directly from Weill. The savvy Weill walked away from the bank a billionaire; two years later it collapsed into the arms of the taxpayer.

Weill was replaced on the Board of the New York Fed with Jamie Dimon, Chairman and CEO of JPMorgan Chase. Dimon served for six years in that capacity, leaving the post at the end of 2012.

During 2012, while sitting on the Board of the bank’s own regulator, Dimon was grilled before multiple Congressional committees over JPMorgan Chase using insured deposits to gamble in high risk derivatives. The bank has owned up to losing at least $6.2 billion in the gambles.

JPMorgan Chase is the largest bank in America by assets. According to its recent SEC filings, it is now under eight civil or criminal investigations by the U.S. Justice Department.

The structure of the Board of this regulator is far from the only glaring conflict. As we reported last year at Wall Street on Parade, on January 27, 2009, William C. Dudley was promoted to President and CEO of the New York Fed. According to the institution, “New York Fed employees are subject to the same conflict of interest statute that applies to federal government employees (18 U.S.C. Section 208).” That statute notes that the conflicts of the spouse become the conflicts of the employee.

In addition, according to a January 22, 2009 letter in the disclosure packet, Dudley’s spouse was to receive “deferred income distributions from JPMC in the aggregate amount of approximately $190,000 annually.  These disbursements will wind down and cease in 2021.”

To put this in simple terms, the top official of the regulatory body overseeing JPMorgan Chase was receiving $190,000 per year in household income from the bank he was supervising.  If Dudley was the named beneficiary of his wife’s assets, he had a current interest in $1.75+ million from JPMorgan Chase.

Janet Yellen released the transcript of the prepared statement she will deliver in advance of her questioning by the Senate Banking committee. One sentence stands out as noteworthy and deeply problematic: “Banks are stronger today, regulatory gaps are being closed, and the financial system is more stable and more resilient.”