Ryan Chittum Has Had It With Hank Greenberg and Maria Bartiromo 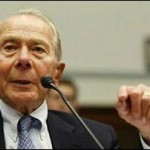 Last week, Ryan Chittum, writing for the Columbia Journalism Review, unleashed the simmering disgust of hundreds of editors and reporters across America: why won’t former Chairman and CEO of AIG, Maurice (Hank) Greenberg, just shut up and go to trial on his eight year old charges of engaging in accounting fraud at his former company. He’s now on his third New York State Attorney General who has valiantly tried to let this case see the sunshine of a jury trial.

What Greenberg has done instead is to pay the law firm of superlawyer David Boies to motion our courts to death while his army of pr flacks try his case on CNBC and in the opinion pages of the Wall Street Journal. Greenberg’s latest soiree into fantasy land came in an October 2 piece in the Wall Street Journal where Greenberg empathized out loud with JPMorgan’s Jamie Dimon, who is currently under multi-continent investigations for alleged wrongdoing.

Well, Chittum has had it. I mean, had it. In a headline at CJR last Friday, Chittum called Greenberg “narcissistic and deluded,” adding later in the article that Greenberg “has a case of oligarch empathy for Dimon—the kind that allows him to once again, despite all the evidence, claim to have been wrongly martyred…”

Taking on Greenberg’s revisionist history of the fall of AIG, Chittum warns readers to “Bust out your hip waders. It’s deep here,” then moves on to differentiate fact from Greenberg fiction:

“…Greenberg’s charge that ‘Nearly all of Mr. Spitzer’s original allegations of accounting irregularities have been discarded or quietly dismissed by him and his successors’ is misleading, to say the least. Greenberg was forced out of AIG in 2005 by his board of directors, which then paid $1.6 billion—the largest regulatory settlement in history at the time—to New York and the Bush SEC for securities fraud involving ‘improper accounting, bid rigging and practices involving workers’ compensation funds’ and restated years of inflated profits, reducing them by $4 billion. Several executives from General Reinsurance and AIG were convicted criminally for fraud, though those were later overturned on appeal. The execs then paid fines and ‘acknowledged that parts of the transaction were fraudulent, that they disregarded red flags suggesting the deal would be ‘improperly accounted for,’ and that they ‘should have attempted to stop it from going forward, but instead continued to participate in it…’

“Greenberg himself paid $15 million to settle the SEC’s fraud case against him, and he and three other execs paid $115 million to AIG to settle a shareholder lawsuit over the fraud.”

Chittum makes a reference to CNBC host Maria Bartiromo, who claims Hank Greenberg is “clean as a whistle, don’t you know?”

Last year, on July 13, Bartiromo grilled former New York State Attorney General, Eliot Spitzer, on her program, effectively accusing him of a personal vendetta against Greenberg for bringing unsupported charges of fraud. It was quite a brouhaha for a cable financial news program with Spitzer waving a 29-page court opinion at Bartiromo, saying she had her facts all wrong.

Pretty much making Chittum’s case for him, Bartiromo had none other than Hank Greenberg on her CNBC program yesterday afternoon to rehash his opinion piece in the Journal.

Here’s the problem for Greenberg today. On June 25 of this year, Judge Robert Smith, joined by six other New York State justices, ruled that his case must go to trial. And, in doing so, they used the dreaded “F” word that Greenberg and Bartiromo refuse to concede is a legitimate claim. Writing for the court, Judge Smith said:

“We have no difficulty in concluding that, in this civil case, there is evidence sufficient for trial that both Greenberg and Smith participated in a fraud. The credibility of their denials is for a fact finder to decide.”

Shortly after the court decision was issued, Attorney General Eric Schneiderman’s office released this statement to the New York Times:

“Attorney General Schneiderman feels strongly that individuals in the financial services industry who perpetrate fraud, no matter how wealthy or powerful, must be held publicly accountable, and that is why we believe justice will best be served by proceeding to a long overdue trial of Mr. Greenberg as quickly as possible.”

We’re now eight years and counting on motions and pr spin. The American people need to see justice in this matter.