New York State Is Facing a Contagion of Corruption 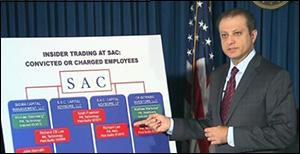 US Attorney Preet Bharara Files a Criminal Indictment Against SAC Capital on July 25, 2013

The Obama Justice Department, ensconced with partners from the law firm, Covington & Burling, which helped Big Tobacco hide the dangers of smoking for decades, believes in this formula: money = justice. Thus, SAC Capital Advisors LP, the hedge fund charged with securities fraud and encouraging a culture of insider trading, is rumored to be about to offer up more than $1 billion to settle its charges. That follows on the heels of the $1 billion and counting that JPMorgan Chase has recently paid to settle a mountain of charges of wrongdoing. There’s said to be many more billions in settlements waiting in the wings for JPMorgan to escape trials over serial corruption.

“Pay to Play” as it previously applied to Wall Street meant the giving of a bribe to get business. The concept has now expanded to suggest that one can simply pay a large fine for fraudulent acts in order to play again another day – often in the same corrupted playground.

At the same time that the crimes of the one percent are overwhelming the investigative capacities of prosecutors, corruption among judges and elected officials in New York State is expanding at an exponential rate, as we point out today in our CounterPunch article.

When everyday folks write to U.S. Attorney Preet Bharara asking for an investigation into the crimes committed against them, the complaint often goes nowhere because his office is too busy chasing down billion dollar settlements with Wall Street and its legions of $800 an hour lawyers. At our last count, the Justice Department had 7 separate investigations open against just JPMorgan. Calling SAC Capital a “veritable magnet for market cheaters,” six employees have already pleaded guilty while charges and/or trials remain pending against numerous others.

In the meantime, according to testimony before the New York State Moreland Commission on Public Corruption, the state itself has become a veritable magnet for public servant cheaters. The public has not only lost trust in New York’s seminal industry of Wall Street, it has lost trust that law enforcement within the state has the integrity, the will, and the independence to root out the crimes and protect the general citizenry.

If moral example flows from the President and through those he places in high office, it’s easy to see why we are in such trouble. The insurmountable conflicts of interest of the President’s installed nominees at the U.S. Treasury Department, the Securities and Exchange Commission, and the U.S. Department of Justice are killing public trust.

Jeffrey St. Clair, Editor at CounterPunch, sums up the situation perfectly in his column on the web site today:

“Obama is the executive manager of what the British punk band the Mekons called the ‘Empire of the Senseless.’ By this, I don’t mean an empire that is inchoate, but a government that doesn’t sense, that doesn’t feel, that is immune to the conditions and desires of the governed.”

As the market now anticipates JPMorgan moving from a $1 billion settlement to an $11 billion settlement, the Obama administration seems incapable of understanding that these escalating sums simply mean that crime is out of control; that money does not equal justice.