Millions of Americans, if not most Americans, have no idea how to go about checking their investment statements for accuracy and to protect against fraud. In that respect, Bernard L. Madoff might render a service to the country – if we pay close attention.

To veterans of Wall Street who handle retail accounts (those for the average individual investor), there has been the ongoing mystery as to how Madoff could have created fake account statements for thousands of clients showing the nitty-gritty details that we know to be captured on legitimate account statements.

For example, every transaction that generates cash into the account must be captured: the quarterly payment of dividends on a stock or semi-annual interest on a bond; the proceeds of a sale of a security; the payment of interest on a money market fund used to “sweep” the proceeds of sales. (And, of course, there are also the transactions that remove cash from the account such as stock purchases and payouts.)

To determine how Madoff carried out his fraud for decades, the Trustee of the recovery fund, Irving Picard, hired super sleuth Bruce G. Dubinsky, a Managing Director at Duff and Phelps, to conduct a forensic accounting of the Madoff business. Dubinsky found that during the 1970s when Madoff was claiming to deploy a convertible arbitrage trading strategy, “dividend payments and/or accrued interest were not reported” on many of the account statements. That this went undetected by customers and their accountants is testimony to how many Americans, even today, open their account statements, check the total value on page one, then shove the document into a file never to be seen again.

A convertible arbitrage trading strategy looks for pricing discrepancies between the market value of the convertible bond (or convertible preferred stock) versus the value of the common stock it would eventually convert into. Dubinsky, in his forensic report, explains what Madoff was really doing:

“The so-called ‘convertible arbitrage trading strategy’ purportedly implemented by BLMIS [Bernard L. Madoff Investment Securities] in the 1970s utilized fictitious trades that in many instances exceeded the entire reported market volume for the particular security on the day it was purportedly traded. On numerous trading days, trades were recorded at prices that did not represent true prices, as the prices reported for the purported trades were outside the range of market reported trading prices on a given day. Dividend payments and/or accrued interest were not reported by House 17 on many customer statements even though the real convertible securities paid such dividends and/or interest. Further, convertible securities were reported by House 17 as being traded on days after the actual date of conversion reported by the issuing corporation, thereby evidencing the fictitious nature of the purported trades. Lastly, there was no evidence that the purported convertible securities were ever actually converted, again supporting the fictitious nature of the purported trading activity.”

House 17 was how Madoff employees referred to the firm’s IA or Investment Advisory business – the Ponzi scheme that at the time of its collapse showed over $64 billion in fictitious market value on client account statements.

In the 1990s, when Madoff decided to tell his clients he had switched his trading strategy to a “split-strike conversion” strategy (buying large cap stocks hedged with options), he started showing the payment of quarterly dividends on the stocks held in the account. Of course, both the payments and the stocks were fictitious – Dubinsky found no actual trading was done for the benefit of the clients of the Investment Advisory business.

While clients examining their statements at this point could see the inclusion of quarterly dividend payments, had they looked very closely at transaction dates on trades, they would have seen big red flags. According to Dubinsky, “purported trades were recorded as being settled on weekends or holidays when the U.S. stock and option exchanges were closed and were also supposedly settled after the normal acceptable industry mandated time period of T+1 (for options) or T+3 (for equities)…”

T+1 is Wall Street lingo for trade date plus one business day; T+3 means that stock trades (equities) settle on the third business day after the trade date.

Dubinsky’s report shows that from 1995 to 2008, $4.6 billion in fictitious dividends were reported on client statements. The report reads:

“Dividends that were to be paid to the purported owners of securities on record were not paid to House 17 customers from actual corporate dividend distributions. Instead, they were paid with Other People’s Money. No records exist showing actual transfers of corporate dividend distributions to the House 17 bank accounts nor is there evidence of communication between House 17 and the transfer agents or corporations that would have disbursed the dividends.”

There was another red flag that a sharp-eyed investor or his accountant could have caught on the Madoff statements. According to Dubinsky, the sweep fund that idle cash was supposedly moving into according to the fraudulent statements was the Fidelity Spartan U.S. Treasury Money Market Fund. Madoff continued to reference that fund with that title on the account statements even though Fidelity had dropped the word “Spartan” from the title in 2005, another red flag that Fidelity’s computers were not talking to Madoff’s computers and that no such actual sweep fund existed.

In the past, there have been cases where brokers at large Wall Street firms diverted the customers actual statements to their own post office boxes and issued fraudulent statements akin to what Madoff was doing. To safeguard against that possibility, investors can directly call the back office of their investment firm once a year (not the local branch phone number) and ask to have a statement mailed directly to them while also checking that the address of record for the statements is their actual address.

While this might add a little cost to the brokerage firm, it is certainly less costly than the legal fees of defending against a rogue trader. 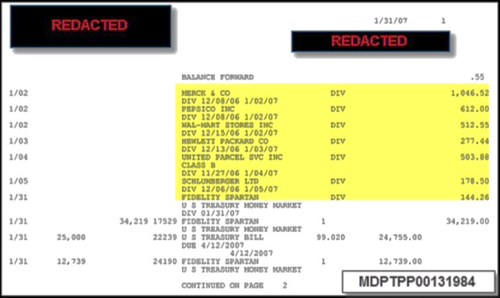