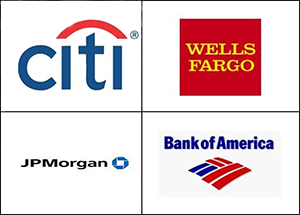 Before Wall Street took a bazooka loaded with credit default swaps and toxic mortgage securitizations and fired it directly at the heart of the U.S. economy, we had a very stable banking system. In the five years before the 2008 crash, only 10 banks failed in the United States. Let me repeat that: ten banks went belly up in the entire period between January 2003 through December 2007.

Since January 2008 through today, the Federal Deposit Insurance Corporation shows 487 banks have failed, with 22 failures just so far this year. With an average of two bank failures per year in the five years before the crash, that means banks are still failing at 10 times the pre-crash rate. But the numbers get worse from there.

While the FDIC shows 487 banks have failed, other data at the FDIC show that a total of 1,306 banks have disappeared since March 31, 2009, along with $1.5 trillion in deposits. The difference is that 819 banks or savings associations have merged, typically to survive. The missing deposits likely went to pay down debts, moved to uninsured money market funds, into the stock market or bond mutual funds to earn extra yield.

Now fast forward to June 30, 2013. According to FDIC data, the 8,246 banks and savings institutions have melted away to a new total of 6,940. Bank of America, JPMorgan Chase, Wells Fargo & Co. and Citigroup, now control a combined $3.511 trillion in domestic deposits, a stunning 58.8 percent of all 6,940 U.S. banks’ domestic deposits of $5.966 trillion. The market share of these four giants has increased by an astonishing 24 percent in just 4 years.

But it gets even worse. Each of these four banks that have cumulatively gained a 24 percent increase in market share are the same banks charged by the Federal regulators in swindle after swindle against the American public. As many have long suspected, this data conclusively proves that crime pays on Wall Street.

The reason we continue to see a dramatic decline in total numbers of banks and savings institutions is that the regulations imposed on the community banks because of the wrongdoing of the big banks, is forcing many to merge with larger banks to be able to afford the dramatic increase in compliance costs.

Thank you, once again, Wall Street, for reminding us what a lopsided playing field we have in the United States.