Congress Has Lost Control of the Big Banks 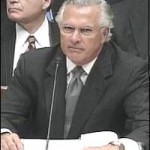 Richard Fisher, President of the Federal Reserve Bank of Dallas

On January 16 of this year, Richard Fisher, President of the Federal Reserve Bank of Dallas, delivered a speech on the continuing threat to the U.S. economy posed by the too-big-to-fail banks. Fisher said: “I submit that these institutions, as a result of their privileged status, exact an unfair tax upon the American people. Moreover, they interfere with the transmission of monetary policy and inhibit the advancement of our nation’s economic prosperity.”

As part of his talk, Fisher presented a chart showing the Frankenbank nature of the five largest banks in the U.S. – JPMorgan, Bank of America, Goldman Sachs, Citigroup, and Morgan Stanley. Cumulatively, these five banks are the parent to 19,654 subsidiaries or affiliates while their nondeposit liabilities total over $4.1 trillion – a figure equal to 26.3 percent of the Gross Domestic Product (GDP) of the country.

At the hearing, Timothy Weiner, Global Risk Manager of the giant beer brewer, MillerCoors LLC, told the Senate subcommittee that the largest U.S. banks had gained “effective control” of the London Metals Exchange (LME) and were using their cartel powers to hold up deliveries of aluminum and push up its price.

Weiner said: “…the aluminum we are purchasing is being held up in warehouses controlled and owned by U.S. bank holding companies, who are members of the LME, and set the rules for their own warehouses. These bank holding companies are slowing the load-out of physical aluminum from these warehouses to ensure that they receive increased rent for an extended period of time. Aluminum users like MillerCoors are being forced to wait in some cases over 18 months to take physical delivery due to the LME warehouse practices or pay the high physical premium to get aluminum today.”

Joshua Rosner, a Managing Director of the independent research firm, Graham Fisher & Company, also testified at the hearing, saying “We’re on the threshold of a new Gilded Age, where the fruits of all are enjoyed by a few.” Rosner put the blame squarely on the Federal Reserve for effectively rewriting the securities laws in 2003 by allowing Wall Street banks to take possession of physical commodities.

Yves Smith, writing on her web site, Naked Capitalism, last Friday, thinks the dial is being turned back much further than the Gilded Age – more like before the French and American revolutions. Smith wrote:

“It isn’t just that the economic rights for ordinary workers and the social safety nets of the New Deal and the earlier labor movements here and abroad are being demolished. Major elements of a broad social and political architecture that served as the foundation for the Industrial Revolution are being torn apart: the Statute of Fraud (essential to give people of every level of society decent protection of property rights) and access to legal remedies; basic protection of personal rights (habeas corpus, due process, protection against unlawful search and seizure); local policing (as in policing being accountable to local governments). Decent quality public education and the freedom of the press are also under assault. People here have used various terms for this new political order that is being put in place; neofeudalism works as well as any, but it looks intended to dial the clock back on many economic and civil rights of ordinary people, not back to the Gilded Age, but to before the French and American Revolutions.”

Smith is clearly on the right path in her thinking. Seven days after Senator Sherrod Brown had convened his hearing on the Wall Street commodity cartel, the chairs of the Securities and Exchange Commission (SEC) and Commodity Futures Trading Commission (CFTC) — Mary Jo White and Gary Gensler, respectively — appeared before the Senate Banking Committee in a hearing tragically miss titled, “Mitigating Systemic Risk in Financial Markets through Wall Street Reforms.” 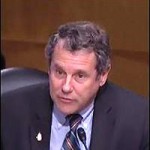 Senator Sherrod Brown was present and had this to say:

“We know as we heard in my subcommittee last week, that some banks own oil tankers and trade oil futures; others own energy transmission rights and sell energy derivatives; financial institutions in some cases control fleets of oil tankers and can withhold delivery while also wagering on the price of oil; or they can speculate on the price of energy while controlling its supply as we saw in today’s settlement between FERC [Federal Energy Regulatory Commission] and JPMorgan.”

Gensler of the CFTC answered that the CFTC had attempted to put position limits on what banks could wager in the commodities market with a formal ruling. He said a court had “vacated” the ruling and two Wall Street trade associations continue to challenge the ruling in court.

SEC Chair Mary Jo White said she had just recently learned about this issue. White came to the SEC in April via Wall Street’s magical revolving door to Washington where conflicts of interest are brushed aside as swiftly as a speck of lint. White chaired the litigation department at Debevoise & Plimpton in New York, where she led a team of more than 200 lawyers defending Wall Street’s too-big-to-fail banks.

In the spring of 2009, Illinois Senator Dick Durbin stated during an interview on a local radio show: “And the banks — hard to believe in a time when we’re facing a banking crisis that many of the banks created — are still the most powerful lobby on Capitol Hill. And they frankly own the place.”  A few months later, on the Bill Moyers’ PBS program, Durbin was asked about that remark. He said:  “It’s counterintuitive. The people who brought this crisis to us are the ones that are dictating policy.”

Today, it’s not just that Wall Street and its army of lobbyists and trade associations are dictating policy and going to court to hold sway over Washington, it’s also the fact that the Senate has confirmed deeply conflicted regulators who earned big bucks working for Wall Street and are likely to return to the same or similar jobs. Is it any wonder the public is seeing no meaningful reforms while watching the corruption grow exponentially.