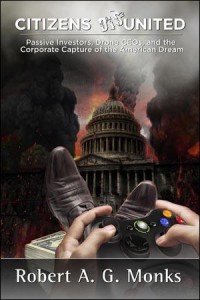 Robert A.G. Monks has written a very dangerous book, Citizens DisUnited: Passive Investors, Drone CEOs, and the Corporate Capture of the American Dream. Grab two copies of this book as fast as you can: put one out to sea in a watertight bottle for future archeologists to piece together the downfall of America; put another in a safe in your home. If things continue on the path we’re on, corporations will be rounding up books like this for bonfires.

Monks’ book is a serious threat to the status quo because there are only a handful of Americans who could so deftly unravel the corporate takeover and corruption of every device or institution available to the average citizen to have a meaningful voice in society. Monks builds his case, much as a skilled trial lawyer presents his evidence to the jury, but in an immensely readable style that, despite the subject matter, is often humorous.

Even for the scholar of this unprecedented era of systemic corruption, there will be many epiphanies and surprises.

Monks has been an activist for decades on corporate governance, or the lack thereof. He has written and testified widely. Together with well-known corporate governance expert, Nell Minow, he wrote Power and Accountability (Harper Business, 1991); Corporate Governance (Blackwell Publishing, 1995); and Watching the Watchers (Blackwell Publishers, 1996).

As the title suggests, the book is an indictment of the U.S. Supreme Court’s embrace of corporate dictatorship in its Citizens United decision which enshrined corporate personhood and removed barriers to corporations infusing vast sums into U.S. elections.

Monk writes: “…the defense of Citizens United offered by Justice Samuel Alito at a November 2012 meeting of the archconservative Federalist Society borders on the clinically obtuse or borderline deranged. ‘The question is whether speech that goes to the very heart of government should be limited to certain preferred corporations – namely, media corporations,’ Alito said. ‘Surely the idea that the First Amendment protects only certain privileged voices should be disturbing to anybody who believes in free speech.’ ”

I’m going with “borderline deranged” since there are few other options to explain why a U.S. Surpreme Court Justice cannot differentiate the role of the Fourth Estate from the tobacco, energy, Wall Street, et al, cabal that, in the name of profit, variously pollutes the lungs of children, our air and water, or in the case of Wall Street, pollutes and poisons representative government while plundering the savings of widows and orphans.

Monks is eloquent on the topic:

“Here is the political world the Supreme Court (or a 5-4 majority thereof) has bequeathed unto us. By granting corporations a political voice, by failing to restrain the resources to employ and enshrine its reach, and by simply shutting individuals of anything less than stupendous wealth out of the equation, the Court has effectively created a virtuous circle, but only for those inside it.”

Repeatedly, Monks warns of the insidiousness of the process that is lulling Americans into zombie-trance-like acceptance (my words, not his) of the hideous state of our democracy:

“One more sign of the ascendancy of influence peddling: the casualness with which so much of it goes on these days,” says Monks. “The Romney campaign on Wednesday evening of the 2012 Republican National Convention hosted its major donors – those who had given or raised $1 million or more – aboard the Cracker Bay, a 150-foot yacht owned by Florida developer Gary Morse. And as if to prove that in today’s America money talks but doesn’t have to listen, the Cracker Bay was flying not the stars and stripes of America, but the merchant flag of the Cayman Islands.”

According to Monks, ABC News caught wind of the event and reported that most attendees covered their name tags as they exited the yacht. Monks says, “The scene calls to mind not so much embarrassment as the way Mafia dons used to cover their faces with fedoras as they walked out of war councils.”

Monks notes the absolute silliness of the Supreme Court’s suggestion that shareholders of these mighty conglomerates with legions of law firms and lobbyists would be able to keep corporate governance in check. Monk writes about the continuing effort “by the Business Roundtable to muzzle proxy advisory services, particularly on compensation issues, and the parallel effort by Martin Lipton of the law firm of Wachtell, Lipton, Rosen & Katz to squelch the Harvard Law School’s Shareholder Rights Project, a small, clinical program focusing on basic abuses in corporate governance. When the lobbying arm representing the CEOs of many of the nation’s largest companies and the most highly paid legal defender of the autocratic rights of corporate manager-kings insist on using elephant guns to kill ants, you can be certain big money is at stake and the exercise of free speech lies in the balance.”

While a Republican himself, Monks was clearly no fan of Mitt Romney, as indicated by this passage: “And when companies like Bain Consulting reap untold millions in profits by using borrowed capital to buy companies, then sucking them dry, leaving the remains for bankruptcy referees to sort through, and stashing vast profits in offshore tax heavens, we celebrate the wonders of ‘creative destruction’ and nominate one of its primary architects for the highest office in the land.”

Monks reminds us of the spectacular abuses of corporate treasuries by these CEO manager- kings:

Jack Welch, CEO of GE received after retirement: “prime boxes at Yankee Stadium and Boston’s Fenway Park, courtside seating at Madison Square Garden for Knicks games, use of GE’s $80,000 per month Manhattan apartment, and so on. The real story, though, was the $420 million retirement package that Welch had carried away from GE…” Or AT&T’s Ed Whitacre who “was given $230 million to take a scamper after only two years on the job…” Then there was Viacom’s Thomas Freston who “put in all of nine months on the job before being given $100 million to vacate it – approximately $365,000 for every arduous day in the C-Suite.” The list of abuses go on and on.

The attitude of entitlement is on display even when it is widely acknowledged that the CEO essentially killed the corporation with an insane business model. Monks revisits the New York Post article headlined “Pigs Fly.” The headline was triggered by a story about Citigroup’s retired CEO, Sandy Weill, using a Citigroup corporate jet “to fly him gratis to a Mexican resort only weeks after U.S. taxpayers had shelled out $45 billion to rescue the financial institution he no longer headed…”

What has all this done for the average American worker? Monks delivers the indictment: “Prior to the 2007-08 financial crisis, corporate profits represented the largest share of national income since the start of World War II, while the share of those profits going to wages and salaries had sunk to the lowest level since the Great Crash of 1929.”

Without a constitutional amendment to repeal Citizens United, we are living in the permanent, corporate Gilded Age.