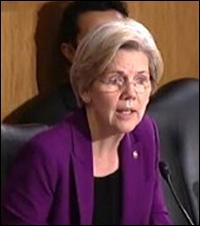 Wall Street regulators hauled before the Senate Banking panel yesterday were likely expecting compliments for their agreement on forcing big banks to boost capital. Instead, Senator Elizabeth Warren dropped a bombshell: she and three other Senators later yesterday were introducing legislation to restore the depression era Glass-Steagall Act. (The Senate co-sponsors were John McCain, Republican from Arizona, Maria Cantwell, a Washington Democrat, and Angus King, an Independent from Maine.)

As regulators from the Treasury, FDIC, Federal Reserve and Office of the Comptroller of the Currency stared back in silence, Senator Warren mapped out why the legislation was being introduced:

“…the four largest banks are now 30 percent larger than they were just five years ago and they have continued to engage in dangerous, high-risk practices. So, later today Mr. Chairman, Senators McCain, Cantwell, King and I will introduce a 21st Century Glass-Steagall Act. For half a century after the Great Depression, Glass-Steagall kept this country safe by separating the risky activities of investment banks from the basic checking and savings accounts that consumers rely on every day.

“The banks lobbied for weaker regulations and eventually the regulators started unraveling Glass-Steagall and finally in 1999 Congress repealed what was left of it. So now we propose a 21st Century Glass-Steagall so that we can return to the basics and try to keep the gamblers out of our banks.

“Now, based on what the regulators did to Glass-Steagall over the past 30 years, I don’t expect that anyone on this panel will jump up and endorse the new Glass-Steagall bill; even so, we’re going to keep pushing for it.”

The text of the new bill explains the long overdue need for re-implementing the Glass-Steagall Act:

“The Finanancial Crisis Inquiry Report issued by the Financial Crisis Inquiry Commission concluded that, in the years between the passage of Gramm-Leach-Bliley and the global financial crisis, ‘regulation and supervision of traditional banking had been weakened significantly, allowing commercial banks and thrifts to operate with fewer constraints and to engage in a wider range of financial activities, including activities in the shadow banking system.’ The Commission also concluded that ‘[t]his deregulation made the financial system especially vulnerable to the financial crisis and exacerbated its effects.’; …a report by the Financial Stability Oversight Council pursuant to section 123 of the Dodd-Frank Wall Street Reform and Consumer Protection Act states that increased complexity and diversity of financial activities at financial institutions may ‘shift institutions towards more risk-taking, increase the level of interconnectedness among financial firms, and therefore may increase systemic default risk. These potential costs may be exacerbated in cases where the market perceives diverse and complex financial institutions as ‘too big to fail,’ which may lead to excessive risk taking and concerns about moral hazard.’;

“…the Senate Permanent Subcommittee on Investigations report, ‘Wall Street and the Financial Crisis: Anatomy of a Financial Collapse,’ states that repeal of Glass-Steagall ‘made it more difficult for regulators to distinguish between activities intended to benefit customers versus the financial institution itself. The expanded set of financial services investment banks were allowed to offer also contributed to the multiple and significant conflicts of interest that arose between some investment banks and their clients during the financial crisis.’;

“…the Senate Permanent Subcommittee on Investigations report, ‘JPMorgan Chase Whale Trades: A Case History of Derivatives Risks and Abuses,’ describes how traders at JPMorgan Chase made risky bets using excess deposits that were partly insured by the Federal Government;

“…in Europe, the Vickers Independent Commission on Banking (for the United Kingdom) and the Liikanen Report (for the Euro area) have both found that there is no inherent reason to bundle ‘retail banking’ with ‘investment banking’ or other forms of relatively high risk securities trading, and European countries are set on a path of separating various activities that are currently bundled together in the business of banking;…”

The introduction of the legislation comes on the heels of a hearing in the House of Representatives on June 26 which made it clear that a growing chorus of financial veterans believe the financial system is anything but safe – despite years of talking about how Dodd-Frank would rein in the excesses.

Thomas Hoenig, former President of the Federal Reserve Bank of Kansas City and now Vice Chair of the FDIC, stated at the June 26 hearing that the biggest banks are “woefully undercapitalized” and that we have a “very vulnerable financial system.” Hoenig was a member of the Federal Reserve System’s Federal Open Market Committee from 1991 to 2011. Hoenig is also a strong advocate of restoring the Glass-Steagall Act.

Richard Fisher, President of the Federal Reserve Bank of Dallas, said on June 26: “I don’t think we have prevented taxpayer bailouts by Dodd-Frank” and added that the legislation “enmeshes us in hyper bureaucracy.”