NYU’s Gilded Age: Students Struggle With Debt While Vacation Homes Are Lavished on the University’s Elite

A review of deeds and mortgages in some of the toniest towns on the East Coast reveals that not only is New York University financing luxury Manhattan brownstones and high rise condos for its faculty and administrators out of its nonprofit coffers, it has also been secretly financing country homes for a select group. These extravagances have fallen directly on the shoulders of financially struggling students. NYU ranks fourth in Newsweek’s 2012 list of the least affordable colleges.

In September 2009, the New York Times published a remarkable exercise in inanity, profiling John Sexton, President of NYU, relaxing at his Fire Island beach house. Sexton calls his summer getaway a “rather large, wonderful house” in the interview. We learn what Sexton eats for breakfast (black coffee and yogurt), the name of his dog (Legs), how long it takes him to walk to church from the ferry (five minutes), how much weight he’s lost (30 pounds), and little else.

We don’t, for example, learn from the interview that his home on Fire Island has been financed since 1994 by several million dollars in loans from the NYU School of Law Foundation and NYU itself, according to the Suffolk County Clerk’s records.

This is not the only residence that NYU has made possible for its President. He has the use of two well appointed apartments owned by NYU in Manhattan. Sexton, who turned 70 in September, is also set to receive a length of service bonus of $2.5 million in 2015 and an annual pension of $800,000 when he retires. That pension is the equivalent of NYU taking $10 million of its assets and placing them in an immediate annuity for Sexton. 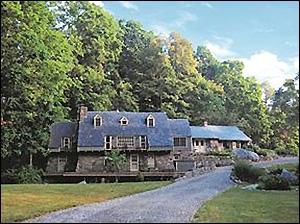 Richard Tsien, Director of the NYU Neuroscience Institute, Bought This Country Manor in East Fishkill With Financing From NYU

Sexton has plenty of company when it comes to getting out of the city in the summer through the generosity of NYU. Richard Tsien, Director of the NYU Neuroscience Institute, bought a house in East Fishkill, New York, 76 miles from the university, for $1,125,000 in February 2012 with $500,000 in financing from NYU. According to an online description, it’s a stone house on 7 park-like acres with a flowing stream and a functioning 12-foot water wheel.

Numerous other NYU professors have country homes financed by the NYU School of Law Foundation or NYU. Between primary residences and vacation homes, NYU and its affiliated nonprofits have an estimated $72 million to $96 million outstanding in loans to faculty and administrators. The university has acknowledged 168 loans.

These revelations come on top of other recent outrages at the university, such as the purchase of a $6.15 million condo on East 70th Street to house Robert Grossman, Dean of the NYU Medical Center. Grossman’s combined compensation at NYU as of the fiscal year ending August 31, 2011 was $3,488,960. Five other doctors at the Medical Center receive a combined total of $10.5 million in compensation.

The excesses at NYU under the presidency of John Sexton came partially to light during the Senate confirmation hearings of Jack Lew, President Obama’s pick for Treasury Secretary. As NYU’s Chief Operating Officer, Lew had received a partially forgivable mortgage loan for $1.4 million to buy a luxury home in Riverdale and “severance pay” of $685,000 – even though he had voluntarily left to join Citigroup. In testimony to the Senate, Lew said NYU provided him with an annual payment equal to the interest paid on his mortgage.

Senator Chuck Grassley, ranking member of the Committee on the Judiciary, was part of Lew’s confirmation hearings and was deeply disturbed by Lew’s opaque and grudging release of the materials requested. As a result of what he had heard in the hearing, Grassley sent a March 15, 2013 letter to NYU requesting “all loan documents for loans made to individuals from 2000 to the present,” along with a demand to know the details about whose loans were forgiven, interest reimbursed, and so forth.

It’s now three months later and according to a spokesperson for Grassley, his office still doesn’t  have all the loan documents. NYU is refusing to turn over the documents, instead forcing Grassley’s aides to look at the documents in the presence of NYU lawyers and “take notes but not make copies of the documents.” The next session is scheduled for June 27, according to the spokesperson. Grassley is a Republican. Because the Democrats have majority control in the Senate, Grassley lacks subpoena power.

The NYU chapter of the American Association of University Professors has asked the New York State Attorney General’s Charities Bureau, which oversees nonprofit organizations, to probe the mushrooming mortgage scandal and other matters. The faculty at a number of schools on the campus have delivered a no-confidence vote of Sexton, with particular ire arising from his NYU 2031 plan to broadly expand NYU’s real estate footprint in Greenwich Village with vast construction projects earmarked that would disrupt neighborhood life and cost the university billions of dollars. NYU is already the second largest real estate owner in New York City, with $3.3 billion in residential and commercial holdings according to its 2010 federal tax return.

I emailed one Law Professor, Geoffrey Miller, who had a home in New Rochelle financed by the NYU School of Law Foundation, and asked why he didn’t simply use the NYU Federal Credit Union, as many other faculty have done to finance their homes. The Credit Union’s web site indicates that it offers a “full range” of home mortgage loans in New York, New Jersey, Connecticut, New Hampshire, Pennsylvania and Vermont, up to a cap of $750,000. I also asked Miller if his loan was forgivable. Miller responded that he wouldn’t provide “personal financial information” over the internet. Of course, I wasn’t asking for sensitive things like account numbers or social security numbers or even dollar amounts. I was asking two very basic questions: why didn’t you use the Credit Union and was your loan forgivable.

I reached out to NYU to justify these loans under IRS rules for 501(c)(3) nonprofit organizations, the structure under which both NYU and the School of Law Foundation are organized. One rule is quite specific, warning that 501(c)(3)s “must not be organized or operated for the benefit of private interests, and no part of a section 501(c)(3) organization’s net earnings may inure to the benefit of any private shareholder or individual.”

NYU spokesman, John Beckman, responded: “NYU is located in the highest cost-of-living area in the country. NYU loan programs are one part of strategy that has transformed New York University over the last several decades from a regional, largely commuter, school to one of the top ranked research universities in the world.  A core tenet of the transformation was to create a cohesive, residential academic community of faculty, students, and administrators committed to and interacting in university life, including academic and extracurricular activities (and, in the case of senior administrators, where they can be available around the clock).”

But that doesn’t explain Sexton’s home 57 miles from Manhattan or Tsien’s home an hour and a half away or any of the other country homes far outside of New York City. If anything, it’s an argument against the ability to have senior administrators “available around the clock.” (Not that this is an acceptable practice under any circumstance.)

Beckman continued on the matter of country homes: “NYU loan programs, while primarily targeted for the purchase of principal residences accessible to campus, also can assist in meeting other financial needs of the accomplished faculty and senior administrators that NYU seeks to recruit and retain in a highly competitive market for such talent.  NYU’s peer institutions typically also have loan programs and other housing assistance programs for faculty and senior administrators. For these reasons, NYU’s loans are directly related to NYU’s exempt purposes.”

One detail on NYU’s 2010 federal tax filing raises further red flags.  A little footnote reads as follows: “One highest compensated employee received compensation over a base salary based on the surplus of revenues after expenses for the IVF Faculty Practice Group.” That would seem to be in direct conflict with the IRS ruling that “no part of a section 501(c)(3) organization’s net earnings may inure to the benefit of any private shareholder or individual.”

IVF refers to in vitro fertilization, available through the NYU Medical Center’s Fertility Center. Two individuals appearing on NYU’s highest compensated individuals’ listing on the 2010 tax filing for NYU are Dr. Jamie Grifo, listed as earning $2.9 million, and Dr. Nicole Noyes, listed at $1.8 million. Both are listed as employees of the Fertility Center on its web site.

One person who is not getting financing from NYU for a country home, a city home or a multi million dollar salary is Chen Guangcheng, a blind human rights activist and lawyer who has been a fellow at NYU for the past year. Chen had escaped house arrest in China and fled to the U.S. Embassy in Beijing before arriving at NYU.

Chen released a statement Sunday night, saying he was getting the boot at NYU because of pressure from the government in China. Since the New York Post ran an article to that effect last Thursday, NYU has vehemently denied the accusation.  NYU plans to open a campus in Shanghai this fall, a plan that requires the goodwill of Chinese officials. The plan has caused great controversy at NYU because of ongoing human rights abuses by the totalitarian government there. NYU’s campus in autocratic Abu Dhabi is equally contentious, with faculty charging that NYU is simply selling its brand abroad in exchange for big donations.

The problems at NYU are emblematic of an insular institution whose Board is heavily dominated by the same Wall Street people who heaped disgrace upon their own institutions. The NYU Association of American University Professors has proposed a broad new blueprint for governance at NYU. It includes faculty and student representation on the Board of Trustees, participation in selecting new presidents and provosts, the ability of faculty to have a say in any domestic or global expansion plans, and a full knowledge of the university’s fiscal affairs. When John Sexton returns from Fire Island and meets with the Board, adopting the new management model should be the first order of business.