MF Global and Wall Street: Whose Job Is It To Take the Keys Away 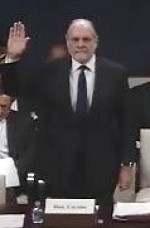 The day after the U.S. House of Representatives’ Financial Services Committee held a hearing on why their seminal financial reform legislation, Dodd-Frank, is a bureaucratic boondoggle that will not prevent another taxpayer bailout of Wall Street in the event of a systemic collapse, we learn just how vulnerable the system is to powerful men allowed to play with other people’s money.

Yesterday, the Commodity Futures Trading Commission (CFTC) brought charges in Federal Court against MF Global, its former CEO, Jon Corzine, and its former Assistant Treasurer, Edith O’Brien. Corzine is a former U.S. Senator and Governor of New Jersey. The two are charged with the unlawful allocation of customer money at the commodities trading firm. The company has agreed to settle the charges against the firm for $100 million. The claims remain outstanding against the individuals.

MFGlobal collapsed in October 2011. Corzine had directed the firm to use its capital to make large bets on European sovereign debt. When the firm collapsed, over $1 billion of client funds were missing.

Trading firms routinely record phone conversations to be able to reconstruct any disputed trades. In one such conversation revealed in the CFTC’s lawsuit against Corzine and O’Brien, the Global Treasurer states: “We have to tell Jon that enough is enough. We need to take the keys away from him.”

What does it take to convince Congress that Dodd-Frank financial reform legislation isn’t working. Does it take another MF Global. Or another Peregrine Financial Group. Or another JPMorgan London Whale debacle. Or a systemic collapse of the financial system as occurred in 2008. 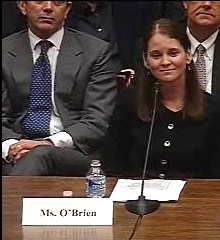 Dodd-Frank legislation was passed in 2010. And yet, in 2012, JPMorgan Chase, the largest bank in the United States by assets, was using its bank depositors’ money to make huge gambles in London on thinly traded derivatives. It lost at least $6.2 billion of depositors’ money on those bets. It too has a powerful CEO sitting at the helm – Jamie Dimon. Is it the job of some salaried employee who needs his family’s health insurance and income to pay his mortgage to take the keys away from Jamie Dimon or is it the responsibility of Congress to take the depositors’ insured deposits, backstopped by the U.S. taxpayer, away from casinos.

MF Global and Peregrine Financial were small enough trading firms that they did not pose a systemic risk to the U.S. financial system when they failed. But as Thomas Hoenig, Vice Chair of the FDIC, told Congress this week, “The largest eight U.S. global systemically important financial institutions in tandem hold $10 trillion of assets under GAAP accounting, or the equivalent of two-thirds of U.S. GDP, and $16 trillion of assets when including the gross fair value of derivatives, which is the equivalent of 100 percent of GDP.”

It’s time for Congress to take the keys away by restoring the Glass-Steagall Act and removing insured deposits from the grip of powerful men sitting at the helm of trading firms.