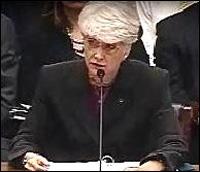 Julie Williams, Chief Counsel, Office of the Comptroller of the Currency, Testifying Before the House of Representatives on July 7, 2011

Last evening, the U.S. Senate’s Subcommittee on Financial Institutions and Consumer Protection, part of the Senate Banking Committee, announced the details of its much anticipated hearing slated for next Thursday, April 11, to peel away the multi layers of darkness surrounding the government’s hastily scrapped plan for in-depth, “independent” reviews of bank foreclosure files that were to make victims of foreclosure abuse whole.

The Senate Subcommittee, which includes Elizabeth Warren, Sherrod Brown, and Jeff Merkley – who have sufficiently removed their rose-colored glasses regarding continuing Wall Street corruption to function as useful investigators – will focus on the role of the outside consultants that were hired and paid directly by banks to conduct what were promised to be unbiased reviews.

If Warren, Brown and Merkley do their job properly, the hearing has the potential to showcase the fact that cronyism, conflicts of interest and the Washington/Wall Street nexus of corruption is alive and well, even after bringing the country to the brink of economic collapse just five short years ago. Accomplishing that feat is critical to getting real financial reform back on the legislative agenda.

One essential witness that needs to make an appearance is Julie Williams, the former Chief Counsel of the Office of the Comptroller of the Currency who stepped down on September 30, 2012 and in less than four months became a managing director of a consulting firm created by her former boss at the OCC, Eugene Ludwig, who headed the agency from 1993 to 1998. The OCC is the top regulator of all national banks, including those of the too-big-to-fail variety and has a history of cronyism. For example, John Dugan, who headed the OCC from 2005 to 2010, covering the worst years of the financial crisis, was previously a registered bank lobbyist. He returned to the same law firm from which he came, Covington & Burling, where he chairs the firm’s Financial Institutions Group – advising the same institutions he previously regulated.

Williams needs to be queried by the Senators on how the firm of her former boss, Promontory Financial Group LLC, where she landed a plum post this January, ended up with multiple lucrative contracts to perform the “independent” foreclosure reviews under a plan created by her agency and the Fed. (Mary Schapiro, who recently stepped down as Chair of the SEC, has also just joined Promontory as a managing director.)

In testimony to a joint hearing of the House Subcommittee on Financial Institutions and Consumer Credit and Subcommittee on Oversight and Investigations (both part of the House Committee on Financial Services) on July 7, 2011, Williams promised that the plan created under the Cease and Desist orders with banks would provide “real reform to restore integrity to the foreclosure process,” adding that “The OCC will oversee this process to ensure that the look-back process is conducted in an independent manner.”

Williams elaborated as follows in that testimony:

“One of the more significant aspects of the Orders are the ‘look-back’ provisions, which require a comprehensive, independent review of foreclosure actions for borrowers who completed, or were in the process of, a foreclosure during the period of January 1, 2009 through December 31, 2010 (‘in-scope borrowers’). The look-back requires mortgage servicers to identify those borrowers that suffered financial harm as a result of foreclosure processing deficiencies and to compensate them for financial injury. This is an open-ended obligation, with no dollar cap, and the OCC is supervising compliance with the foreclosure review very closely…”

Instead of restoring integrity as Williams promised, the process developed a strong stench, as we previously reported. Below is an excerpt of our earlier report:

“The speciousness of the original OCC plan has been challenged by the General Accountability Office, ProPublica, and a host of consumer advocates. The GAO found that the letters sent to borrowers who may have been wronged in the foreclosure process were written over their heads and failed to mention any specific dollar amounts they might be entitled to – thus removing the incentive to wade through the legalese. ProPublica found that in at least one case, that of Bank of America, ‘supposedly independent, third-party reviewers would sit at a computer, analyzing each homeowner’s case by going through hundreds of questions, such as whether the bank had properly reviewed a homeowner for a modification or had charged bogus fees. But the reviewers weren’t starting from a blank slate. Bank of America employees had already supplied the answers, which the reviewers would have to override if they did not agree.'”

In a January 10, 2013 article by Jessica Silver-Greenberg at the New York Times, more information about the conflicted process emerged:

“A critical flaw from the start was that the federal government farmed out the work of scouring the millions of foreclosures to several consulting firms that charged as much as $250 an hour and outsourced work to contract employees, many of whom had no experience reviewing mortgages, according to the reviewers, regulators and bankers.

“Oversight by the regulators was nearly nonexistent, the reviewers said. Some employees hired by one of the consultants, Promontory Financial, to pore over hundreds of thousands of Bank of America foreclosures said that without a watchdog some consultants worked to minimize the number of homeowners found to be harmed. One reviewer described how her supervisors routinely kicked back loans where she had identified harm. The reviewers would speak only if they were not named because they were searching for work.”

It has been widely reported that outside consultants hired under the plan have been paid over $2 billion thus far.

The Independent Foreclosure Review process was abruptly halted on January 7 of this year with the announcement that 10 of the banks involved, including four of the largest — JPMorgan Chase, Citigroup, Bank of America and Wells Fargo – were settling with regulators for $8.5 billion. At the time, the OCC said in a statement that the $8.5 billion “includes $3.3 billion in direct payments to eligible borrowers and $5.2 billion in other assistance, such as loan modifications and forgiveness of deficiency judgments.”

The OCC issued an update on February 28, 2013, noting that the number of settling banks now totaled 13 and the pot of restitution had grown to $9.3 billion, broken down as “$3.6 billion in cash payments and $5.7 billion in other assistance to borrowers such as loan modifications and forgiveness of deficiency judgments.” Settling banks consisted of: Aurora, Bank of America, Citibank, Goldman Sachs, HSBC, JPMorgan Chase, MetLife Bank, Morgan Stanley, PNC, Sovereign, SunTrust, U.S. Bank, and Wells Fargo.

Yesterday, the same day the Senate announced the details of its April 11 hearing on the use of outside consultants for the foreclosure reviews, the General Accountability Office (GAO) released its second report on how the reviews were conducted. If the Senate investigators were hoping for some meaningful help from GAO, they were surely disappointed. The report was a garbled mish-mash focusing not on the conflicts of the outside consultants but the Byzantine methodology for determining if harm had occurred.

There are four words in the Wall Street lexicon of Congress and regulators that need to be surgically removed from their memory banks: “best practices” and “lessons learned.” These words might be suitable for reigning in roughhousing on elementary school playgrounds but they’re silly buffoonery when it comes to describing a decade long criminal binge of looting and plundering by Wall Street banks.

This Mary Poppins approach to coaxing criminals to play by the rules with a teaspoon of sugar was symbolized in the title of the GAO report: Foreclosure Review: Lessons Learned Could Enhance Continuing Reviews and Activities Under Amended Consent Orders.

This time last year, on April 24, the U.S. Senate was continuing to delude itself that reforming Wall Street simply required learning lessons. On that date it rolled out a hearing titled: “The Collapse of MF Global: Lessons Learned and Policy Implications.”

Can Warren, Brown and Merkley break through this Cat in the Hat naiveté when it comes to Wall Street’s systemic corruption? We’ll be watching closely next Thursday.