Progressives Rage Outside the White House Over Plan to Cut Social Security: Is This the Birth of a New Third Party

Senator Bernie Sanders Speaks at an April 9, 2013 Protest Outside the White House Over the President's Plan to Cut Social Security Benefits.

In what is likely an historical first for a Democratic President, groups that were his most loyal and hardworking supporters during last year’s campaign massed outside the White House yesterday to pronounce the President a traitor to his people and his party.

Just five months after spending millions from their campaign war chests and an equal amount of volunteer hours, the progressive groups who delivered a second term to Barack Obama feel betrayed. Using unusually harsh language and delivering 2.3 million signed petitions, the President’s base came to warn Congressional Democrats against falling in lockstep with the President.

The uproar comes over the President’s plan, to be unveiled today in his budget proposal, to cut Social Security payments by indexing benefits to a chained Consumer Price Index (CPI), a process viewed as a rigged system of reducing payments over time to the Nation’s most vulnerable seniors, veterans and disabled. Under chained CPI indexing, it is estimated that a Social Security recipient could receive $1,000 less annually after 20 years.

A group that has typically had blinders on when it came to Obama, the National Organization for Women, delivered some of the harshest words. Speaking at the protest, Now President Terry O’Neill said that under the President’s plan women would be “swindled yet again.” O’Neill characterized the President’s motive as “either a highly cynical move to bargain with right-wing legislators or a willfully misguided move to undermine our Social Security system.” The word “deceitful” was also invoked by O’Neill:

“Because of the wage gap, and time taken out of the paid workforce for caregiving, hardworking women retire with less money than men — often with no savings or investments to sustain them other than Social Security. Those who say the chained CPI won’t make much of an impact are either hopelessly dense or just plain deceitful… Let’s face it: instituting the chained CPI is like tripping someone at the end of a race after forcing them to run on the outside lane the whole way,” said O’Neill.

Many of the groups made outright threats to work to defeat in their reelection campaigns any Democrat who votes in favor of the Social Security cuts. Damon Silvers, Policy Director at the AFL-CIO who sent members a strongly worded email on Saturday, said at the protest that “if that’s your agenda, there will be no cover.”

Stephanie Taylor, co-founder of the Progressive Change Campaign Committee (www.boldprogressives.org) was at the protest and said one of their members had $3.71 left in his checking account after paying his bills last month. Taylor sent a chilling message to the President and his party:

“President Obama, it is morally wrong to take from our parents and our grandparents and our veterans. This is a crossroads moment for the Democratic party – you can’t call yourself a Democrat and support cuts to Social Security benefits…Over 1,000 of our members have said that they will challenge anyone who votes for Social Security benefit cuts, Republicans or Democrats.”

Bernie Sanders, who has consistently stood up to the President’s many sellouts to Wall Street, spoke at the protest, saying: “When one out of four major profitable corporations pays nothing in federal income tax, we know how we can deal with deficit reduction in a way that is fair.”

Jim Dean, Chair of Democracy for America, which has over a million members, called the plan “shameful” and said “Real Democrats do not cut Social Security, Medicare or Medicaid. Period.” Dean added that “the era of triangulation is over,” and promised that any Democrat who votes for this plan will face a primary challenge when they run for reelection. “For the Democrats in Congress who have not made up their minds yet, you are either with us, or you are against us,” Dean said forcefully.

Manny Herrmann, from MoveOn.org, spoke at the protest on behalf of the organization’s 8 million members. “MoveOn members worked long and hard last November to elect Barack Obama,” said Herrmann, “and they had the understanding that he would work to protect Social Security and Medicare. But now, President Obama is considering proposing cuts to these vital programs. Under the President’s new plan, a typical 80 year old woman would lose the equivalent of three months worth of food every year. That’s outrageous. It’s unconscionable and MoveOn members won’t stand for it. We will make sure members of Congress, Democrat or Republican, who vote for this proposal are held accountable. And for Democrats, we have a special message: MoveOn members have a long record of mobilizing in Democratic primaries. The way we see it, any Democrat who votes to cut Social Security, Medicare or Medicaid benefits is asking for a primary challenge. Just as we fought and defeated President Bush’s plan to privatize Social Security, our 8 million members will mobilize to fight and defeat these cuts. We will not stand by and watch a Democratic President chip away at one of the most successful government programs of all time.”

Max Richtman, President of the National Committee to Preserve Social Security and Medicare said that “Contrary to the political spin, America’s seniors know this chained CPI proposal isn’t a ‘tweak’ or an ‘adjustment.’ It’s not more accurate for seniors but it is designed to cut benefits and raise taxes, largely on the poor and middle class. Any politician in Washington who thinks they can slip these benefit cuts by millions of seniors, veterans, people with disabilities and their families unnoticed is in for the shock of their careers.”

Two other groups at the protest were Social Security Works and Campaign for America’s Future.

It was as hot as a summer’s day in the Capital yesterday, but this lively protest delivered a cool, fresh breeze to the status quo of beltway politics. The question is, will the President listen? 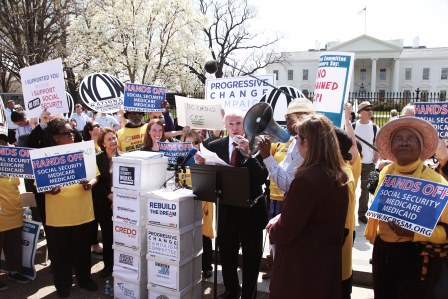 Max Richtman, President of the National Committee to Preserve Social Security and Medicare, Speaking at the Protest on April 9, 2013 Outside the Whitehouse