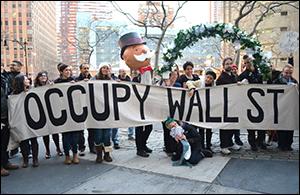 This Wednesday is May Day, the day that labor traditionally gives its state of the union address – not in the lobbyist filled chambers of Congress but in the homeless filled streets of the richest 1 percent on earth.

Thanks to the Occupy Wall Street movement (that growing, ever-evolving movement that corporate media keeps telling us is dead) there will be coast to coast marches, rallies, protests and street theatre. Other countries will be participating as well.

As with last year’s May Day rallies, the demands for change are broad-based, covering immigration, a living wage, the environment, Wall Street’s continuing unbridled greed, the corporate theft of elections, and the growing wealth and income gap in America and around the world.

Below is a tiny sampling of activities planned in New York City and elsewhere:

May Day Student Convergence: Students from Cooper Union, the New School, CUNY Graduate Center, Medgar Evers, New York University, Queens College, Columbia and Bard will meet up at various points around the city and then converge with labor groups for a speak out at 3:00 p.m. in front of Cooper Union. A 9 p.m. dance party will take place at a to-be-announced location.

A group calling themselves Love Bombs Seed Bombs aims to “restore lost coastal ecology by replanting native species.” They’ve created “seed bombs” of local natives and wildflower species with the help of the Lower East Side Girls Club and will be distributing them through the May Day activities. The idea is to help restore ecology that was lost during Hurricane Sandy. The cute little bombs (that look like bonbons) can be picked up at 3 p.m. at Battery Park or at 4 p.m. at Union Square at the May Pole.

The popular Occupy Guitarmy, made possible by the Occupy Wall Street Music Working Group, promises a roster of new rally songs this year. They will meet at 10 a.m. in Bryant Park by the Gertrude Stein statue for a rehearsal. At 12 noon, they will join the Immigrant Worker Justice Tour at Bryant Park and surrounding neighborhood. From 3 to 4 p.m., there will be singing at the Occupy Wall Street May Day pole in Union Square and on the rally stage. They will join the Unity March down Broadway to City Hall later in the afternoon and open the People’s Assembly at 7 p.m. with song.

99 Pickets May 1 Solidarity Swarm will gather at 2:30 p.m. in Union Square’s southwest corner by the Gandhi statue and then march from 3 to 4:30 p.m. on employers that are being targeted in ongoing labor campaigns to demand fair pay and worker justice.

The popular and creative People’s Puppets of Occupy Wall Street has a full day action plan with an uptown segment meeting in Bryant Park at 10 a.m. and a downtown group assembling in Union Square’s North Plaza at 11:00 a.m. The uptowners will take the Lady Liberty Puppet and a new debut, the Lady Justice Puppet, on planned marches including the Young Workers March with the Transit Workers Union to the offices of union busters and an Immigrant Justice Worker Tour beginning at 12 noon in Bryant Park.

The downtowners will have iconic union rat puppets on hand for the 2:30 p.m. Solidarity Swarm March that will leave from Union Square.

The full scale Occupy Wall Street march will commence at 5:15 at Union Square and head down Broadway to a rally in front of City Hall. Starting at 5:30 pm outside City Hall, there will be entertainment and music with a formal program from 6 to 7:30 p.m. focusing on the anti-labor policies of the Bloomberg administration.

Elsewhere around the nation, Occupy Los Angeles is calling for everyone to “Meet at Pershing Square at 2 P.M.” and will demand full legalization for immigrants. There will also be actions by neighboring  Occupy San Fernando Valley and Occupy Venice Beach.

Occupy Oakland will be targeting abuses by fast food employers. The organization says that “Last year Burger King made $117,000,000 in profits.” The group is joining with New York City and Chicago fast food workers in demanding $15 hourly wages.

Occupy Oakland will gather at Oscar Grant Plaza at 14th Street and Broadway for a rally at 5 p.m. followed by a noise demo march throughout downtown Oakland at 6 p.m. Food will be served at the rally and also after the march at the Plaza.

Occupy Oakland’s position is that the cost of renting apartments has been driven skyward by gentrification, while rising childcare, healthcare and food costs make it impossible to survive on the $8 hourly wages the food workers currently receive.

Occupy Chicago May Day Schedule of Events include a 10 a.m. Anti-Capitalist Demo at City Front Plaza; a 12:45 to 2:00 p.m. Occupy Chicago May Day Solidarity Speak Out at Union Park, at Randolph and Ashland; a 2 to 4:30 p.m. International Workers Day March for Immigration Reform at Union Park; a march to Federal Plaza beginning at 3: 00 p.m. with a rally at Federal Plaza at 4:30 p.m.

Occupy London has already achieved one goal for its May Day protest. The group says the company, EDF Energy, that was to be targeted on May Day, has backed down and cancelled its annual “Talk Power”conference “after being warned by police that May 1 is a traditional day of protest, therefore an unsuitable date for dirty energy corporations to party in the city.”

One commenter provided this background in a Letter to the Editor at the Guardian UK newspaper: “I want to express my gratitude to EDF for their decision to take out a civil lawsuit against protesters who occupied the first of 40 proposed new gas-fired plants in the coalition government’s reckless dash for gas… This lawsuit, its threat to our precious right to civil disobedience and EDF’s plans to massively expand fossil fuel infrastructure is exactly the shot in the arm that the climate action movement needed to mobilise in multitudes once more.”