Senate Censors Part of Report on JPMorgan About Its Stock Trading

The 307-page report the Senate released last Thursday on JPMorgan’s cowboy culture was deeply unsettling; the testimony under oath at the related Senate hearing on Friday was equally shocking with eyewitness accounts confirming that CEO Jamie Dimon ordered the withholding of  financial data to a regulator while both he and the Chief Financial Officer at the time, Douglas Braunstein, presented an Alice in Wonderland version of facts to the public in April 2012.

But it now appears that the worst of this story may be so unsettling to the markets and the public perception of Wall Street that it must be censored from public viewing. Throughout the Senate Permanent Subcommittee on Investigation’s 98 exhibits of emails and internal memos on the wild trading schemes at JPMorgan, the word “Redacted” appears.  In a high number of the areas where the material is censored, it concerns trading in the stock market, not the credit market where Bruno Iksil, the trader known as the London Whale, was causing giant ripples and eventual mega losses for the largest bank in the U.S. To date, there has been no media attention to the issue of stock trading within the Chief Investment Office nor has the issue been raised by investigators.

That the words equity trading (meaning stock trading) appear at all in this investigative report raises more serious red flags for JPMorgan. As Wall Street on Parade has repeatedly reported, the Chief Investment Office at JPMorgan, which oversaw the London Whale trades, was using insured deposits of the bank to place its casino bets. Senator Carl Levin, Chairman of the Senate Permanent Committee on Investigations, confirmed on Friday that JPMorgan used insured deposits as well as funds corporations had placed on deposit. That’s clearly not compatible with the Nation’s safety and soundness rules for banks and likely explains why the FBI is involved in an investigation.

To date, Jamie Dimon has attempted to present the giant bets in the credit markets as a hedging operation to offset risks in the company’s overall balance sheet. The credibility of that stance has lost its luster as Levin revealed that the Chief Investment Office in the first quarter of last year had actually taken on more exposure to credit risk rather than hedging it.

The reason for the existence of banks is to make business loans to help grow new industries, jobs and the economy. If one genuinely wants to hedge that risk, as opposed to gambling for the house with proprietary bets, a credible hedge would be to short corporate loan exposure – not buy more of the same exposure. But that is what the Chief Investment Office did – it purchased billions of additional exposure via an illiquid credit index from which it could not untangle itself.

The $6.2 billion in losses thus far acknowledged by JPMorgan from the trading of credit derivatives within the Chief Investment Office is bad enough. But trading stocks with customers’ savings deposits – that truly has the ring of the excesses of 1929 and inexplicable to explain as a hedge against the corporate loans made by the bank.

Although the “Redacted” stamp has censored much of the relevant information on this stock trading, a few snippets can be pieced together. We learn, for example, that the original budget proposed for stock trading in 2006 was twice that for credit trading. The plan was to trade a maximum of $5 million in credit derivatives and $10 million in stock trading – the specific type of stock transactions have been redacted from the document while those for credit trading have been left in. Since the notionals (face amount) of the credit derivatives eventually grew to hundreds of billions of dollars by early 2012, one has to wonder what the stock-related trading grew to from a proposed $10 million since it was originally slated to be twice as large as credit trading.

Another item that slips through is that “ETFs will also be treated as trading instruments.” ETF is an acronym for “Exchange Traded Fund,” portfolios of stocks that trade on stock exchanges. In a memo dated May 5, 2006 to Jason Hughes at JPMorgan from Roger J. Cole in the Compliance Department, we learn that there is a plan to trade stock market indices. The caveat is given by Cole that: “…compliance approval required before trading in credit/equity indices with less than 20 names as we discussed.”

The American public has already suffered the brunt of being kept in the dark on Wall Street’s nefarious operations leading to the collapse in 2008. The Senate needs to release the redacted material and let some disinfecting sunshine in. 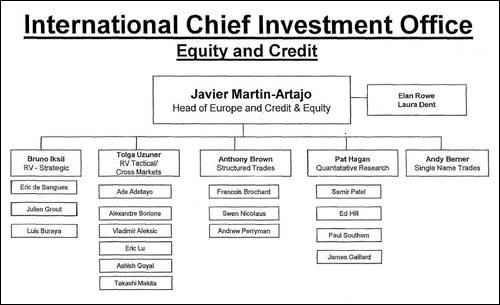