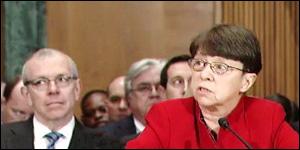 Despite all the corporate media headlines that Mary Jo White would sail through her confirmation vote before the Senate Banking Committee on Tuesday, what actually happened stands in stark contrast to the prognostications. White was not approved for a full four-year term at the SEC. She was confirmed simply to finish out the remaining 14-month term of former SEC Chair Mary Schapiro’s term.

But when the Senate Banking Committee met in Executive Session on Tuesday, March 19, 2013, there was no mention of voting on White for the four year term. The roll was called on a vote to confirm White for a term ending on June 5, 2014. On that vote, White  received 21 Yeas (including Senator Elizabeth Warren who has styled herself a champion of the people) and one No vote from Senator Sherrod Brown.

This sleight of hand is highly relevant to those hoping to place regulators with teeth overseeing Wall Street. The conflicts of White, a law partner at one of Wall Street’s favorite go-to firms, Debevoise & Plimpton, and those of her husband, John White, also a partner at a Wall Street law firm, are legion. Between White and her husband, they represent every too-big-to-fail firm on Wall Street. (Under ethics laws for members of the Executive branch, the conflicts of interest of White’s spouse become her conflicts of interest. And he will remain in his job.)

Even if Mary Jo White is retiring from representing Wall Street clients, what happens when she sits down for dinner with her husband, John White, who continues to represent Wall Street clients. Does she say: “Oh by the way, honey, I’m sorry I had to prosecute your best client today; the one that provides a big part of your billable hours.” How does John White explain to his colleagues at his law firm that his wife is prosecuting their biggest revenue clients. Why would Mary Jo White, who earns a huge salary at her law firm, want to be put in that position in order to head the SEC?

How does Mary Jo White flip on a dime from representing JPMorgan in a privileged attorney-client relationship and approve rules that would curtail JPMorgan’s big profit centers in making proprietary bets – high stakes gambles for the house.

Other than 21 Senators on the Senate Banking Committee, what thinking person in America believes those are conflicts that can be overcome.

In placing his No vote, Senator Sherrod Brown said:

“At a time when our Attorney General says that the biggest Wall Street banks are in many ways above the law and the SEC is blocking shareholders’ efforts to break up the banks that they own, we need regulators who will fight every day for taxpayers, Main Street investors, and retirees. But too often we have seen public servants who settle for the status quo, instead of demanding accountability.

“I don’t question Mary Jo White’s integrity or skill as an attorney. But I do question Washington’s long-held bias towards Wall Street and its inability to find watchdogs outside of the very industry that they are meant to police. Mary Jo White will have plenty of opportunities to prove me wrong. I hope she will.”

President Obama succeeded in two election campaigns on the promise of hope and change. When it comes to Wall Street, we’ve seen how that’s worked out. The corruption is getting worse and the prosecutions scarce. Senator Warren and the rest of her colleagues on the Senate Banking and Senate Finance Committees need to stop hoping for elusive change and start voting down these highly conflicted nominees for Wall Street regulators coming out of the White House. Their loyalty is not owed to President Obama; it’s owed to the American people.