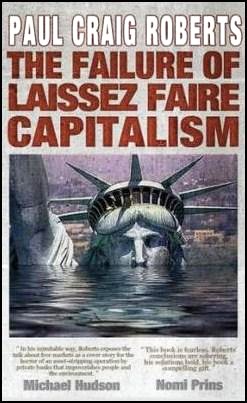 Paul Craig Roberts is one of the most prolific economic writers in America today. As a former Wall Street Journal editor and former Assistant Secretary of the Treasury, Roberts is a walking encyclopedia on monetary policy, economic theory and Wall Street history. After publication in Germany in 2012, his latest book, The Failure Of Laissez Faire Capitalism And Economic Dissolution Of The West, is now available in the U.S. as an eBook.

If you’ve read a Roberts’ column over the past few years, you know there’s nothing timid or constrained in his writing. The same can surely be said for this current work. Roberts expertly details how the one percenters have masterminded a political and economic takeover that just keeps on giving to the one percent as the economy wobbles, the U.S. debt explodes and the middle class is hollowed out.

Roberts sees the last two decades as an era where losses in salaries to the average American worker (as their jobs were moved offshore) reverted back to shareholders and executives in the form of capital gains and performance bonuses from the higher profits that flowed from lower foreign labor costs. “The distribution of income,” says Roberts, “worsened dramatically with the mega-rich capturing the gains, while the middle class ladders of upward mobility were dismantled.”

Roberts does not miss a key construct in how the game was able to continue for so long: “The absence of growth in real consumer incomes resulted in the Federal Reserve expanding credit in order to keep consumer demand growing. The growth of consumer debt was substituted for the missing growth in consumer income.” To make the mountains of debt magically disappear into thin air, it was “securitized, given fraudulent investment grade ratings, and sold to unsuspecting investors at home and abroad.” Now, explains Roberts, the debt has come home to roost: consumers are buried under credit card and mortgage debt and lack the wherewithal to spend.

When the bubble finally burst, says Roberts, “the former bankers running the U.S. Treasury provided massive bailouts at taxpayer expense for the irresponsible gambles made by banks that they formerly headed.” Roberts recounts the fact that an audit of the Federal Reserve – which it fought against for years in court – revealed that it “had provided $16 trillion – a sum larger than U.S. GDP or the U.S. public debt – in secret loans to bail out American and foreign banks, while doing nothing to aid the millions of American families being foreclosed out of their homes.”

Roberts correctly believes that the seriousness of the financial crisis has focused too exclusively on Wall Street without proper focus on the attenuating factor – that the dramatic expansion in consumer debt was used as a substitute for the lack of growth in consumer incomes as jobs were offshored.

If you think about nothing else in this book, think deeply about this paragraph describing why we can’t stimulate our way out of the Great Recession:

“Monetary and fiscal policy cannot help when the problem is that American jobs have been relocated offshore.  Because of offshore production, stimulating demand stimulates production in China and other offshore sites. As high-productivity jobs have been offshored, American incomes, except for the super-rich, have ceased to grow. Thus, there is no effective way to boost consumer spending short of printing money and giving it to the population, or handing out tax rebates accommodated by monetary expansion…Trade deficits mean that consumers have spent their money on goods produced abroad at the expense of domestic GDP and employment growth…”

To this critical piece of the puzzle, I would add that when a country concentrates the majority of its wealth and income within the hands of a tiny numerical percentage of its population, the rest of the population does not have the purchasing power to buy the goods and services produced by the corporations owned by the one-percent class. (According to the Economic Policy Institute, as of 2010, the top 5 percent of the wealthiest Americans own 67.1 percent of all publicly traded corporations while the bottom 80 percent own 8.3 percent.) Thus, we enter a perpetual cycle of mass layoffs and downsizings, producing ever less purchasing power for the masses.  It should serve as a dire warning that Gross Domestic Product (GDP) limped in at a feeble one-tenth of one percent in the fourth quarter of 2012.

Unlike Jack Lew, our newly installed Treasury Secretary, Roberts has no problem laying the blame for the Wall Street collapse in 2008 squarely at the feet of financial deregulation. Lew, a former executive of the mega bailoutee, Citigroup, testified before Congress that he didn’t feel deregulation was the cause. That might have something to do with the fact that with Lew’s blessing, his former boss, President Bill Clinton, is the man who deregulated Wall Street and put the gambling casino/investment banks inside the commercial banks holding insured deposits — an incendiary combination that blew up the marketplace just nine years after Clinton signed the legislation, the Gramm-Leach-Bliley Act of November 12, 1999, overturning the depression era investor protection legislation, the Glass-Steagall Act.

Roberts says in his book, “Not only have the resurrection of laissez faire capitalism and the claim that markets are self-regulating failed, but also the two main justifications of market capitalism have been destroyed by the emergence of financial institutions that are ‘too big to fail’ and by jobs offshoring. If markets do not eliminate failures, then capitalism’s claim to efficiently allocate resources is undermined…”

Capitalism’s claim to efficiently allocate resources stands in stark contrast to the reality of how Wall Street actually operates today. Investors have suffered not one, but two massive scams in little over a decade. First, in the late 90s, investor capital was allocated by Wall Street into pump and dump schemes in dot.com startups glamorized as the New Economy. Writing in the New York Times, Ron Chernow described the ensuing bust as follows: “Let us be clear about the magnitude of the Nasdaq collapse. The tumble has been so steep and so bloody — close to $4 trillion in market value erased in one year — that it amounts to nearly four times the carnage recorded in the October 1987 crash.” Chernow likened the NASDAQ to a “lunatic control tower that directed most incoming planes to a bustling, congested airport known as the New Economy while another, depressed airport, the Old Economy, stagnated with empty runways. The market functioned as a vast, erratic mechanism for misallocating capital across America.”

After this epic failure of capital allocation, one might have expected Congress to set Wall Street back on the road to proper functioning. But instead of bringing new companies with new innovations to market to ensure good jobs in the future, Wall Street turned itself into a manufacturing and warehousing operation for subprime mortgages – debt on residential homes – having nothing to do with innovation or creating new industries for the future.

Roberts explains in his book: “The economic and financial mess in which the U.S. and Europe find themselves,” says Roberts, “and which has been exported to much of the rest of the world is the direct consequence of too much economic freedom. The excess freedom is the direct consequence of financial deregulation…Free market economists have made a mistake by elevating an economy that is free of regulation as the ideal. This ideological position overlooks that regulation can increase economic efficiency and that without regulation external costs can offset the value of production.”

Roberts makes an insightful connection between offshoring manufacturing jobs and the reduced inability of a country to innovate. “No one seems to understand,” says Roberts, “that research, development, design, and innovation take place in countries where things are made. The loss of manufacturing means ultimately the loss of engineering and science. The newest plants embody the latest technology. If these plants are abroad, that is where the cutting edge resides.”

Roberts offers some bold ideas for reform. One stand-out idea is to eliminate management performance pay for short-term profits. Currently, corporate executives of publicly traded companies are forced to focus on the next quarter’s earnings report at the sacrifice of longer term success of the business.

At times, it is hard not to wince at Roberts’ view of the U.S., where he has served in high public office and still resides.  But then again, few people have looked as deeply as Roberts at the problems he describes. In one passage, Roberts writes that “Sixty-seven years after the end of World War II, twenty-two years after the reunification of Germany, and twenty-one years after the collapse of the Soviet Union, Germany is still occupied by U.S. troops. Do Europeans desire a future as puppet states of a collapsing empire, or do they desire a more promising future of their own?”

A few of the chapters you may want to read twice: “The Myth of Benevolent Globalism,” “Where Did the Money Go,” and “Fraud By Banksters.”