Memo to the President and First Lady: Channel Eleanor Roosevelt Not the One Percent 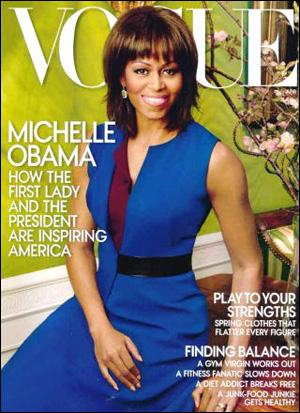 Michelle Obama On the Current Cover of Vogue Magazine

During the Great Depression, the President of the United States, Franklin D. Roosevelt, was rapidly creating programs to address joblessness, poverty and the plight of the homeless. The First Lady, Eleanor Roosevelt, traveled tens of thousands of miles around the country, year after year, to check on those programs and report back to the public in a syndicated column she wrote six days a week titled “My Day.”

In the Great Recession, with 46.2 million Americans living in poverty, including one in every five children according to the U.S. Census Bureau, President Obama is spending his weekends in the Middle East or at a millionaire’s golf club while First Lady Michelle Obama adorns the current issue of Vogue wearing designer clothes costing more than it would take to feed a family of four for a year. This comes on the heels of the First Lady’s February 24th appearance by satellite in another designer gown (a silver, custom beaded tulle by Naeem Khan) to present the best picture award at the Oscars.

The Vogue cover story on the First Lady has an inside photo of her wearing a Michael Kors black top and ballroom skirt. The magazine wants us to know that her hair is by Johnny Wright and her makeup is by Carl Ray. This magazine hits newsstands in the same month that the Coalition for the Homeless is reporting more than 21,000 homeless children in New York City, an increase of 22 percent in the last year and the greatest homeless crisis since the Great Depression.

The Vogue article quotes the First Lady as follows:

“Our job is, first and foremost, to make sure our family is whole. You know, we have small kids; they’re growing every day. But I think we were both pretty straightforward when we said, ‘Our number-one priority is making sure that our family is whole.’ ”

Malia and Sasha, the Obamas’ daughters, have a full White House staff looking after their needs as well as their maternal grandmother living in the White House. Shouldn’t it also be the number-one priority of the President and First Lady of the United States, in the midst of the greatest economic collapse since the Great Depression, to make sure those 21,000 homeless kids in New York City are whole?

This is a statistical snapshot of America today as the Obamas channel the one percent:

The UNICEF report explained the underpinning rationale for doing the study:

“…failure to protect children from poverty is one of the most costly mistakes a society can make. The heaviest cost of all is borne by the children themselves. But their nations must also pay a very significant price – in reduced skills and productivity, in lower levels of health and educational achievement, in increased likelihood of unemployment and welfare dependence, in the higher costs of judicial and social protection systems, and in the loss of social cohesion. The economic argument, in anything but the shortest term, is therefore heavily on the side of protecting children from poverty. Even more important is the argument in principle. Because children have only one opportunity to develop normally in mind and body, the commitment to protection from poverty must be upheld in good times and in bad. A society that fails to maintain that commitment, even in difficult economic times, is a society that is failing its most vulnerable citizens and storing up intractable social and economic problems for the years immediately ahead.”

According to studies done by Branko Milanovic, an economist at the World Bank’s Development Research Group, the U.S. has a higher level of income inequality than Europe, Canada, Australia and South Korea. The depth of the inequality is underscored by a study released last year by the National Bureau of Economic Research, showing that 50 percent of the U.S. population would not be able to come up with $2,000 within 30 days for an unexpected expense.

In a typical “My Day” syndicated column, Eleanor Roosevelt wrote as follows on March 30, 1938:

“Our first stop was at a camp which is being built in cooperation with the vocational education work for rural youth. There is a quarry on the property and the boys have been getting out the stone, cutting it, and putting up buildings. On a number of projects in Georgia, with the cooperation of the labor unions, they are training young people in definite skills and finding them jobs at the end of their training. This saves an employer the waste of training time and assures the employee an adequate wage from the time he or she gets a job.

“We went to Monroe and stopped for a minute at a nursery school run by WPA and where NYA girls are used as assistants. Then we proceeded to a county agricultural high school which seemed to me to have the best practical farm setup I have seen anywhere. Georgia is largely a rural state and there is so much poverty in certain areas which might be improved by better education, that one cannot help rejoicing that these young people are being given an opportunity to change the agricultural life of their state. We passed schools built with the help of WPA and gymnasiums and a number of other vocational buildings and community centers built by NYA.”

Contrast then with now. In his book, Neil Barofsky, former Special Inspector General of the Troubled Asset Relief Program (TARP) explained how the Home Affordable Modification Program (HAMP) did not have a goal of keeping struggling families and children in their homes. It’s real goal, according to former U.S. Treasury Secretary Tim Geithner, was to “foam the runway” for the banks by slowing the process of dumping children and families out on the street. (President Obama, who just secured the confirmation of Jack Lew as Treasury Secretary – a man who took $940,000 in taxpayer bailout funds from Citigroup as a bonus for himself – recently told us that Tim Geithner “is going to go down as one of our finest secretaries of the Treasury.”)

Writing in his book – Bailout: An Inside Account of How Washington Abandoned Main Street While Rescuing Wall Street – Barofsky says:

“For a good chunk of our allotted meeting time, Elizabeth Warren grilled Geithner about HAMP, barraging him with questions about how the program was going to start helping home owners. In defense of the program, Geithner finally blurted out, ‘We estimate that they can handle ten million foreclosures, over time,’ referring to the banks. ‘This program will help foam the runway for them.’

“A lightbulb went on for me. Elizabeth had been challenging Geithner on how the program was going to help home owners, and he had responded by citing how it would help the banks. Geithner apparently looked at HAMP as an aid to the banks, keeping the full flush of foreclosures from hitting the financial system all at the same time. Though they could handle up to ‘10 million foreclosures’ over time, any more than that, or if the foreclosures were too concentrated, and the losses that the banks might suffer on their first and second mortgages could push them into insolvency, requiring yet another round of TARP bailouts. So HAMP would ‘foam the runway’ by stretching out the foreclosures, giving the banks more time to absorb losses while the other parts of the bailouts juiced bank profits that could then fill the capital holes created by housing losses.”

The Democratic Party, which worked so hard to install this President and First Lady for a second term, now need to explain their job to them – the job they were elected to do for all Americans, not just the banks and the one percent. The lives of homeless children and the future of a Nation hang in the balance.