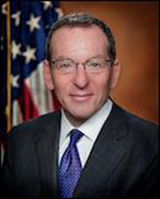 Lanny Breuer, Assistant U.S. Attorney General and Head of the Criminal Division of DOJ Has Announced He Is Stepping Down

Just when one thinks the winks and nods between Washington and Wall Street couldn’t get any worse, there is growing evidence that the U.S. Justice Department knows that 20 banks engaged in the rigging of Libor but is intentionally delaying bringing charges against U.S. banks JPMorgan Chase and Citigroup.

Evidence is also stacking up that while the largest banks in the world were under intensive investigation for rigging Libor, they continued to rig it, while regulators remain dumbfounded about what to do.

And, in an Alice in Wonderland type of development, despite trillions of dollars of financial products resetting based on the Libor index, a key regulator says it’s become a fictional benchmark because the loans between banks that it’s based on have all but disappeared.

Libor is an acronym for London Interbank Offered Rate. It is supposed to be a reliable reflection of the rate at which banks are making uncollateralized loans to each other according to their own submissions. Based on the average of that rate, after highs and lows are discarded, the Libor index is used as a key index for setting interest rates around the world: on many adjustable rate mortgages, credit card payments, student loans, and interest rate swap deals sold by Wall Street to cities, counties, and municipal authorities. Interest rate contracts traded on exchanges are also impacted by Libor.

Libor rate setting is overseen by the British Bankers Association, which represents banking interests. A Libor interest rate is produced for ten currencies over 15 maturity periods from overnight to one year. Each morning, 8 to 16 banks, depending on the currency, submit rates based on this official gauge: “At what rate could you borrow funds, were you to do so by asking for and then accepting inter-bank offers in a reasonable market size just prior to 11:00 a.m. (London time)?” Once rates are submitted, the highest 25 percent and lowest 25 percent are discarded with the remaining submissions averaged. The final calculations are released each day at around 11:30 a.m.

According to the U.S. Commodity Futures Trading Commission (CFTC) “…approximately $350 trillion of notional swaps and $10 trillion of loans are indexed to Libor. Libor also is the basis for settlement of interest rate futures and options contracts on many of the world’s major futures and options exchanges, including the three-month and one month Eurodollar contracts on the Chicago Mercantile Exchange (CME). The total traded volume of the CME Eurodollar contract had a notional value of over $437 trillion in 2009 and $564 trillion in 2011.”

If a trader knows in advance where Libor is to be set, he can make enormous trading profits for the proprietary trading desk (the desk that bets for the house) at big Wall Street firms and other global banks. According to hundreds of emails released by regulators, that is exactly what happened.

According to one released document, a trader named Tom Hayes worked at Citigroup from December 2009 through September 2010, after leaving UBS. In a Bloomberg terminal electronic chat on May 12, 2010, while employed at Citigroup, Hayes stated to a trader at his former firm, UBS: “libors are going down tonight.” The UBS trader asked: “why you think so?” Hayes responded: “because i am going to put some pressure on people.”

It is widely known that a global cartel of banks, including employees of at least two U.S. based Wall Street banks – Citigroup and JPMorgan – engaged in manipulating or attempting to manipulate Libor. But the U.S. Justice Department has charged and settled with only three banks – all foreign. Those banks are Barclays, RBS and UBS. The matter has been under investigation in the U.S. since the spring of 2008 – almost five years – according to Gary Gensler, head of the Commodity Futures Trading Commission (CFTC).

On February 4 of this year, George Osborne, Chancellor of the Exchequer in the U.K. delivered a speech in Bournemouth which included this statement:

“From 2005, traders, brokers and bank officials attempted manipulation of one of the most important reference rates in our economy – a rate which affects the mortgage payments and loan rates of millions of families and hundreds of thousands of firms, large and small; deliberately submitting false rates for no motive other than greed; low balling their Libor submissions to conceal how vulnerable their banks really were. Years of manipulation, in twenty banks on three continents.”

Osborne is the equivalent of the U.S. Treasury Secretary. As such, he would be intimately in the loop on the Libor investigations which are being coordinated between the U.S. and the U.K. Osborne did not say, we think twenty banks are involved; he didn’t say possibly as many as 20 banks are involved. He said flatly “twenty banks on three continents” are involved in “years of manipulation.” And yet, the U.S. Justice Department, whose top brass have heavy ties to Wall Street, has yet to prosecute or charge any U.S. bank in the Libor matter.

Last Thursday, Gary Gensler of the CFTC dropped his own bombshells. Libor was likely still being rigged last year and it’s a fictitious index.

On the continued rigging, Gensler said:

“…we have seen a significant amount of publicly available market data that raises questions about the integrity of Libor today.

“A comparison of Libor submissions to the volatilities of other short-term rates reflects that Libor is remarkably much more stable than any comparable rate. For instance, how is it that in 2012 – if we look at the 252 submission days for three-month U.S. dollar LIBOR – the banks didn’t change their rate 85 percent of the time?

“When comparing Libor submissions to the same banks’ credit default swaps spreads or to the broader markets’ currency forward rates, why is there a continuing gap between Libor and what those other market rates tell us?”

As to Libor having devolved into a meaningless, fictitious benchmark that has been “readily and pervasively rigged,” Gensler clarified as follows:

“First, the interbank, unsecured market to which Libor and other such rates reference has changed dramatically. Some say that it is has become essentially nonexistent. In 2008, Mervyn King, the governor of the Bank of England, said of Libor: ‘It is, in many ways, the rate at which banks do not lend to each other.’

“There has been a significant structural shift in how financial market participants finance their balance sheets and trading positions. There is an increasing shift from borrowing unsecured (without posting collateral) toward borrowings that are secured by posting collateral. In particular, this shift has occurred within the funding markets between banks.

“The London interbank, unsecured market used to be where banks funded themselves at a wholesale rate. But the 2008 financial crisis and subsequent events have shattered this model. The European debt crisis that began in 2010 and the downgrading of large banks’ credit ratings have exacerbated the hesitancy of banks to lend unsecured to one another.

“Other factors have played a role in this structural shift. Central banks are providing significant funding directly to banks. Banks are more closely managing demands on their balance sheets. And looking forward, recent changes to Basel capital rules will take root and will move banks even further from interbank lending.

“The Basel III capital rules now include an asset correlation factor, which requires additional capital when a bank is exposed to another bank. This was included in the new standards to reduce financial system interconnectedness.

“Furthermore, the rules introduce provisions for a liquidity coverage ratio (LCR). For the first time, banks will have to hold a sufficient amount of high quality liquid assets to cover their projected net outflows over 30 days.

“At a roundtable on financial market benchmarks held in London last week, one major bank indicated that the LCR rule alone would make it prohibitively expensive for banks to lend to each other in the interbank market for tenors greater than 30 days. Thus, this banker posited that it is unlikely that banks will return to the days when they would lend to each other for three months, six months or a year.

“Second, we also have learned that Libor – central to borrowing, lending and hedging in our economy – has been readily and pervasively rigged.” (Read the full text of Gensler’s speech at the Global Financial Markets Association’s Future of Global Benchmarks Conference.)

So to recap: hundreds of emails are in the hands of prosecutors and regulators showing that Libor was “readily and pervasively rigged.” JPMorgan and Citigroup are deeply implicated. George Osborne, Chancellor of the Exchequer in the U.K. has flatly stated that “twenty banks on three continents” engaged in the manipulation. Gary Gensler, the head of the CFTC that is charged with regulating the trading of derivatives in the U.S. and opened the investigation in the spring of 2008, is convinced the rigging of Libor continued through last year and that the benchmark is now a fictitious gauge measuring nonexistent loans between banks.

Despite all this, the U.S. Justice Department has charged only three foreign banks after five years of investigations while the charade of setting Libor continues.

And Washington wonders why the public has lost confidence in our financial markets.