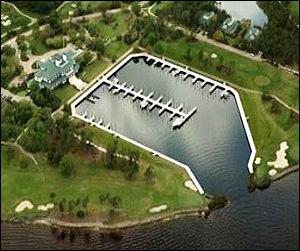 The President of the United States, who told us this past Tuesday evening in his State of the Union address how concerned he is with the middle class, disappeared into a millionaire’s enclave for a three-day bachelor vacation with  pals. According to the White House, Tiger Woods was among those playing golf with the President. First Lady Michelle, and daughters, Malia and Sasha, are skiing out west.

While the President is certainly entitled to rest and relaxation, what he is not entitled to during the greatest economic downturn since the Great Depression is hypocrisy.

Fresh from his State of the Union speech on Tuesday and a speaking tour focusing on how he plans to lift up the poor and middle class, the President flew on Friday evening to the Floridian Yacht & Golf Club in Palm City, Florida, a millionaire’s golfing enclave where cottages rent for $1500 a night and golf lessons can run $3,000 an hour. The initiation fee is a one-time payment of $50,000 and annual dues are $15,000. The facility includes a 61-foot yacht.

Contrast all that against the 46.2 million Americans, including one in every five children, who are living below the poverty rate, defined by the government as $23,021 annual income for a family of four.

The Floridian is owned by Jim Crane, a friend of the President’s and also owner of the Houston Astros baseball team. According to Crane, he greeted the President upon his arrival and said he hoped to play a round of golf with him on Sunday.

In 2001, Crane was CEO of Eagle Global Logistics when the company settled a broad based complaint filed against it by the Equal Employment Opportunity Commission. In the settlement, the EEOC said the company paid “African-Americans, Hispanics and female employees less than Caucasian and/or male employees for performing similar or comparable work.”

The Houston Chronicle reported that Crane told his subordinates not to hire blacks because “once you hire blacks, you can never fire them.”

While President Obama lavished in luxury, the ignored White House Press Corps stayed in a decidedly less elegant Holiday Inn in Port St. Lucie about 20 minutes away. Why the reporters were not told in advance that the President would be off limits to them for three days, allowing them to enjoy a three day weekend with their families back home, suggests more arrogance from the White House.

By Sunday, the White House Press Corps which had not been allowed inside the privileged grounds of the Floridian for even a photo of the President, was boiling over with anger.

Ed Henry, President of the White House Correspondents’ Association, released the following statement: “A broad cross section of our members from print, radio, online and TV have today expressed extreme frustration to me about having absolutely no access to the president of the United States this entire weekend. There is a very simple but important principle we will continue to fight for today and in the days ahead: transparency.”

As the President was spending the weekend hobnobbing with billionaires and millionaires, he released the following remarks in his weekend address:

Hi, everybody. This week, I’ve been traveling across the country – from North Carolina to Georgia to here at Hyde Park Academy in my hometown of Chicago – talking with folks about the important task I laid out in my State of  the Union Address: reigniting the true engine of America’s economic growth – a rising, thriving middle class…

And how do we make sure your hard work leads to a decent living?…

In the coming weeks and months, our work won’t be easy, and we won’t agree on everything. But America only moves forward when we do so together – when we accept certain obligations to one another and to future generations. That’s the American story. And that is how we will write the next great chapter – together.

Apparently, the President plans to govern the Nation by rhetoric alone in his second term. He has thus far nominated a former Citigroup executive (Jack Lew) to be the next Treasury Secretary, a man who took $940,000 of taxpayer bailout funds as a bonus for himself. He has nominated a corporate lawyer (Mary Jo White) to head the SEC; a woman who would be completing her fourth turn through the revolving door and represents the largest firms on Wall Street.

The President needs to understand the next chapter is already being written. And so far, it’s revolting.