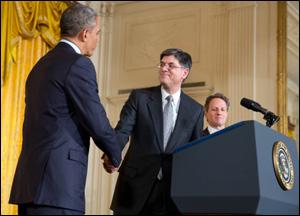 There has been much ado by media and public interest groups about Jack Lew’s time spent at Citigroup and whether that renders him unfit to be President Obama’s nominee to head the U.S. Treasury Department.

Lew sat on Citigroup’s management committee and in his last position at the firm in 2008, he was Chief Operating Officer at Citi Alternative Investments (CAI), the unit that housed a trifecta of toxic speculation, including proprietary trading, hedge funds that were imploding, and the Structured Investment Vehicles (SIVs) that housed $50 billion in subprime debt – an amount that Citigroup understated in financial reports to the SEC and public by $39 billion. It was the SIVs in Lew’s division that toppled Citigroup into the arms of the U.S. taxpayer.

Lew only joined Citigroup in June of 2006. The company had set its course for disaster eight years earlier when, in defiance of existing law, Sanford (Sandy) Weill merged his insurance company, Travelers Group, which owned an investment bank (Salomon Brothers) and a retail stock brokerage firm (Smith Barney) with the commercial bank, Citicorp. This was the very combination outlawed under the Glass-Steagall Act of 1933 and the Bank Holding Company Act of 1956 to prevent banks holding FDIC insured deposits from merging with firms engaging in the much riskier securities or insurance underwriting.

The Glass-Steagall Act had been put in place to prevent the Wall Street abuses that led to the 1929 to 1932 Wall Street crash which saw a 90 percent decline in stock prices and led to the Great Depression. The Citigroup merger effectively forced the hand of Congress to repeal the legislation in 1999 under the rubric of “modernization” or force the breakup of a powerful and politically connected company.

The repeal of the Glass-Steagall Act occurred under the Clinton administration. The U.S. Treasury Secretary at the time, Robert Rubin, played a leading part in advocating for the repeal. Rubin went straight from public service to join Citigroup and collected $120 million in compensation over the next eight years for non-management work. According to the Washington Post, it was Rubin who recommended Lew for the post at Citigroup.

But the question is, why would Lew accept any job with a company that had been splashed through the business press and law journals as a serial predator for years. One would have had to live on a different planet not to know about Citigroup’s scandalous past and serial and ongoing brushes with regulators.

At the time of the Citigroup job offer, Lew was the Executive Vice President and Chief Operating Officer at New York University, a post he had held from 2001 to June of 2006. Why leave a prestigious university to join a scandal-plagued financial institution?

According to the Associated Press, Lew holds an undergraduate degree from Harvard and a law degree from Georgetown University. Surely a man with those credentials reads the business press and a few law journals. From 2002 onward, Citigroup was fined, sanctioned and profiled in the media constantly as a financial institution with a corrupted culture. Below is just a sampling of the milestones.

If Jack Lew’s judgment was so clouded as to leave a well paying university position for a job offer that would pay him millions to join a company perpetually known for skirting the law and having its reputation dragged through the mud, why should we now trust his judgment in the critical role of U.S. Treasury Secretary?

May 28, 2004: The Federal Reserve announces a $70-million penalty against Citigroup Inc. and CitiFinancial Credit Co. over their handling of high-interest-rate “subprime” mortgages and personal loans.

May 31, 2005: SEC announces a $208 million settlement with Citigroup over improper transactions by its proprietary mutual funds.

June 28, 2005: Citigroup agrees to pay the UK regulator, the FSA, $25 million over its “Dr. Evil” trade to manipulate the European bond market.

March 26, 2008: Citigroup settles a suit with Enron creditors for $1.66 billion over claims it aided and abetted Enron in hiding its debt.

August 26, 2008: California Attorney General Edmund Brown Jr. announces a settlement with Citigroup to return all monies improperly taken from customers through an illegal account sweeping program. According to the Attorney General: “Nationally, the company took more than $14 million from its customers, including $1.6 million from California residents, through the use of a computer program that wrongfully swept positive account balances from credit-card customer accounts into Citibank’s general fund…The company knowingly stole from its customers, mostly poor people and the recently deceased, when it designed and implemented the sweeps,” Attorney General Brown said. “When a whistleblower uncovered the scam and brought it to his superiors, they buried the information and continued the illegal practice.”

February 11, 2009: Citigroup agrees to settle lawsuit brought by investors for $2.65 billion over the company’s role in the bankrupt Worldcom, the second largest class action settlement in history at the time.

October 19, 2011: SEC agrees to settle with Citigroup for $285 million over claims it misled investors in a $1 billion financial product. Citigroup had selected approximately half the assets and was betting they would decline in value. Judge Jed Rakoff refused to approve that settlement and the matter is now on appeal.

August 29, 2012: Citigroup agrees to settle a class action lawsuit for $590 million over claims it withheld from shareholders knowledge that it had far greater exposure to subprime debt than it was reporting.