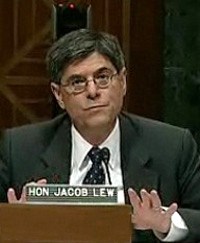 Jacob (Jack) Lew Testifying Before the U.S. Senate on September 16, 2010 On His Nomination as OMB Chief

It has been previously reported that President Obama’s Treasury Secretary nominee, Jacob (Jack) Lew, earned millions in salary and bonus from Citigroup in the brief two and one half years he worked there. That should not come as a surprise to anyone.  Former Treasury Secretary Robert Rubin left his post as Treasury Secretary in 1999 to join Citigroup and was paid $120 million over the next eight years for non-management work.

Citigroup is the mega bank the Securities and Exchange Commission charged with lying about its financial condition while Lew worked there in an executive position.  Citigroup went from lying about its finances in 2007 to cumulatively requiring over $2.51 trillion in Federal Reserve loans, TARP capital and Federal asset guarantees to remain afloat during the financial crisis. During Lew’s stint at Citigroup, July 2006 through early 2009, Citigroup lost 85 percent of its shareholders’ value.

A review of documents submitted to the U.S. Senate Budget Committee for Lew’s confirmation hearing on September 16, 2010 to become Director of the Office of Management and Budget indicates Lew’s financial ties to Citigroup continued long after he joined the Obama administration. The public is being kept in the dark about the extent of Lew’s winnings at the Citigroup casino and its heads we win, tails you lose dealer tables.

One section of the documents (see link below) refers to “Business Relationships” and indicates that Lew had been a limited partner from 2007 through the date of the hearing on September 16, 2010 in the CVCI Private Equity Fund. There is nothing in these documents to enlighten either the Senators or the public that CVCI is an acronym for Citi Venture Capital International, a unit of Citigroup investing billions in foreign companies in hopes of making its limited partners very wealthy.  (A limited partner in a private equity fund is synonymous with being an investor in the fund.)

During the 2010 Senate Budget confirmation hearing of Lew, Senator Bernie Sanders lost patience with Lew for avoiding direct answers to the questions posed.  Lew performed the same maneuver in his written disclosure document to the Senate when asked about conflicts of interest which should have revealed his continuing investment in private foreign deals at Citigroup.

When asked “Will you sever all connections with your present employers, business firms, business associations or business organizations if you are confirmed by the Senate,” instead of stating that he remained a limited partner and investor in a multi-billion dollar fund buying up stakes in foreign companies, Lew gave a decidedly non-responsive answer, writing: “If confirmed, I will remain an employee of the US Government.”

When asked to identify all investments and financial relationships which might pose a conflict of interest, Lew gave this carefully crafted legal dodge:

According to Citigroup, since its inception in 2001, Citi Venture Capital International has invested over $6 billion, generated value of over $11 billion and made distributions of over $8 billion to its investors as of June 30, 2012.  (It is not known how large Lew’s stake in CVCI was or if he remains an investor in the fund. Financial disclosure forms have been requested from the White House.)

CVCI invested billions in companies in Russia, China, India and other low-wage countries during the same years the U.S. taxpayer was giving Citigroup a lifeline to survive.  CVCI’s  investments in companies in the U.S., at a time when American workers were losing their jobs and facing foreclosures on their homes by Citigroup, were a tiny fraction of its foreign company investments.  Nonetheless, Jack Lew found the investment worthy of holding onto after he moved back to government service and a well paid job and pension on the taxpayer’s dime.

Lew had already been working for Hillary Clinton’s State Department as Deputy Secretary of State for Management and Resources for almost two years when he listed the CVCI investment on his disclosure to the Senate.  While his work at the State Department has been depicted as budgetary, Lew’s detailed resume presents a starkly different picture. Under a listing of speeches he had delivered while working at the State Department, Lew notes the following (see link below for additional details):

August 5, 2010: Remarks at Center for Strategic and International Studies (CSIS) on “The Next Phase in America’s Relationship with Iraq”

March 24, 2010: Plenary Remarks at the Opening Session of the U.S. – Pakistan Strategic Dialogue

Adding another level of intrigue to Lew’s time at the State Department, on December 22, 2009, a U.S. ally, Abu Dhabi, sent a cable to the U.S. Secretary of State and U.S. Treasury (while Lew was serving as Deputy Secretary of State) advising that Citigroup had defrauded the country’s investment arm out of $4 billion.  (According to the timeline mapped out by Abu Dhabi in court documents, the fraud took place while Lew was employed at Citigroup.)  According to the confidential cable, eventually published by Wikileaks, William Brown, legal advisor to the Abu Dhabi investment arm, “unequivocally stated that Citi ‘lied’ and must be held accountable.”  My three-month investigation of the alleged Citigroup looting of the Abu Dhabi Investment Authority appears here and here.

Rather than being held accountable, Citigroup received $2.51 trillion of taxpayer largess and slaps on the wrists from its regulators for gross misconduct. What inquiries, if any, were made by the State Department about the Abu Dhabi matter is unknown at this time. The final bonus that Lew received from Citigroup of roughly $950,000 followed multiple quarters of historic losses at the firm. Since Citigroup had no profits, that bonus money was taxpayer money.  It should be immediately returned to the taxpayer by Lew and the President should provide both the Senate and the public with a full disclosure as to Lew’s compensation and investments during and after his decision to collect his paycheck from one of Wall Street’s serial miscreants.

Disclosure Documents Provided by Jacob (Jack) Lew to U.S. Senate Budget Committee in 2010 for Confirmation of His Appointment as OMB Director