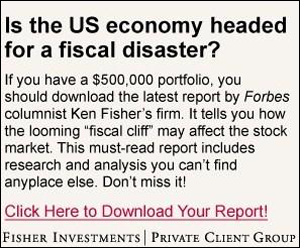 Ken Fisher's Ads Are All Over the Internet

It seems like a day doesn’t go by that an advertisement from Ken Fisher doesn’t pop up on my laptop when I’m visiting a business news web site.  It’s been going on for months.  The ads suggest that I’ll be doomed if I don’t read the latest report from Ken Fisher; it’s a “must read” with research and analysis “you can’t find anyplace else.” And, by the way, if you don’t have $500,000 or more to invest, just fuhgeddaboutit.

Yesterday, I decided to check out this fellow and find out how he can afford all these ads.  Turns out, this Ken Fisher is the financial columnist for Forbes magazine and has defied the destiny of most other business writers in America by becoming a billionaire — worth $1.8 billion as of September 2012 according to Forbes.

But Fisher is not your average 1 percenter – he wants to help you also become a billionaire by simultaneously touting stocks in his columns and managing your money if you have $500,000 or more to invest.  At first blush, that might seem illegal to the sane among us.  Apparently it’s not.  Fisher’s bio says he has been writing his column at Forbes for more than 28 years and he says he has been managing institutional money for 33 years and individual clients’ money for 17 years – all while touting individual stocks on the pages of Forbes.

In his latest column, Fisher touts Walmart, saying it continues to “evolve and adapt,” and “It’s also highly efficient and productive despite the fact that it is the globe’s largest non governmental employer. With Wal-Mart you get an awe-inspiring company at 13 times my January 2014 earnings estimate, with a 2.2% dividend yield.”

Fisher does not mention the not awe-inspiring 21 cent an hour wages paid to garment factory workers in Bangladesh, 112 of whom just died a fiery death in the Tazreen Fashions factory outside of Dhaka because there were no outside fire escapes.  According to documents obtained by the New York Times, 5 of the 14 production lines were making apparel for Walmart.

The Times also reported that “two officials who attended a meeting held in Bangladesh in 2011 to discuss factory safety in the garment industry said on Wednesday that the Walmart official there played the lead role in blocking an effort to have global retailers pay more for apparel to help Bangladesh factories improve their electrical and fire safety.”

Maybe Walmart’s profits are evolving and adapting, but that fire did not feel like human evolution – it felt like a replay of the 1911 Triangle Shirtwaist Factory fire in New York City where 146 garment workers died fiery deaths because the factory owners had locked the doors to the exits to prevent the sweatshop workers from taking breaks.

All those Ken Fisher internet ads were curious to me because of the following. There is an extremely reliable rule of thumb in the retail financial industry: after ten years in the business, if you are doing well by your existing clients, you don’t ever have to advertise for new clients – more than you can handle come from referrals by existing clients.  That was my experience as well.  So why is Fisher spending all that money running all those ads?

In addition to new clients coming in from all those ads stalking internet users, Fisher’s SEC filings explain how referrals come from brokerage firms as well.  (“FI” in the following stands for Fisher Investments.)

“From time to time, FI has client referral relationships with outside vendors and/or independent, unaffiliated third-party custodians which provide services that may include custody of securities, trade execution, and clearance and settlement of transactions. Potential conflicts of interest may arise from these referral relationships, as FI may receive certain economic benefits through its participation in these relationships. In addition, FI may have an incentive to recommend to clients that their assets be held with the third-party custodians with which FI has referral relationships, although there is no direct link between FI’s involvement in referral relationships and the investment advice it gives to its clients. FI also has incentives for its sales personnel to solicit and refer clients. FI occasionally pays a referral fee to third party solicitors. No fee is paid unless a signed contract is executed and the prospective client signs a disclosure form that contains the details of the referral agreement. FI’s participation in referral relationships does not reduce or eliminate FI’s fiduciary duties to put the interests of its clients first and seek best execution in securities transactions on behalf of its clients.”

Under the topic, “Other Compensation,” Fisher Investments adds:

“FI may have obligations under referral programs with custodians with respect to certain clients, including certain clients who become clients of FI as part of its merger and acquisition activities. Pursuant to such programs, FI is obligated to pay the custodian an ongoing fee, usually as a percentage of the fees billed to the account or a percentage of the assets in the account, with a one-time fee generally payable in the event the account is transferred away from such custodian. Since the one-time fee is generally higher than the ongoing fee, FI will have an incentive to maintain the account at the existing custodian.”

There are many curious elements of the above two paragraphs, but none more curious than these words: “its merger and acquisition activities.” Fisher is a columnist touting stocks in a business magazine; he’s written nine investment books, including four bestsellers; he and his firm manage $39.2 billion for 27,600 clients.  And, now we learn he’s also performing the functions of an investment bank, i.e., mergers and acquisitions.

I don’t know about you, but that’s just way too many hats for me.