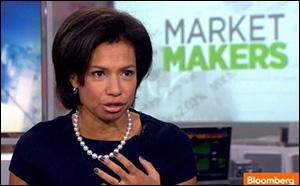 On April 5, 2010, Rolling Stone’s Matt Taibbi famously depicted Goldman Sachs as a “great vampire squid wrapped around the face of humanity, relentlessly jamming its blood funnel into anything that smells like money.”  But if last week’s performance by its human relations department is any guide, the great vampire squid is flailing around in quicksand.

No one in the legal or HR department at Goldman Sachs has apparently ever heard the phrase, if you’re in a hole, stop digging.  With Goldman whistleblower Greg Smith’s book, Why I Left Goldman Sachs, set to launch today and his highly anticipated appearance last night on CBS News’ 60-Minutes (typically watched by 13 million viewers), one would have expected Goldman to hire a sophisticated crisis management firm imbued with some tiny inkling of just how repugnant it and its colleagues on Wall Street are to the average American. Given that reality, a measured response to Smith’s claims with some shred of credibility should have been de rigueur. 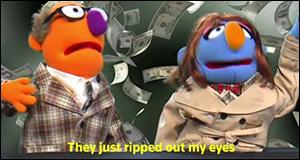 Greg Smith is the Goldman Sachs VP who tendered his resignation after 12 years with the firm on March 14, 2012 via the oped page of the New York Times, famously lamenting “how callously people talk about ripping their clients off. Over the last 12 months I have seen five different managing directors refer to their own clients as ‘muppets.’ ” The muppets phrase instantly morphed into comedic internet memes, including this catchy reworking of lyrics by former Wall Street veteran and law professor Frank Partnoy.  Smith repeated his assertions last evening on 60 Minutes, with poise and conviction.

Last week, instead of a measured response, Goldman went toe to toe with Morgan Stanley as a contender for the worst crisis management response in the history of Wall Street employee scandals.  Goldman Sachs released to the media portions of Greg Smith’s personnel files, including “Smith’s self-evaluations” and “internal e-mails” related to his evaluations, according to Bloomberg News.  One veteran reporter said incredulously to me: “Is that even legal”?

Putting legality aside (something Wall Street does regularly), releasing personnel files when there is not even a court case involved sends a message to all other employees and potential employees of Goldman Sachs that the firm has no respect for an employee’s privacy.  Add that to the long list of other things Goldman has no respect for and they’re making Smith’s case for him.

Next on the heap of crisis mismanagement hubris came Edith Cooper, a former Goldman commodities chief turned Goldman human resources honcho, who took to the airwaves to claim that nothing that Greg Smith said was true. “Our interests are 100 percent aligned with our clients,” said Cooper, wearing purple nail polish in her appearance on Bloomberg News – an affectation only mildly zanier for an investment bank VP than her line of defense.

Cooper’s implausible statement requires an audience that has lived in a cave since early 2008.  As just one example from an infinite supply, on April 16, 2010, two years before Greg Smith made his charge, the Securities and Exchange Commission made the identical charge: Goldman was ripping off its clients.  Here’s the actual wording of the complaint:

“Undisclosed in the marketing materials and unbeknownst to investors, a large hedge fund, Paulson & Co. Inc…played a significant role in the portfolio selection process. After participating in the selection of the reference portfolio, Paulson effectively shorted the RMBS [Residential Mortgage Backed Securities] portfolio it helped select by entering into credit default swaps (“CDS”) with GS&Co [Goldman Sachs & Company] to buy protection on specific layers of the ABACUS 2007-AC1 capital structure. Given its financial short interest, Paulson had an economic incentive to choose RMBS that it expected to experience credit events in the near future. GS&Co did not disclose Paulson’s adverse economic interests or its role in the portfolio selection process in the term sheet, flip book, offering memorandum or other marketing materials provided to investors.”

Let me put that in simple terms: the SEC charged Goldman with knowingly creating an investment product designed to fail so that a hedge fund manager could benefit by shorting it and then sold it to its clients as a good investment.  Goldman settled that complaint for $550 million, the largest penalty ever imposed by the SEC on a Wall Street firm.

Then came the Senate Permanent Subcommittee on Investigations grilling of Goldman Sachs employees on April 27, 2010, where Senator Carl Levin made repeated references to an internal email between two Goldman executives referring to a deal they sold to clients as “one shitty deal.”  The email read: “Boy that Timberwolf was one shitty deal. How much of that shitty deal did you sell?”

Watching Cooper on Bloomberg News, I was instantly reminded of what almost became criminal charges against Morgan Stanley honchos for the way they handled Christian Curry.

Curry was a 6’2, good looking black male from an upstanding family in Westchester.  His father was a prominent surgeon.  During a brief pursuit of a modeling career, Curry allowed a fashion photographer to photograph him nude and foolishly signed a release.  In 1997 Curry joined Morgan Stanley (then known as Morgan Stanley Dean Witter) as an analyst in the firm’s real estate finance department.

As the media was having a field day with the case, Morgan Stanley’s legal department surreptitiously wired $10,000 to a numbered account for the benefit of one Charles Luethke, then buried the payment under an accounting code for a lawsuit settlement of an unrelated matter.  Luethke had set up a sting operation against Curry, involving him in a plan to plant racist emails on Morgan Stanley’s computers, ostensibly to bolster a race discrimination lawsuit by Curry.

When the Manhattan District Attorney issued two grand jury subpoenas to Morgan Stanley, the firm was not forthcoming about the $10,000 payment, leading to the very real possibility that criminal charges could have been successfully brought.  Why charges  were never brought is still a mystery to many on Wall Street. Morgan Stanley settled Curry’s lawsuit, paying $1 million to the Urban League and publicly stating it paid nothing to Curry.  Doubts on that issue abound.

Luethke alleged that Morgan Stanley colluded with police to entrap Curry, offered NYPD  officers jobs if they cooperated in the sting operation and said that Phil Purcell, the firm’s Chairman and CEO at the time, was directly involved in the operation.  Purcell denied involvement.

Morgan Stanley had to finally remove itself from the media circus by accepting the resignation of its General Counsel, Christine Edwards (who stayed on the payroll in some advisory role) and the complete departure of Monroe Sonnenborn, a senior lawyer at the firm. 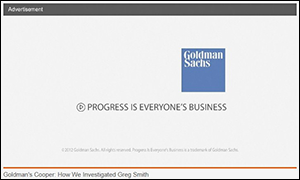 Could Goldman Sachs eclipse the Christian Curry affair with stupid maneuvers?  What was particularly unseemly at Bloomberg News this past weekend was a Goldman Sachs advertisement running each time one clicked on the video of the Bloomberg interview with Edith Cooper, the human resources spokesperson.  Using Bloomberg News as a vehicle to trash one’s employee and turning over employee personnel files is bad enough, but simultaneously lining a news outlet’s pockets with an ad campaign is just so vampire squid-esque.  The ad campaign slogan is: “Goldman Sachs: Progress Is Everyone’s Business.” Memo to Goldman: So is systemic corruption.

The day after Greg Smith published his oped, the reaction of the Mayor of the City of New York, Michael Bloomberg, owner of the Bloomberg media empire, was to race over to Goldman Sachs to cheer up the traders and munch burgers with CEO Blankfein. (Michael Bloomberg’s status as a billionaire derives from his Wall Street businesses.)

And on the very evening that Greg Smith penned his career-ending truth-out on Goldman, the response of Bloomberg News’ was to run an editorial that was thoroughly attacked by their readers as lacking objectivity and merit.  The snarky editorial read in part:

“We have some advice for Smith, as well as the thousands of college students who apply to work at Goldman Sachs each year: If you want to dedicate your life to serving humanity, do not go to work for Goldman Sachs… Goldman and other investment banks do perform an important role in our economy, and Goldman bankers — most of them, at least — can hold their heads up high. But it is not charity work. Goldman’s clients are mostly very well-off. Smith’s lament that the bank no longer serves their needs above and beyond its own does not tug at our heartstrings.”

If you care about the future of America in a highly competitive global landscape and the critical role that honest allocation of capital will play in that future, Smith’s lament should be tugging at your heartstrings. John Paulson made $1 billion on the Abacus deal, only because of Goldman’s perverted view of how financial markets work.  There could have been a client on the rigged losing side of that trade that needed start up capital to become the next Microsoft or Apple or explosive new innovation to fuel job growth in America.  Multiply that scenario by the millions of times it has occurred on Wall Street over the past decade and you start to see why we’re not creating enough jobs in America.

As Goldman was launching its advertising tie-in at Bloomberg with the interview of its human relations spokesperson, Bloomberg columnist William D. Cohan launched a new attack on Greg Smith, calling him a “sweet-talking con man.” Calling the man who is outing the con men a con man suggests Bloomberg News needs to do its own internal review.