Who Speaks to the President of the United States That Way? 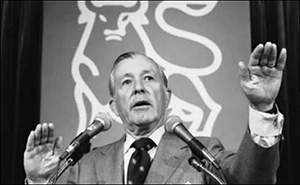 There is an infamous video clip in Michael Moore’s film,  “Capitalism: A Love Story,” where Treasury Secretary, Donald Regan, leans toward the ear of President Ronald Reagan while he is delivering a speech and tells him to “speed it up,” in a manner suggesting he is speaking to his paid puppet.  The President doesn’t do anything to quell that impression, amiably accepting the criticism and continuing on.

According to the account: “In early April, Obama’s economic team congregated in the Oval office for the morning briefing. All the key players were there, except Geithner. After a few moments, the president talked about a resolution plan for Citigroup as a key item in his arsenal, and wondered how close it was to completion. Christina Romer and Larry Summers glanced at each other. They had been talking for nearly a month about how the Treasury Department seemed to be ignoring the president’s clear, unequivocal orders involving Citigroup. Geithner and his team were moving forward with their own favored policy, the stress tests, but they had done virtually nothing about a plan to wind down Citigroup.”

Tim Geithner came to the U.S. Treasury directly from being the subservient enabler to Wall Street as the President of the Federal Reserve Bank of New York, an organization that has as much in common with the other 11 Federal Reserve Banks as the Vatican has with a convent of nuns.

As the regulator to the largest bank holding companies in the country, Geithner had not just failed to properly supervise the Wall Street behemoths, leading to the collapse of the financial system, he had also tolerated outrageous conflicts of interests and cronyism.  One of his many failings was to learn about the rigging of the international interest rate benchmark, Libor, and keep the facts from both Congress and the U.S. Department of Justice.

That a man whose lax oversight led to the largest collapse of Wall Street since the Great Depression was given a promotion to Treasury Secretary of the United States is repugnant.  That he is permitted by our current system of government to ignore directives from the President and lavish tens of billions of taxpayer dollars on a serial miscreant like Citigroup would be a matter for the Department of Justice, if we had a Department of Justice willing to investigate and prosecute Wall Street.  What we have instead is a hollowed out government where those in a leadership position frequently owe fealty not to the American people but to where a big paycheck awaits them: Wall Street.

This leads to the question of where Tim Geithner will next hang his hat.  If Tim Geithner ends up like former Treasury Secretary Robert Rubin, doing the bidding of Wall Street while serving in the Clinton administration, then moving to Citigroup and collecting $10 to $15 million a year in compensation, the stench on the Presidency will continue its unbroken run since Reagan.