Occupy Wall Street to Protest September 17: Why It’s Still the Most Important Thing In the World 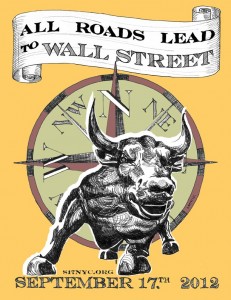 Shortly after the Occupy Wall Street protests began in lower Manhattan in the Fall of 2011, Naomi Klein published a piece at The Nation, heralding the movement as “the most important thing in the world now.”

To the chagrin of Wall Street, Klein succinctly explained to the populace what was coming next from the marauding wealth barbarians unless there was a demonstrative push back from the citizenry:

“If there is one thing I know, it is that the 1 percent loves a crisis. When people are panicked and desperate and no one seems to know what to do, that is the ideal time to push through their wish list of pro-corporate policies: privatizing education and social security, slashing public services, getting rid of the last constraints on corporate power. Amidst the economic crisis, this is happening the world over.

“And there is only one thing that can block this tactic, and fortunately, it’s a very big thing: the 99 percent. And that 99 percent is taking to the streets from Madison to Madrid to say ‘No. We will not pay for your crisis.’ ”

Those who would belittle or marginalize the Occupy Wall Street movement, could not possibly have ever worked within its polished mahogany corridors of power or have first hand insights into its sprawling tentacles.  Wall Street’s power draws its sustenance from the lack of a serious counterforce.  The two party political system is no power drain as it now functions as a provider of continuity government for Wall Street. Congress is no counterforce as members fear the wrath of being de-funded in their next political campaign.  The judiciary lacks any heft since any challenge that might arise in the lower courts receives a swift machete at the amply corporate-anointed U.S. Supreme Court.

Occupy Wall Street was, and is, the most important thing in the world now.  And we will never really know how different our world might be today had not that spirited band of fellow Americans and kindred spirits from abroad convened in the bowels of the financial district and held their outpost through rain and snow, beatings, pepper spray and a cowardly eviction raid by the New York City Police Department; a raid so disgraceful to the City that shelters the Statue of Liberty that reporters were roughed up and barred from observing it.

We will never really know how many others drew courage from this tarp town of democratic action.  We do know that never before had a Judge in the U.S. District Court in lower Manhattan dared to question the formulaic settlements between the SEC and Wall Street, where firms are allowed to pay back millions for stealing billions, without admitting or denying the charges.  But just two and a half months after Occupy Wall Street set up housekeeping in the neighborhood, Judge Jed Rakoff blasted and rejected a proposed $285 million SEC settlement with Citigroup. Sounding unusually like a counterforce, the Judge said in his decision that a Wall Street regulator “has a duty, inherent in its statutory mission, to see that the truth emerges.”  Truth, justice, the American way; when was the last time we read that in a Federal court opinion concerning Wall Street?

Then there was the unprecedented action of Greg Smith, a 33-year old earning $500,000 a year at Goldman Sachs.  Smith took the remarkable route of notifying his employer of his resignation on the OpEd page of the New York Times on March 14, 2012, six months after the onset of Occupy Wall Street.  Smith spilled the beans on the culture inside the mega bank that has so frequently occupied the U.S. Treasury Department: “It makes me ill how callously people talk about ripping their clients off. Over the last 12 months I have seen five different managing directors refer to their own clients as ‘muppets,’ sometimes over internal e-mail,” Smith said. He called the current environment at Goldman “as toxic and destructive as I have ever seen it.”

And now Occupy Wall Street is taking to the streets of lower Manhattan again on September 17 to celebrate its one year anniversary and reinvigorate the public’s will to fight against financial enslavement. The web site for the event with details and time schedules is here.  Will you choose to resist the anti-labor, anti-social security, pro-privatization, continuity government cabal?  Your country, its future, and the future of the Nation’s children hang in the balance.  Right now, the voice of Occupy Wall Street is the only counterforce that can bring meaningful change to Wall Street.

This is their invitation to change the future that Wall Street has in mind:

“For years, people all over the world have been crippled by the corporate greed of the 1%. They built their bonuses out of stolen pensions of teachers, civil servants, and our neighbors. We pay for their welfare. They bet and borrow against our future. We drown in debt. So who is really in debt to whom? Now our elected representatives want us to embrace austerity–work harder for less, retire later (if at all), and say goodbye to our fundamental labor protections. They’re betting on our obedience. They’re betting wrong.

“For every crumbling aspect of our society, the cause of the ruin can be traced back to corporate greed. Follow the money. All roads lead to Wall Street. And in the days and weeks before (and long after) September 17th, we will be here, demanding a system that puts the health of our communities over the profits of the 1%. We are the 99%.

“Can’t join us in NYC? It’s just as important that we Occupy Main Street. Pick a local target that embodies corporate greed—occupy your state Capitol building like the people of Wisconsin, or a chamber of commerce conference as they did in D.C. Take inspiration from revolutionary occupations worldwide, from the railroads of India to the rivers of the Amazon to the streets of Spain. Wall Street has occupied our entire planet. What do you have to say about that?”